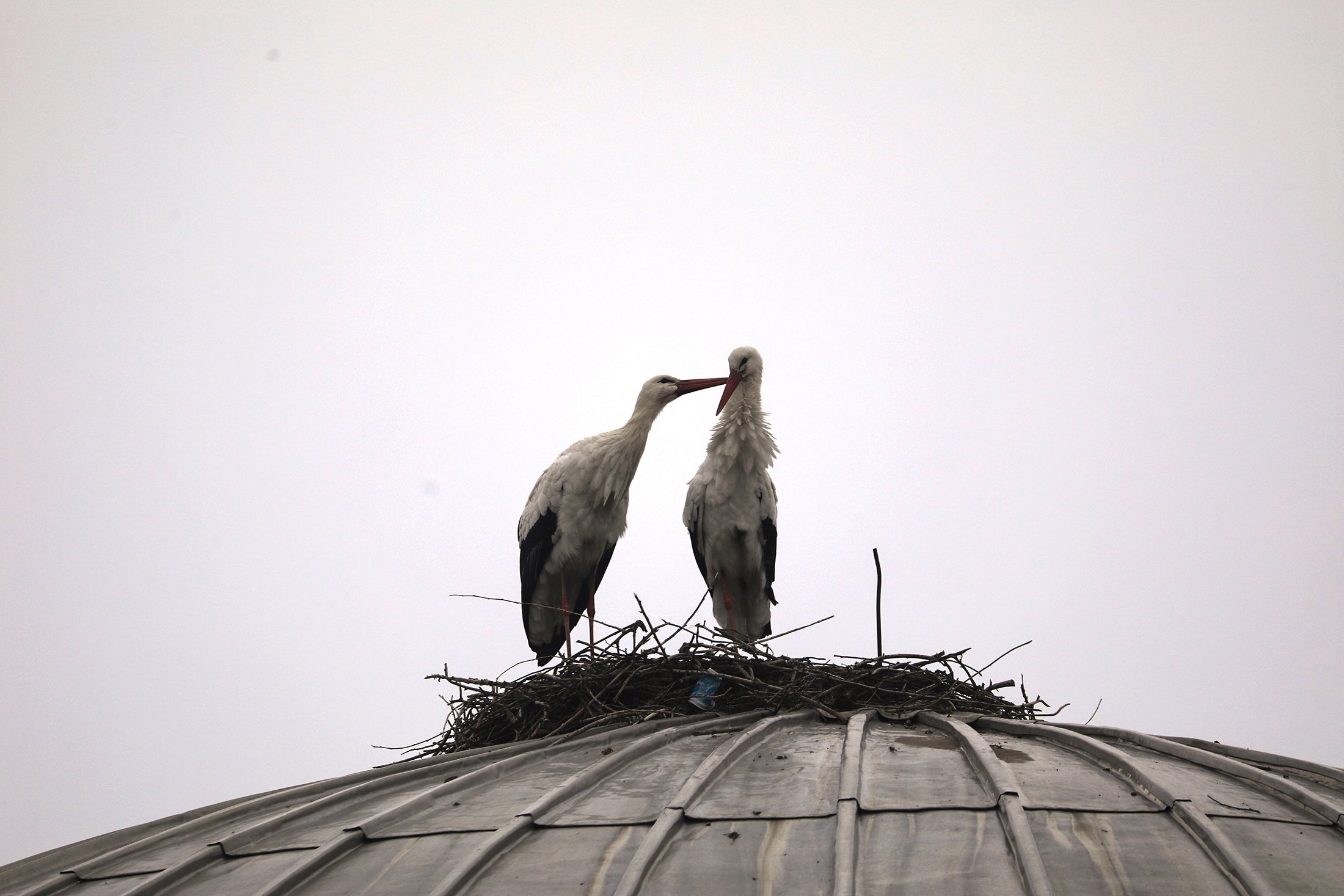 Did you know that Turkey is one of the most important migration spots for more than 400 different types of birds that visit each year? While the Turks have always harbored a great love for birds, evident also in the Ottoman era, there is a special legacy with the beloved storks that will soon be descending upon Turkey throughout the month to come.

Considered the harbinger of spring, storks are just one of the many winged visitors that will be paying a visit to Turkey this spring, where they spend their breeding and nesting season each year. Starting at the end of February and into March will be a special time in the sky, as hundreds of thousands of white storks will arrive at destinations throughout Turkey and a number of villages and nature reserves devoted to these birds excitedly await the arrival each year. The storks use air channels to glide over the sky and then arrive to settle into their nests in high perches, such as on top of poles and treetops (and even ancient columns and mosque domes) as they wait for their babies to hatch.

Storks are loyal to their breeding grounds and will try to return to the same spot every year. Their nests, which are made out of sticks and may weigh anywhere upward of 50 kilograms (100 pounds), are more tended to by the male while the female bird focuses on hatching her chicks. After about a month in April and May, the chicks will hatch, and the mother and father will take turns foraging for food and water to bring back to the nest. What they bring back to the nest varies from insects, earthworms, frogs, rodents, snakes or fish and a successful catch can be a sight to behold for the observer. In mid-summer, the young ones will begin to leave the nest for short test flights, learning to develop the skill of flight by flitting between trees and high spots, as after all by August, they will be setting out on a monthlong journey to return to Africa for the winter months.

A view of the Sanayi Sitesi Mosque and the dome where two storks have nested for the past four years in Bingöl, southeastern Turkey. (AA Photo)

Where to spot storks in Turkey

The most famous stopping grounds for storks in Turkey have to be the tops of columns and Roman aqueducts in the ancient site of Ephesus in Izmir’s Selçuk. Seeing their nests built on ancient relics in the sky provides stunning imagery and five years ago the region began holding a cultural festival devoted to storks and natural living.

In Ankara, storks perch on the historical Column of Julian, erected 1,700 years ago and standing nearly 15 meters (50 feet) tall, making for the perfect spot. Another favorite spot for these birds’ nests is the domes of mosques, such as the one in Antalya’s Döşemealtı, which is famous for its high-flying visitors.

In Istanbul, storks can be seen in the city’s many forested regions and even atop the lofty plane trees of Gülhane Park. There is also the Feneryolu Kuş Gözlem Kulesi (National Parks Bird Observation Tower), which is a bird observatory tower in Sarıyer’s 15 Temmuz Şehitleri Ormanı (15 July Martyrs’ Forest). The tower offers spectacular views of forests and Istanbul’s Yavuz Sultan Selim Bridge, the newest and most northern bridge spanning the Bosporus. There is also a wildlife educational center that offers information on wildlife and bird migration.

Musters of storks have started descending on marshlands in Bursa, northwestern Turkey in the last week of February. (IHA Photo)

The village of Eskikarağaç, which sits surrounded by Lake Ulubat and is located in Bursa’s Karacabey district, is a well-known stopover for storks in Turkey. It has been given the title of “Leylek Köyü” (Stork Village) as a member of the European Stork Villages Union and for 15 years now has hosted an annual “Stork Festival” in early summer with all sorts of fun festivities. A spectacular area in its own right, there is a walking and cycling path around the lake and the municipality has built nesting platforms for the incoming storks.

The interest in storks in the region is undoubtedly due to the couple professor Ismet Arıcı and agricultural engineer and German expat Franziska Arıcı, who are nicknamed “the stork parents.” The two have been tracking storks’ migration patterns at Ulubat Lake and in surrounding regions and founded the “Stork-Friendly Village Project in 2004” to encourage local communities to support the stork population.

The Black Sea province of Samsun hosts one of the largest bird sanctuaries in the country located in the Kızılırmak Delta, one of Turkey’s most expansive deltas and wetlands that is also on the tentative list of UNESCO World Heritage Sites. The delta has one of the most diverse ecosystems with lakes, reed fields, wet meadows and forests and more than 70 of the country’s 480 bird species can be spotted there.

The “Kızılırmak Deltası Kuş Cenneti” (Kızılırmak Delta Bird Sanctuary) has provided nests for the storks to spend the season and to breed with their mates. The sanctuary has a visitors’ center and two bird observation towers and has served as the setting for the Istanbul Bird Migration Festival held over the past few years.

Ohoto shows stork nets at the Stork Forest in the Bafra district of Samsun, Turkey on Feb. 6, 2021. (IHA Photo)

In Turkey, one of the biggest colonies of storks lives in “Leylekler Vadisi” (the Valley of Storks) located in the Beyşehir Lake National Park in Konya, where hundreds of storks can be seen perching on juniper trees. The Beyşehir Municipality also provides 24-hour live broadcasts from cameras set up in this special breeding area if you want to watch the action online.

There is also the Kuşcenneti Milli Park (Bird Paradise National Park) in Balıkesir’s Bandırma district, but unfortunately this year it is closed to visitors due to renovations. Located on Lake Manyas, “Bird Paradise” was Turkey’s first Class A-certified bird shelter with the European Union and the area is home to millions of birds each year from pelicans to herons to storks. For over 30 years now, the municipality has hosted the “International Bandırma Bird Paradise Culture and Tourism Festival” in honor of their winged visitors.

The Manyas Bird Paradise National Park in Balıkesir, northwestern Turkey is a place where thousands of migratory birds stop by for a break. (Shutterstock Photo)

For the love of birds

The Turks have always had an embedded affinity for their winged friends, from training messenger doves to keeping lovebirds and feeding pigeons in Beyazit Square. If the spectacularly ornate Ottoman birdhouses that can be seen attached to the walls of mosques, mausoleums and even residences are not evidence enough, how about the fact that the first and only stork and migratory birds’ hospital in the world was opened in Bursa in the 19th century. Called the “Gurabahane-i Laklakan” (Stork Nursery), the building was actually reopened a decade ago and still serves as a veterinary center.

Last year, Istanbul’s electricity providers isolated power lines for storks to safely perch on as the species’ inclination to rest on pylons and electrical poles can sometimes be dangerous for the birds and lead to electrical outages for us. The word is, millions have been spent on covering over 5,000 electrical pylons with isolating material to protect the storks.

This year, Adem Yılmaz awaits a visit by Yaren the stork to mark their 10th year of friendship. (DHA Photo)

Years ago there was a story of a town in Balıkesir province that halted the demolition of its 50-year-old town hall to replace it as a stork’s nest was discovered on one of the chimneys on the roof. The town waited out the season to start working on the new town hall, which was to be built with a special platform for the storks’ nest for when they next returned.

The true story of a special friendship between a fisherman and a stork that has lasted the past nine years in Eskikaraağaç has become the subject of a 50-minute documentary entitled “Yaren,” which is what fisherman “Adem Amca” named the bird. Every year, the stork would seek out the same fisherman on his boat and together they would while away the seasons. The film was awarded as best documentary at last year’s 2020 International Prague Film Awards.