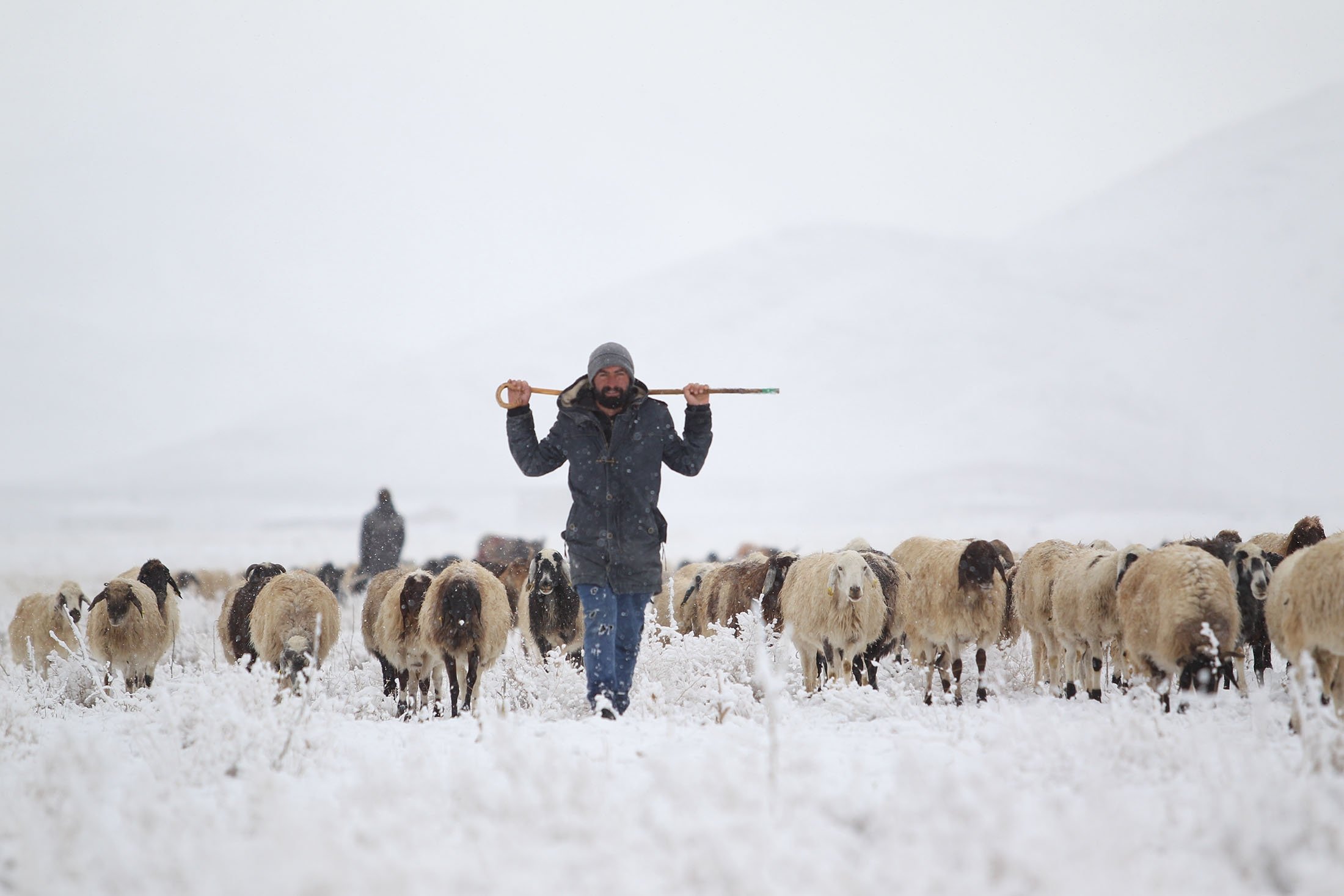 Winter has officially arrived in Turkey as several cities across the nation experienced their first snowfall of the season, which left drivers struggling on slippery roads and children rejoicing in the pristine playground Mother Nature provided.

In the east, in Muş, where the snow had reached a depth of 50 centimeters (19.6 inches), several roads to villages were closed due to the heavy snowfall overnight, and teams set out to clear the roads in the morning after four hours of arduous work.

The mountainous landscape was straight out of a postcard as the ranges of mountains were covered with blankets of snow.

A little to the west, Tunceli’s Pülümür district received the first snow of the year in the city as the town’s center and hills were blanketed in white, with the higher ground seeing as much as 15 centimeters.

Meanwhile, further west, in Bolu’s magnificent ski center Kartalkaya, preparations for the season opening on Dec. 17 were met with a bit of impatience and the snow depth on the slopes reached 20 centimeters with the help of snowmaking machines.

The Kartalkaya Ski Center has always been the preferred destination of thousands of holidaymakers every winter, and this season is shaping up to be no different with 250,000 tourists expected to come to hotels in Kartalkaya.

During the ski season, the site becomes a dream location for ski lovers with 25 tracks boasting a length of 50 kilometers (31 miles) and the snow reaching a depth of 2 meters (6.5 feet).

Halit Ergül, president of the Western Black Sea Hoteliers Association, said that reservations were higher than in previous years. “As hoteliers in Kartalkaya, we are almost on the verge of finishing our preparations,” he said and noted that their guest load was likely to be higher due to people wanting to get away from their homes after spending a year in them due to the global COVID-19 pandemic.

A little more central, in Ilgaz people also enjoyed the first snow of the year – and the upcoming possibility of skiing – as the Yurduntepe Ski Center, located on Ilgaz Mountain, one of the important centers of winter tourism in Turkey, turned white with snowfall.

The snow depth at the Yurduntepe Ski Center has reached 5 centimeters. Gabriel Keleş, one of the visitors at the center, said that they came to the ski resort when they heard that it was snowing.

Although there was not enough snow for skiing yet, the early snowfall this year has given them hope, Keleş said.

“We were greeted by a beautiful view of Ilgaz,” he said and added: “There are estimations that it will snow more in Yurduntepe this year. We believe that this year, after the pandemic, the region will be full of photographers, nature lovers and skiers. We are waiting for heavy snowfall with curiosity and excitement.”

In the Yüksekova district of Hakkari, it also snowed, covering the high parts of the Cilo Mountains in white, while in Van several people were stranded due to heavy snowfall.

People stranded in nine vehicles on the Van-Bahçesaray highway due to snow were later rescued by teams from the municipality.

The vehicles were stranded on the Karabet Pass on the highway, which sits at an altitude of 3,000 meters, after heavy snowfall. Teams cleared the snowy road, allowing the stranded people to reach the town.

The Regional Directorate of Meteorology warned against ice and frost that may occur in the region overnight and in the morning.

To the east and the northeast, Ardahan and Ağrı hosted picturesque views but also caused headaches for drivers as snowfall turned into snowstorms from time to time, causing several roads and highways to be closed, with some in Ardahan unlikely to reopen until spring 2022.

Several trucks were stranded on a highway between Ağrı and Erzurum due to icy driving conditions.

In Bursa’s magnificent Uludağ, one of the epicenters of winter tourism, the snow had accumulated up to 20 centimeters. Hotel operators, which plan to open the season on Dec. 10, said that reservations had already filled 50% of the area’s capacity.

On Uludağ, at an altitude of 2,543 meters, snowfall covered the ground in white.

“This year, the snow came earlier than last year,” said Murat Pınarcı, one of the hotel operators. “The season is going pretty well.”

In addition to the snowstorm, cold and rainy weather continues to hover over the eastern Black Sea region.

Snow graced even the furthest northwestern provinces of Turkey this week, as high parts of Kırklareli were also blanketed in white.