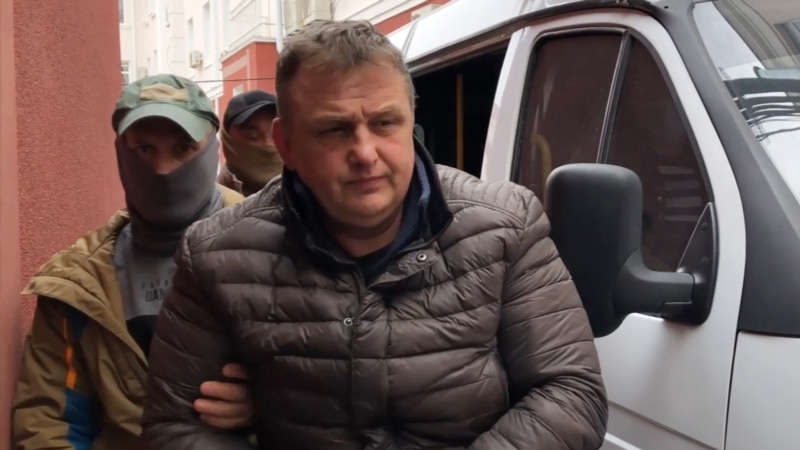 SIMFEROPOL, Ukraine — An RFE/RL freelance correspondent arrested in Ukraine’s Russia-annexed Crimea has told a court he was tortured with electric shocks, beaten, and threatened with being killed unless he “confessed” to spying on behalf of Ukraine.

Vladyslav Yesypenko’s lawyer Aleksei Ladin said on April 6 that his client testified during a closed hearing in court that the torture lasted two days after his arrest in March on what both men say are false charges.

“[Yesypenko] told the court that he was tortured in a basement, most likely somewhere in the area of Balaklava, from the moment of his detention until his transfer to the detention center in Simferopol,” Ladin said after the hearing.

“They tortured him with electric shocks and by beating his legs, his genital area, his body. They beat him to obtain confessions and forced him to incriminate himself… He said they connected some electric contacts to his ear lobes and his head and then switched on electricity that created excruciating pain. When he was more or less getting used to that pain, they continued increasing the power of the electric current,” Ladin added, noting that “all of this had a single goal: self incrimination.”

Ladin also said that his client testified that he was threatened with death, which would be presented to the public as suicide while he was alone in his cell.

Russia’s Federal Security Service (FSB) has said Yesypenko, a freelance contributor to Crimea.Realities, a regional news outlet of RFE/RL’s Ukrainian Service, was suspected of collecting information for Ukrainian intelligence, and claimed that an object “looking like an explosive device” was found in his automobile during his arrest.

The journalist was charged with “making firearms,” which is punishable by up to six years in prison.

Ladin said that a televised interview, in which Yesypenko “confessed” to spying for Ukraine, was staged, with his client saying he was given a written text to read aloud and then answered questions that people in charge of his detention asked.

The interview was broadcast on March 18, eight days after Yesypenko, who has Ukrainian and Russian dual nationality, was arrested in Ukraine’s Russia-annexed Crimea region.

According to Ladin, Yesypenko also said at the trial that he has serious problems with his kidneys and needs medicine for the ailment.

Human rights groups have expressed concerns regarding Yesypenko’s treatment in custody and his televised “confessions,” demanding his immediate release.

RFE/RL President Jamie Fly has also called for Yesypenko’s immediate release and has questioned the circumstances under which he made his confession, saying it appeared “to be forced and made without access to legal counsel.”

Ukraine’s Foreign Intelligence Service has described the arrest as “a convenient attempt to distract the attention of the population away from the numerous internal problems of the peninsula” ahead of the seventh anniversary of its forcible annexation, which was marked on March 18.

The U.S. State Department called Yesypenko’s arrest “another attempt to repress those who speak the truth about Russia’s aggression in Ukraine.”

Graty, a Ukrainian media outlet specializing in police and judicial abuses, quoted a source at Yesypenko’s place of detention as admitting that torture has been involved in the case, while the lawyer chosen by the journalist’s family has not been allowed to see him, according to the Crimean Human Rights Group (CHRG).

This suggests that the authorities are trying to cover up evidence that Yesypenko has been “subjected to illegal methods of investigation, including physical and psychological violence,” the CHRG said.

Yesypenko was detained on March 10 along with a resident of the Crimean city of Alushta, Yelizaveta Pavlenko, after the two had taken part in an event marking the 207th anniversary of the birth of the Ukrainian poet and thinker Taras Shevchenko the previous day.

Russia forcibly seized Ukraine’s Crimean Peninsula in March 2014, sending in troops and staging a referendum denounced as illegitimate by at least 100 countries after Moscow-friendly Ukrainian President Viktor Yanukovych was ousted amid a wave of public protests.

Rights groups say that since then Russia has moved aggressively to prosecute Ukrainian activists and anyone who questions the annexation.

Moscow also backs separatists in a war against Ukrainian government forces that has killed more than 13,200 people in eastern Ukraine since April 2014.