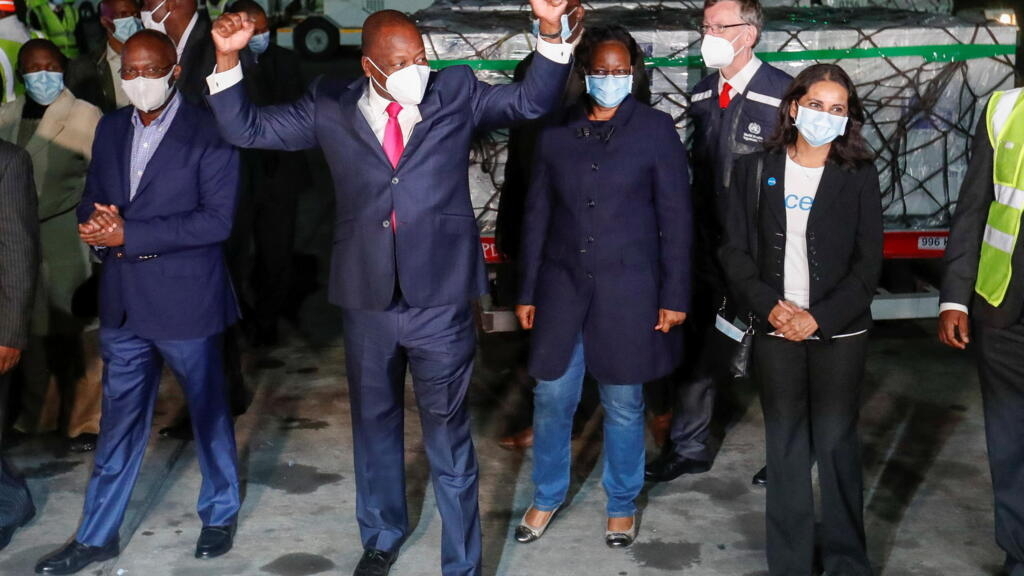 Millions of coronavirus shots from the global Covax scheme arrived in Nigeria, DR Congo and Angola on Tuesday, as African countries ramped up their vaccine rollouts.

While Africa’s most populous country Nigeria received almost four million jabs, DR Congo got 1.7 million doses and Angola welcomed more than 600,000 doses and The Gambia was expected to take roughly 30,000.

Last week, Ghana and Ivory Coast were the first African countries to receive vaccines from Covax, which is aiming to supply two billion doses by the end of the year.

Richer countries have surged ahead with vaccinations but many poorer countries are awaiting deliveries, prompting the World Health Organization (WHO) to warn that the crisis cannot end unless everyone can inoculate their populations.

The Covax facility, run by the WHO along with health NGOs, is aiming to supply vaccines to dozens of countries in the first 100 days of 2021, and two billion doses by the end of the year.

However, there are still critical hurdles for the rollout in vast African countries with sketchy infrastructure and an array of security challenges — a point addressed by Faisal Shuaib, director of Nigeria’s primary healthcare agency.

“States without a functional airport will have their vaccines transported by road using vans with fitted cold cabins, from the nearest airport,” he said.

He called the delivery — which arrived around noon in the capital Abuja — a “good day for Nigeria” and promised the rollout would begin in earnest on Friday with frontline health workers the first to be inoculated.

Nigerian official Boss Mustapha urged traditional rulers, religious leaders, civil society groups and the media to spread the message that vaccinations were needed, adding: “This is a fight for everyone.”

He said the first consignment would be used to vaccinate “health workers, those aged over 55 and people with co-morbidities like diabetes and hypertension,” adding the rollout would begin in full force next week.

In Angola, where some healthcare workers were vaccinated shortly after the doses were offloaded, the WHO’s Djamila Cabral said the arrival of vaccines brought a “stronger hope to save lives”, but warned that everyone needed to continue respecting Covid restrictions to beat the pandemic.

The almost four million AstraZeneca/Oxford doses received by Nigeria, made by the Serum Institute of India, are the first of 16 million shots that Covax plans to deliver over the coming months to the country of 200 million.

The government said it hoped to vaccinate at least 70 percent of its adult population over the next two years and health officials said more than two million people had already registered for the jab online.

“As the vaccines arrive in batches due to limited supply we will inform Nigerians about who and where to receive the vaccine,” Shuaib told reporters.

Nigeria, DR Congo and Angola between them have recorded fewer than 4,000 deaths from roughly 210,000 cases since the start of the pandemic — although official figures in most countries are considered to be underestimates.

A new virus variant has also been discovered in Nigeria, but researchers have not yet determined if it is more contagious or deadly than the original strain.

Covax, an initiative led by Gavi the Vaccine Alliance, WHO and the Coalition for Epidemic Preparedness Innovations (CEPI) with UNICEF as implementing partner, is aiming to deliver 237 million AstraZeneca doses by the end of May.