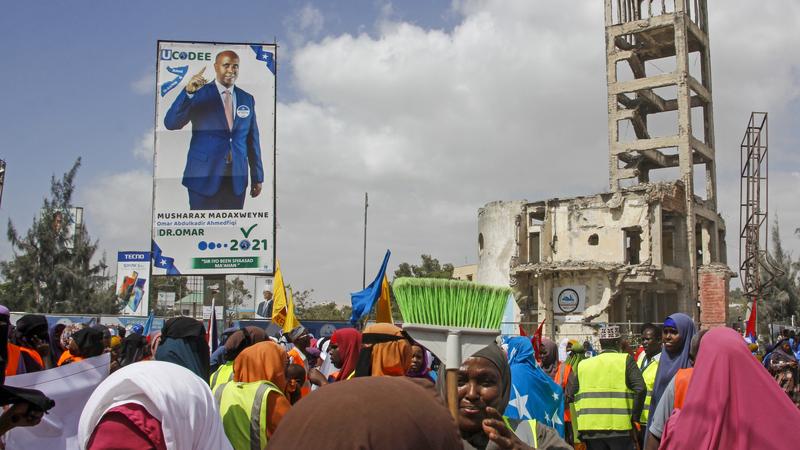 Somalis walk past a billboard showing candidate Omar Abdulkadir Ahmedfiqi in Mogadishu, Somalia on Jan 29, 2021. As Somalia marks three decades since a dictator fell and chaos engulfed the country, the government is set to hold a troubled national election but two regional states are refusing to take part in the vote to elect Somalia’s president and time is running out before Feb 8 on which mandates expire. (FARAH ABDI WARSAMEH / AP)

CAIRO – The Arab League called on all the Somali parties to immediately resume the talks to reach a deal that ensures a national election will be held soon, the pan-Arab body said in a statement on Thursday.

“The Arab League closely follows efforts of the political leaders in the government and leaders of federal member states for concluding an agreement on solving the problems that hinder preparations for the public elections,” it said.

The Arab League demanded “a deal that would prevent any parallel or partial elections that lack wide national consensus.”

It welcomes the call of Somali President Mohamed Farmajo for a new round of consultative talks on Feb 15 to help break the deadlock in the electoral process.

Farmajo, whose four-year term ended on Feb 8, has blamed foreign interventions for the failure of the talks despite compromises from his side. He also accused Puntland and Jubbaland states of refusing to support the pre-election deal.

The UN Security Council, the European Union, and the African Union have warned that delays in the election will only increase the risk of instability in Somalia.

It is worth noting that Somalia’s semi-autonomous Puntland state welcomed the meeting but said the talks should be moved to Mogadishu to ensure the participation of stakeholders and the international community.