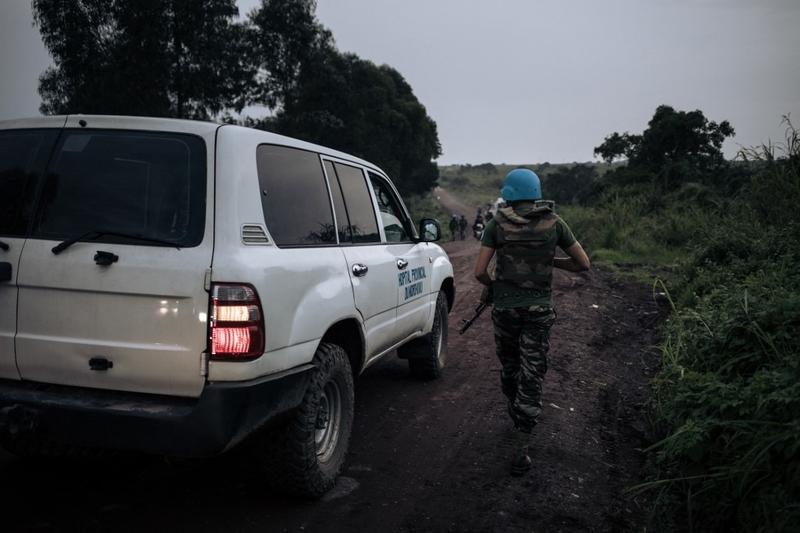 A UN soldier escorts a medical vehicle of the North Kivu hospital on a road on the edge of the Virunga National Park near the village of Kibumba, some 25km from Goma, where Italy’s ambassador to the Democratic Republic of Congo, his bodyguard and driver, were killed earlier when their car came under gunfire while he was on a field trip on February 22, 2021.
(ALEXIS HUGUET / AFP)

GOMA, DRC – An armed group in the eastern Democratic Republic of the Congo (DRC), accused by the government of carrying out an ambush on a United Nations convoy in which Italy’s ambassador and two other people were killed, has denied any involvement in the attack.

The DRC’s interior ministry on Monday blamed a Hutu militia called the Democratic Forces for the Liberation of Rwanda (FDLR), which is active near where ambassador Luca Attanasio, 43 and his bodyguard Vittorio Iacovacci, 30, were shot.

The FDLR was founded by senior Rwandan officers and militiamen who the United Nations and others have said helped orchestrate the 1994 genocide in neighboring Rwanda. It is one of around 120 armed groups operating in eastern Congo.

The Italian diplomat and his retinue were on a humanitarian trip in a United Nations convoy in the territory of Rutshuru, a few kilometers from Goma, the capital city of the province, when they were ambushed

“The FDLR declare that they are in no way involved in the attack,” the rebel group said in a statement on Tuesday, condemning what it called a “cowardly assassination”.

The Italian diplomat and his retinue were on a humanitarian trip in a United Nations convoy in the territory of Rutshuru, a few kilometers from Goma, the capital city of the province.

The FDLR kidnapped two British tourists in the same village in May 2018 and held them for several days before freeing them. The surrounding Virunga National Park, which lies along Congo’s borders with Rwanda and Uganda and is home to more than half the world’s mountain gorillas, then closed for nine months.

Monday’s ambush was carried out by six armed men, who stopped the two-car convoy on the road north from North Kivu’s provincial capital Goma, the DRC’s presidency said.

The attackers lead the seven passengers away from the cars after killing one of the drivers.

Army and park rangers tracked the group and a firefight ensued.

“The kidnappers fired point-blank shots at the bodyguard who died on the spot and at the ambassador, wounding him in the abdomen. The ambassador died of his wounds an hour later at the United Nations peacekeeping hospital in Goma,” the presidency said, adding that it was sending a team to investigate.

Pierre Boisselet from the Kivu Security Tracker, a research initiative that maps unrest in the region, said the FDLR could not be ruled out.

“(But) we haven’t seen, and the government hasn’t shown so far, evidence proving the FDLR’s responsibility at this stage,” Boisselet said.