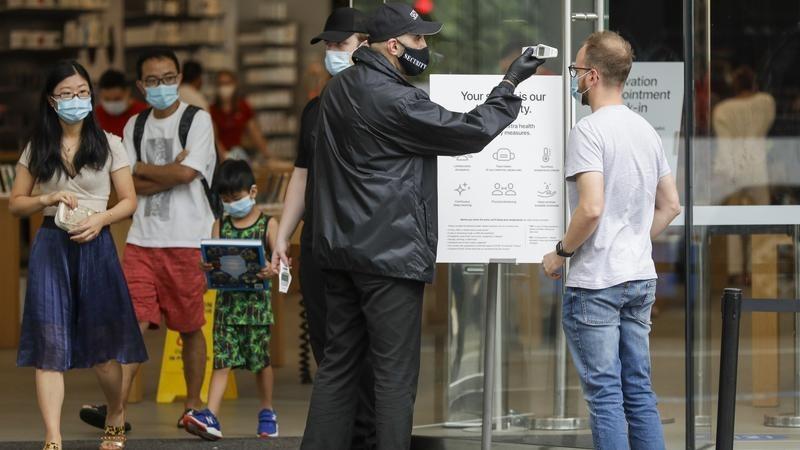 A security guard takes the temperature of a customer at a shopping precinct in Sydney, Australia, Jan 3, 2021. (MARK BARKER / AP)

TEHRAN / RAMALLAH / DOHA – Australia received 300,000 doses of the AstraZeneca PLC vaccine on Sunday, more than doubling the amount of all vaccines shipped to the country so far and allowing the government to ramp up its COVID-19 immunisation drive.

Mass vaccinations for Australia’s 25 million people began on Monday after the arrival of a first batch of more than 142,000 doses of the Pfizer Inc and BioNTech SE vaccine.

“We will now be able to scale up the vaccination rollout to our priority groups, including our most vulnerable Australians and to our frontline border and health workers,” Prime Minister Scott Morrison said in a statement.

Up to 4 million Australians are expected to be inoculated by March, with Morrison being among a small group receiving the first round of the Pfizer/BioNTech vaccine.

Most people will be vaccinated with the University of Oxford/AstraZeneca vaccine. The weekly number of administered doses is expected to reach 1 million by the end of March when CSL Ltd begins to locally produce 50 million of the AstraZeneca doses.

On Sunday, there were no new cases of the coronavirus recorded across Australia, the 30th such day so far in 2021. There have been no related deaths this year.

Australia has fared better than most advanced economies thanks to swift border closures, high community compliance with public health measures and aggressive testing and tracing. It has reported fewer than 29,000 coronavirus infections and 909 COVID-19 deaths.

A February Ipsos poll conducted with the World Economic Forum in 15 countries showed that about three-quarters of Australians intend to take a COVID-19 vaccine.

On Saturday, about 200 people protested the vaccination drive in front of the office of Health Minister Greg Hunt. Hunt said on Sunday that some of the people opposing vaccinations were spreading “false and clearly irresponsible” views.

Southeast Asia’s ride-hailing giant Grab Holdings Inc is setting up drive-thru vaccination services across Indonesia in collaboration with the government to help the nation inoculate more than 180 million people against COVID-19.

The program, which started Sunday on the resort island of Bali, is the first to be done in Southeast Asia, Grab Indonesia President Ridzki Kramadibrata said in a virtual news briefing.

Indonesia has made it mandatory for eligible citizens to take a shot. The nation is aggressively rolling out a mass-inoculation drive as it struggles to contain the largest coronavirus outbreak in Southeast Asia. It plans to vaccinate 70 million people by August, roughly a third of the total target of 181.5 million for the public campaign.

The Maldives has administered the first dose of the COVID-19 vaccine to over 100,000 people, local media quoting the Health Protection Agency (HPA) reported here Sunday.

“We thank the public, health care workers, volunteers and everyone who made this possible,” the HPA announced on Twitter on Saturday.

According to HPA data, 105,492 people have been vaccinated, including 72,872 people in the capital region of Greater Male and 32,620 in the country’s atolls.

The Maldives has a total population of around 557,426 people, according to the National Bureau of Statistics (NBS), meaning that about 19 percent of the population have received the first of two vaccine doses.

The Maldives began vaccinations on Feb. 1 and has procured 1.1 million doses of vaccines, enabling it to inoculate almost the entirety of its population in the next few months.

Prime Minister Prayuth Chan-Ocha on Sunday presided over the kickoff of the program, with a group of healthcare workers receiving the vaccine, state-owned NBT television network showed in a national live broadcast. Prayuth was not inoculated on Sunday as earlier planned because the Sinovac is not recommended for people of his age, Opas Kankawinpong, director general of the Disease Control Department, told a briefing on Saturday.

“Today’s event is to assure the public about the safety of the vaccine that the government will roll out from now on,” said Prayuth. “National vaccination is a major step for the government to go through with this Covid-19 pandemic.”

Southeast Asia’s second-biggest economy aims to inoculate 50 percent of its population by the end of this year as the government tries to reopen its borders, which have been closed for almost a year to curb the outbreak. The government has also approved AstraZeneca Plc’s vaccine and has ordered 61 million doses.

Deputy Prime Minister and Health Minister Anutin Charnvirakul and four other ministers received the Sinovac shot on Sunday. AstraZeneca’s vaccine arrived in Thailand on Feb. 24 but the company still needs to complete the quality-assurance process, it said in a statement on Saturday.

More than 62,000 nurses have contracted COVID-19 in Iran and about 100 of them have lost their lives due to the disease, an Iranian official was quoted by official news agency IRNA as saying on Saturday.

“The sacrifices made by nurses in the past year have alleviated some of the problems of the people during the epidemic, and we should appreciate their efforts,” Deputy Health Minister Mariam Hazrati said in a public tribute in Tehran to nurses died from COVID-19.

Reports on the coronavirus-caused deaths of around 100 nurses are being analyzed under the supervision of the Ministry and the Foundation of Martyrs, and some of the deceased have already been approved to be recognized as “martyrs of service.”

At her daily briefing on Saturday, spokeswoman for Iranian Ministry of Health Sima Sadat Lari said 81 new deaths related to the coronavirus were registered in Iran in the past 24 hours.

And 7,975 new cases of COVID-19 were detected between Friday and Saturday, of which 418 patients had to be hospitalized, according to the spokeswoman.

Schools in the occupied West Bank will shut down for 12 days in an effort to stop a sharp rise in coronavirus variant infections, Palestinian Prime Minister Mohammed Shtayyeh said on Saturday.

High schools will be exempt from the closure which will begin on Sunday, Shtayyeh said in a televised address, adding the new restrictions were prompted by a large number of cases of the British and South African variants in the territory.

Intensive care units for COVID-19 patients have reached 95 percent occupancy in the West Bank and schools have been identified as a major cause for the fast spread of infections, the Ministry of Health said.

On Thursday, it reported that a randomised sample of coronavirus patients showed that more than three-quarters were infected with the British variant.

The World Bank said in a report this week that the Palestinian territories have one of the lowest testing rates in the Middle East and North Africa and that the positivity rate in the West Bank is over 21%, and in Gaza 29%, indicating an uncontrolled spread of the pandemic.

Gaza, where coronavirus restrictions have gradually been lifted since January, has reported 55,091 cases and 549 deaths within its population of 2 million.

With around 32,000 vaccine doses in hand to date, the Palestinians launched limited vaccination programmes in the West Bank and Gaza this month, beginning with health workers.

Two new community cases of COVID-19 were detected on late Saturday. Genome sequencing showed the virus was the more contagious mutated coronavirus variant first found in Britain, and both of them were closely linked to previously known cases of COVID-19 in the South Auckland community. However, the source of this community infection was still under investigation, according to Director-General of Health Ashley Bloomfield.

New Zealand’s largest city Auckland moved up to COVID-19 Alert Level Three and the rest of the country to Alert Level Two from 6:00 am Sunday morning.

Turkey on Saturday reported 9,193 new COVID-19 cases, including 621 symptomatic patients, as the total number of positive cases in the country reached 2,693,164, according to its health ministry.

The rate of pneumonia in COVID-19 patients stands at 4.2 percent, said the ministry.

Meanwhile, 412 more people recovered from the virus, bringing the overall recoveries to 153,219, while the fatalities remained 257 for the sixth day running, according to a ministry statement quoted by QNA.

Lebanon registered on Saturday 3,100 new COVID-19 cases, raising the total number of infections to 372,775 in the country, the Health Ministry reported.

Lebanon received on Saturday the third batch of Pfizer-BioNTech vaccines.

Kuwait reported on Saturday 844 new COVID-19 cases, bringing the total number of confirmed cases in the country to 189,890.

The Kuwaiti Health Ministry also announced six more deaths, taking the death toll to 1,078. The tally of recoveries in Kuwait rose by 1,064 to 178,197, while 10,615 coronavirus-related patients were receiving treatment.

The Kuwaiti government decided on Monday to close land and sea borders from Feb. 24 until March 20 with the exception of shipping operations.

In another statement, the ministry said a batch of China-donated Sinopharm COVID-19 vaccines would arrive in the capital city of Baghdad on Monday.

The Iraqi National Board for Selection of Drugs has approved the emergency use of China’s Sinopharm and Britain’s AstraZeneca vaccines to contain the spread of COVID-19 in the country.

The Bangladeshi government has announced reopening of all the schools and colleges in the country from March 30.

The country’s Education Minister Dipu Moni made the announcement after a high-level meeting on Saturday night. The minister said school and college students will attend classes in person initially.

Students of junior classes will resume their academic activates in phases later, she added.