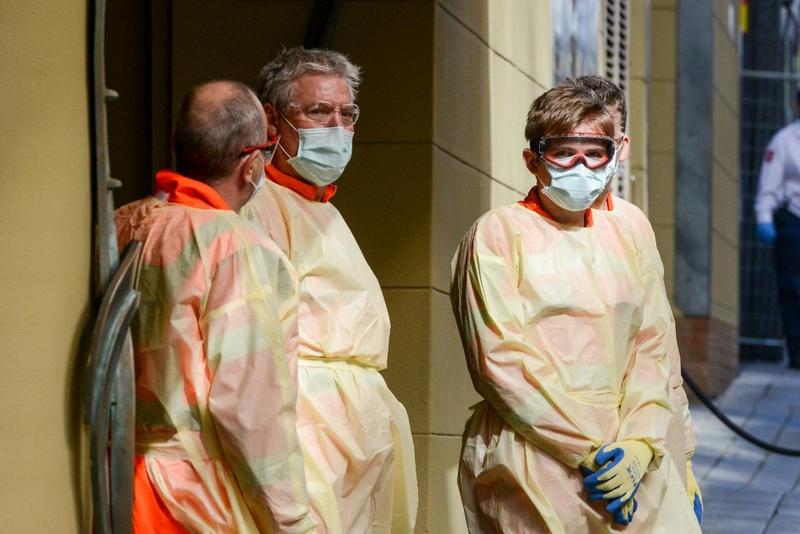 Local officials in protective gear wait at a hotel in Adelaide for the arrival of Australian residents who will go through a mandatory 14-day quarantine on April 21, 2020. (BRENTON EDWARDS / AFP)

SYDNEY / TOKYO / NEW DHLHI / DUBAI / CAIRO – South Australia, one of several states in the country to close domestic borders, on Tuesday cancelled its scheduled reopening to other parts of the nation, citing a spike in coronavirus infections in neighbouring Victoria.

The country’s fifth most-populous state had said it would remove restrictions on interstate arrivals on July 20 as part of a broader nationwide relaxation of curbs to contain the new coronavirus.

However, Victoria has reported a double-digit increase in new cases for each of the past 13 days, resulting in Australia’s biggest daily increase in new cases since April. The delays reopening internal borders cast doubts over a federal plan to set up “travel bubble” with neighbouring New Zealand that would allow movement between the two countries.

Australia has fared better than many countries in the pandemic, with around 7,800 cases and 104 deaths, but the recent surge has stoked fears of a second wave. After reporting 75 new cases on Monday, Victoria has not given a daily update of case numbers on Tuesday.

Bharat Biotech’s COVID-19 vaccine has been approved for human trials, making it India’s first domestic candidate to get the green light from the government’s drug regulator as cases surge in a country with more than 1.3 billion people.

The Drug Controller General of India has approved the company’s application to conduct a Phase I and II clinical trial of Covaxin, which was developed along with the Indian Council of Medical Research’s National Institute of Virology, the company said in a statement on Monday.

India on Monday announced a new set of guidelines, which will come into effect from July 1, to further ease restrictions on the lockdown imposed by Modi’s government to curtail the spread of the coronavirus.

Iran, the hardest-hit country by the COVID-19 pandemic in the Middle East region, reported 2,536 new cases, bringing the total number of infections to 225,205.

The pandemic has so far claimed the lives of 10,670, up by 162 in the past 24 hours, the its highest number of deaths from COVID-19, official health ministry figures showed on Monday.

A total of 186,180 patients have recovered in Iran while 3,037 remain in critical condition.

The country also reported 83 fatalities and 1,852 recovered cases from the coronavirus during the day, bringing the death toll in Iraq to 1,839 and the total recoveries to 22,974.

The deaths from the virus in Israel increased by one to 319 while the recoveries rose to 17,218.

It is worth noting that the number of active cases in Israel rose to 6,904, the highest since April 30.

The country said it would add 18 countries to its entry ban from July 1, according to a June 29 posting on the foreign ministry website. That brings the total number of countries subject to Japan’s entry ban to 129.

The country will resume commercial flights at Kuwait International Airport from Aug. 1 under a three-stage plan, the first of which will be at a maximum of 30 percent capacity. 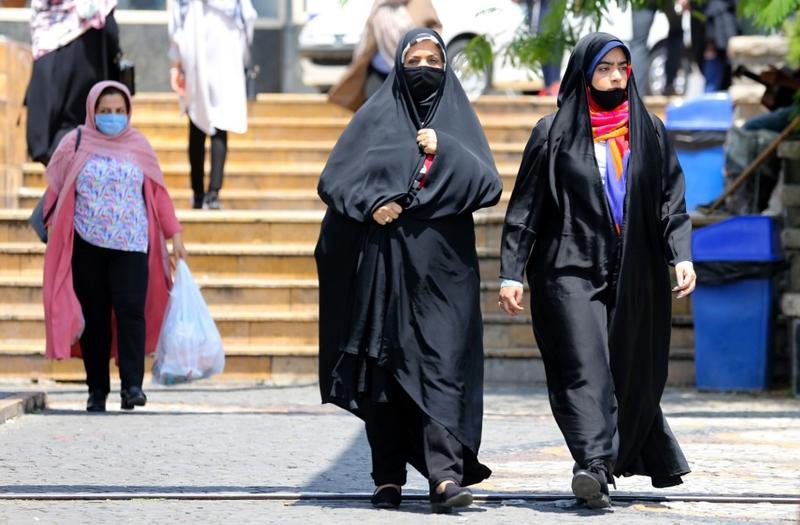 Pedestrians wearing protective masks due to the COVID-19 coronavirus, walk along a street in the Iranian capital Tehran on June 28, 2020. (ATTA KENARE / AFP)

Lebanon, the number of COVID-19 infections increased by five to 1,745, while the death toll remained unchanged at 34.

Oman’s Ministry of Health announced 910 new cases of infections, raising the tally in the country to 39,060, including 169 deaths and 22,422 recoveries.

Palestine reported 195 new COVID-19 cases, bringing the total number of infections in the Palestinian territories to 2,443, including 621 recoveries and eight deaths.

Syria reported 13 new COVID-19 infections, taking the tally of confirmed cases to 269 in the country including 102 recoveries and nine deaths.

ALSO READ: Japan will not yet invoke emergency despite spike in cases

The death toll from the coronavirus in the country rose to 5,115 after 18 new fatalities were added in the past 24 hours, he said, adding that 1,214 more patients recovered, raising the total recoveries to 171,809.

Turkish president announced that the country will extend a wage support system covering workers whose working hours are reduced by their employers, and a financial aid program for low-income families for one more month to ease the impact of the pandemic.

The United Arab Emirates (UAE) announced 449 new COVID-19 cases and one more death, raising the tally of infections to 48,246 and the death toll to 314.

The total number of recoveries from the virus in the UAE increased to 37,076 after 665 more fully recovered.

The total number of coronavirus cases in Yemen’s government-controlled provinces increased to 1,128 after 10 new cases were added.

The number of recoveries in the government-controlled areas, including the southern port city of Aden, increased to 432 and the death toll climbed to 304.