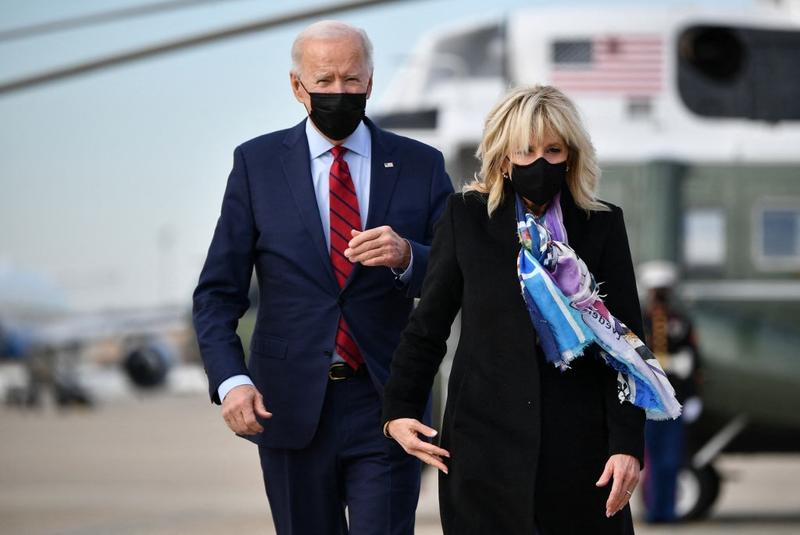 US President Joe Biden and First Lady Jill Biden arrive to board Air Force One before departing from Andrews Air Force Base in Maryland on February 27, 2021. (MANDEL NGAN / AFP)

President Joe Biden called it “outrageous” that Saudi Arabia’s Crown Prince Mohammed bin Salman signed off on the killing of Washington Post columnist Jamal Khashoggi, and cast ahead to an announcement about the kingdom next week.

Biden said in an interview with Univision News that he told Saudi King Salman this week that “the rules are changing” in the kingdom’s relationship with the US and promised “significant changes” on Monday.

The prince has denied involvement in the killing and the kingdom rejected what it called a “false” US narrative. No sanctions have been announced against him.

The Biden administration on Friday released a partially redacted report the Trump administration withheld from the public revealing that the US intelligence committee believed the crown prince was responsible for Khashoggi’s October 2018 murder inside the Saudi consulate in Istanbul.

“It is outrageous what happened,” Biden said.

Saudi stocks fell on Sunday, the first day of trading in Riyadh after the release of the report.

The report builds on classified intelligence from the CIA and other agencies. The kingdom dismissed it outright.

“The government of the Kingdom of Saudi Arabia completely rejects the negative, false and unacceptable assessment in the report pertaining to the Kingdom’s leadership, and notes that the report contained inaccurate information and conclusions,” the Saudi Foreign Ministry said in a statement.

The prince has said he accepts symbolic responsibility for the killing as the country’s de facto ruler. Saudi officials have said the murder was carried out by rogue agents who’ve since been prosecuted. Relevant authorities took “all possible measures within our legal system” to ensure those agents were properly investigated and that justice was served, the statement said.

The decision to release the report, compiled by the Office of the Director of National Intelligence, reflects the Biden administration’s determination to recalibrate relations with Saudi Arabia, the world’s largest oil exporter, over its human rights record.

Although the four-page declassified version didn’t disclose any direct evidence or the US intelligence methods that were used in reaching its conclusion, it said the team that killed Khashoggi included seven members of the crown prince’s “elite personal protective detail” who wouldn’t have taken part without his approval.

“The Crown Prince viewed Khashoggi as a threat to the Kingdom and broadly supported using violent measures if necessary to silence him,” the report said. The report said it had “high confidence” about the 21 people who were involved in the killing on the prince’s behalf.

At least for now, there is no indication that the US plans to sanction the crown prince. That’s in keeping with a broader assessment that he’s destined to be the kingdom’s ruler for years to come and punishing him now would risk alienating a country that, for all its flaws, remains a crucial ally.

Saudi Arabia dominates the Gulf Arab region geographically, is its economic powerhouse, and has for decades been a political heavyweight in regional affairs. It’s also one of the biggest customers for American arms.

Biden will have to navigate the relationship with Saudi Arabia carefully, however, as he seeks to re-engage Iran and persuade it to resume compliance with the nuclear accord. Signaling that being tougher on Saudi Arabia won’t mean he’s soft on Iran, the administration ordered airstrikes overnight on Iranian-backed militias in Syria that it blames for rocket attacks on US forces in neighboring Iraq.

“There will be an announcement on Monday as to what we are going to be doing with Saudi Arabia generally,” Biden told reporters as he departed the White House on Saturday for his home in Delaware.

After the report was released, Secretary of State Antony Blinken announced sanctions against 76 Saudi individuals under what he called a new “Khashoggi Ban” policy. Under that authority, the US says it will single out anyone who, acting for a foreign government, engages in “counter-dissident activities” beyond that country’s borders.

State Department spokesman Ned Price had told reporters Thursday that the US was looking at other ways to punish the perpetrators of Khashoggi’s killing. Among the options may be cutting back arms sales to Saudi Arabia, he said without elaborating.

The decision to release the report reflects a return, under Biden, to routine diplomatic channels and traditional US pressure over human rights, even on allies.

Trump put Saudi Arabia at the center of his Middle East strategy, making it his first foreign visit. He later abandoned the 2015 nuclear deal with a common enemy, Iran, and reimposed sanctions on Tehran.

Trump dismissed concerns about whether the crown prince approved the Khashoggi killing — “Maybe he did, maybe he didn’t,” he said — citing the economic rewards of selling arms to the Saudis. His secretary of state, Michael Pompeo, said the US had “no direct evidence” linking the prince to the murder, while Trump’s son-in-law Jared Kushner maintained a close working relationship with him.

In contrast, within his first few days in office, Biden put on hold major weapons sales to the kingdom pending review, and announced an end to US support for offensive actions in Yemen. In an overt rebuke, he also downgraded relations with Prince Mohammed, who runs the day-to-day affairs of the kingdom and typically liaises directly with foreign leaders. Instead, Biden has called King Salman his official counterpart.