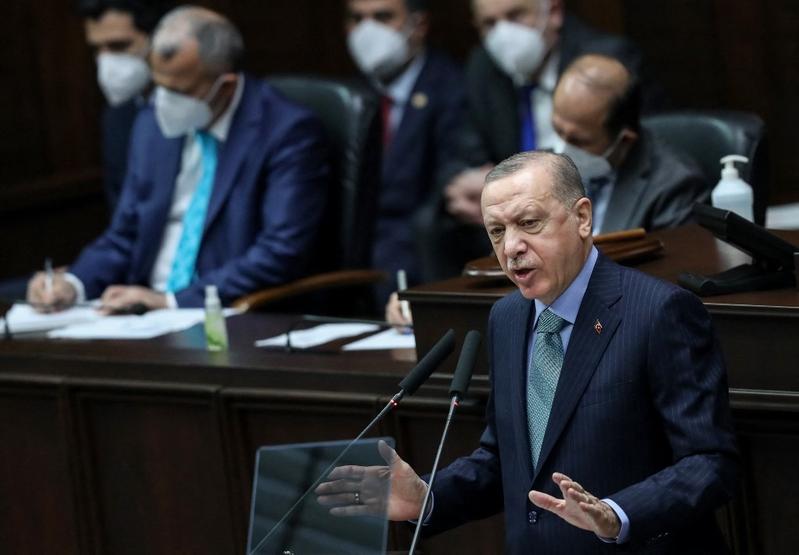 Turkish President and leader of the Justice and Development Party (AK Party) Recep Tayyip Erdogan delivers a speech during a meeting of members of the AK Party at the Turkish Grand National Assembly in Ankara, on Feb 24, 2021. (ADEM ALTAN / AFP)

ANKARA – President Tayyip Erdogan said on Tuesday that Turkey would strengthen the right to a fair trial as well as freedoms of expression and organisation in the country as part of what his government has called a Human Rights Action Plan.

Critics say Erdogan’s government applies political pressure on the judiciary, which has been bent on punishing thousands of the govt’s perceived opponents since a failed coup in 2016

The plan, promised in recent months as part of a series of legal and economic reforms, would also improve the judiciary system, Erdogan said at the presidential palace in Ankara.

No one can be deprived freedom because of their thoughts, said Erdogan, who has faced criticism both at home and abroad for his increasingly autocratic rule over the NATO member country.

As part of a nine-point plan, Erdogan outlined measures to improve the judicial system in areas including nationalisation of land and the trial of minors, to steps to ensure a speedy trial and ease business conditions. He said the government was reviewing prosecution of crimes related to the press and internet.

“Improving freedom of expression, organisation and religion…is the goal we have so far worked the hardest on,” he told ministers and other government officials.

“We will not water every flower we see,” Erdogan added. “While watering a flower with its head bent means justice, watering a thorn means cruelty.”

Critics say Erdogan’s government applies political pressure on the judiciary, which has been bent on punishing thousands of the government’s perceived opponents since a failed coup in 2016. Ankara says courts are independent and it has acted in the face of threats to the country.

The court, whose rulings are legally binding, says such detentions violate human rights and only serve to limit pluralism and political debate.

Erdogan added on Tuesday that a committee would be set up to observe human rights conditions in prisons and that a human rights report on Turkey would be published annually.