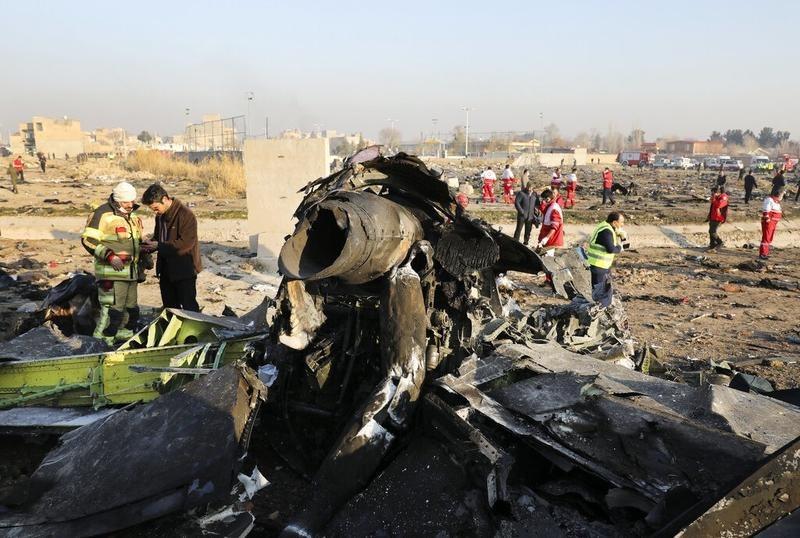 This Jan 8, 2020 file photo shows debris at the scene where a Ukrainian plane crashed in Shahedshahr, southwest of the capital Tehran, Iran. (EBRAHIM NOROOZI/AP)

PARIS / OTTAWA – France said on Friday it would download the black boxes from a Ukrainian airliner shot down by an Iranian missile in January, easing a stand-off over where they should be read. France’s BEA crash investigation agency said it was acting at the request of Iran, which remains responsible under global rules for conducting a formal accident probe after acknowledging that the Boeing 737 was downed by its forces.

Work on repairing and downloading the cockpit voice and data recorders will begin July 20, the BEA said

The Ukraine International Airlines flight was shot down on Jan. 8 by an Iranian ground-to-air missile, killing 176 people in what Tehran termed a “disastrous mistake” at a time of heightened tensions with the United States.

Work on repairing and downloading the cockpit voice and data recorders will begin July 20, the BEA said.

Aviation authorities in Canada, 57 of whose citizens were killed, said they would send a team to Paris to participate.

A spokesman for the US National Transportation Safety Board said the agency is “still participating in the investigation as the state of manufacture through our US accredited representative” but did not say if officials would travel to France to participate.

Iran wants Canada to reestablish diplomatic ties that were broken off in 2012 but Tehran did not set this as a precondition for sending the recorders to France, a Canadian official said.

“It is not realistic to expect us to entertain any kind of discussions about this any time soon,” said the official, who requested anonymity given the sensitivity of the situation.

Canada’s priorities were a full probe into the crash and compensation for families of the victims, the official added.

Iran’s envoy to the United Nations aviation agency said this month that the country’s Air Accident Investigation Board had asked the BEA to read the black boxes, though this was followed by conflicting ministerial statements.

Friday’s announcement suggests Western and Iranian officials will jointly witness the technical work, though one person following the case did not rule out last-minute changes.

The BEA has a history of assisting with sensitive probes when tensions are high between parties directly involved.