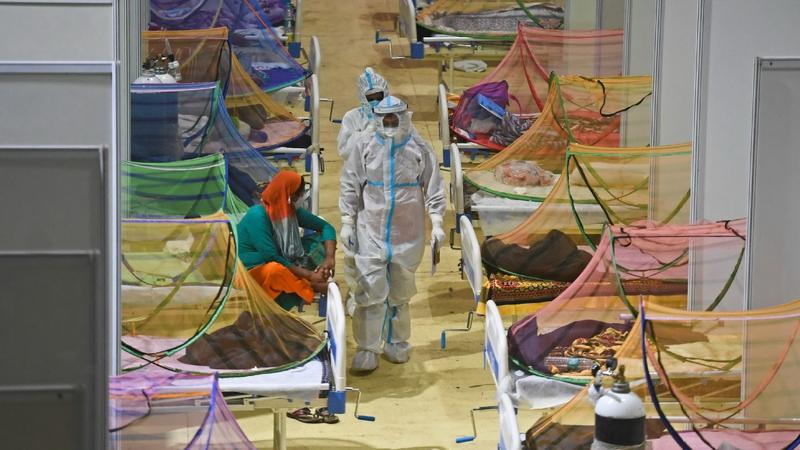 Health workers attend to COVID-19 patients at a facility at the Commonwealth Games village temporarily converted into a COVID care facility in New Delhi, India, on May 2, 2021. (TAUSEEF MUSTAFA / AFP)

The COVID-19 figures continue to peak in the country every day, but the federal government has ruled out imposing a complete lockdown to contain the worsening situation. Some states have imposed night curfews or partial lockdowns.

Officials in Tamil Nadu said the state-wide lockdown would begin on Monday and last until May 24. Shops and other businesses will be allowed to open on Saturday and Sunday to give residents time to prepare for the sweeping shutdown.

Neighbouring Karnataka, home to India’s tech capital Bengaluru, announced late on Friday it was extending movement restrictions, also until May 24.

The Japanese government said on Friday that it will tighten restrictions on Japanese nationals and residents arriving here from India, Pakistan and Nepal, amid concerns over highly transmissible virus variants wreaking havoc, particularly in India.

The stricter measures will come into effect from Monday, the government said, and will involve requiring passengers arriving from either of the three countries to stay in quarantine facilities designated by the government for six days.

Non-resident foreigners, such as tourists, are still banned from entering Japan, unless they have qualified for a visa stipulating their visit falls into the category of “special exceptional circumstances.”

Thailand reported 2,419 new cases on Saturday, the highest single-day tally in two weeks, as its capital Bangkok remained a hotspot for infections.

The Bangkok Metropolitan Administration late Friday ordered an extension of containment measures including closure of schools, entertainment venues and a ban on dining in restaurants by more than a week to May 17.

Thailand remains in the grip of a third wave, the worst to hit the nation since the pandemic began. New cases and deaths have almost tripled since the end of March with the emergence of a new outbreak tied to nightlife entertainment venues in Bangkok, which has since spread to much of the nation. Total cases have risen to 81,274 from 28,863 at the end of March, while deaths have soared to 382 from less than 100, official data show.

Turkey on Friday confirmed 20,107 new COVID-19 cases, including 2,210 symptomatic patients, raising the total number of cases in the country to 4,998,089, according to its health ministry.

The rate of pneumonia in COVID-19 patients stands at 3.2 percent and the number of seriously ill patients is 3,260 in the country, said the ministry.

The National Taskforce for Combating COVID-19 announced that, as part of a new phase of vaccination drive, the third dose will be given after six months to those aged 60 and above, people with chronic health conditions and health care workers.

It added that all other categories of vaccinated individuals can receive the third booster shot a year after they have taken their second dose.

It further added that individuals have a choice to select the same or different type of vaccine for the third booster shot.

Myanmar reported 31 new COVID-19 infections, bringing the tally to 142,934 on Friday, according to a statement from the Health and Sports Ministry.

Vietnam’s Ministry of Health on Friday reported the death of a health worker who received the AstraZeneca vaccine against COVID-19, the country’s first death related to the vaccine.

The 35-year-old female health worker in the southern An Giang province died on Friday due to anaphylaxis, which was a very rare case in the practice of vaccination against COVID-19, according to the ministry.

The health worker got the injection on Thursday and had an adverse reaction after that, with an underlying condition identified as an allergy to non-steroidal anti-inflammatory drugs. She was treated in accordance with emergency procedures, said the ministry.

The Southeast Asian country has inoculated around 750,000 people against the coronavirus since it started its vaccination campaign early March, according to the ministry. All of the shots used are from AstraZeneca.

Meanwhile, the ministry reported 47 new infections on Friday, raising the total number of cases in the country to 3,137, with 35 deaths. 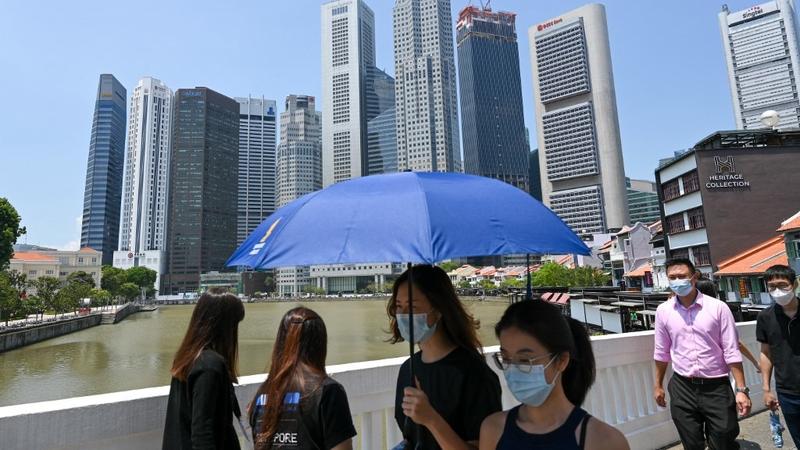 People walk along a bridge next to the financial business district in Singapore on April 20, 2021. (PHOTO / AFP)

Singapore will reduce approvals for foreign workers planning to enter the country in the coming weeks, and delay the arrivals of many of those already approved to enter, the government said Friday.

The move, aimed at reducing imported cases of COVID-19, came hours before Singapore is set to launch a three-week crackdown that will limit the size of group gatherings to five. The government earlier this week had already extended travel quarantine to 21 days from the current 14, except for travelers from lower-risk places.

Under the new measures, the city-state will stop accepting new entry applications for work pass holders from higher-risk countries with immediate effect, except for those “needed for key strategic projects and infrastructural works.”

Of the new cases, 21 are imported cases and four are community cases. Among the cases in the community, one is linked to a previous case and three are currently unlinked.

Altogether 31 people have passed away from complications due to COVID-19 infection.

The Qatari Health Ministry on Friday announced 600 new COVID-19 infections, raising the total number of the confirmed cases in the Gulf state to 210,070, the official Qatar News Agency (QNA) reported.

Israel’s Ministry of Health reported 41 new COVID-19 cases on Friday, raising the total number of cases in the country to 838,858.

The death toll from the virus increased by four to 6,375, while the number of patients in serious condition remained unchanged at 87, out of 156 hospitalized patients.

The number of people vaccinated against COVID-19 in Israel has reached nearly 5.42 million, or 58 percent of its total population.

It also said that 18,588 people were vaccinated against the COVID-19 during the past 24 hours across the country, bringing the total number of doses received to 425,628.

“There is a possibility that some of those who received the vaccines may be infected, but their infections will be mild and will not require hospitalization,” al-Badr concluded.

Lebanese caretaker Health Minister Hamad Hassan said on Friday that his ministry is studying the potential of vaccinating 200,000 people weekly in June as the country expects to receive a big number of vaccines by next month.

Only 3.9 percent of the Lebanese population have so far received two shots of the COVID-19 vaccine due to the lack of vaccines and high rate of vaccine hesitancy.

New Zealand recorded three new cases of COVID-19 on Saturday, said the Ministry of Health in a statement.

According to the ministry, the three new cases of COVID-19 were recent returnees in managed isolation facilities, while there was no new case of COVID-19 in the wider New Zealand community.

The total number of confirmed cases of COVID-19  in the country reached 2,284.

Quarantine Free Travel from New South Wales, Australia to New Zealand was paused from Thursday night as a precautionary measure as investigations continue as a response to two positive cases of COVID-19 in the community in Sydney, Australia.

Trans-Tasman quarantine-free travel bubble between New Zealand and Australia was launched from April 19.