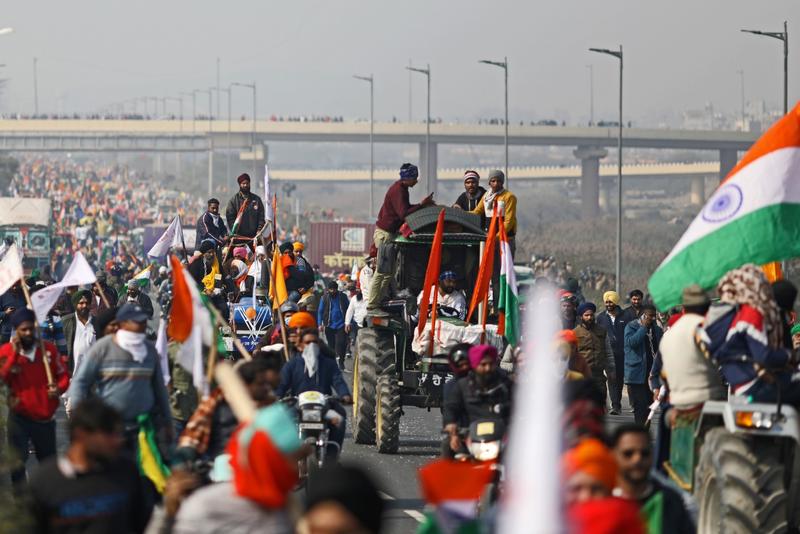 A tractor rally in support of the protests in New Delhi on Jan 26 turned violent when farmers and their supporters clashed with police and stormed city landmarks. The government has responded by increasing the police and paramilitary presence in the capital. (ANINDITO MUKHERJEE / BLOOMBERG)

Hundreds of thousands of farmers are swelling protests along arterial roads into the capital and other cities across India. The police and paramilitary forces have deployed up to 50,000 personnel, as well as barricades, barbed wire and riot-control vehicles. The United Nations is urging restraint. And each day, more farmers and tractors arrive to join the disgruntled ranks.

The farmers are demanding that Prime Minister Narendra Modi repeal laws passed in September that they say will ruin their livelihoods. The government insists the new policy will benefit the growers and refuses to withdraw the legislation. After months of protests, more than 10 rounds of talks and a Supreme Court order to temporarily suspend the laws, the government says it would consider some amendments and could delay implementation by as much as 18 months. But the farmers are in no mood for compromise.

The farmers are demanding that Prime Minister Narendra Modi repeal laws passed in September that they say will ruin their livelihoods. The government insists the new policy will benefit the growers and refuses to withdraw the legislation

“We’re not going anywhere. We are ready to sit here for years if needed. The government has to listen,” said Balwinder Singh, 50, who normally grows rice and wheat on three acres of land in Punjab. He has been protesting since Nov 26 on the Singhu border, the epicentre of the demonstrations outside Delhi. “We can survive the coronavirus but not these laws.”

Behind the protesters’ fears and the government rhetoric is a reality that the country somehow needs to reshape its agricultural system or face the environmental consequences of overproduction and a fiscal calamity from ballooning farm subsidies.

Get the reform right and it could raise millions of agriculture-dependent families out of poverty and propel India to the forefront of global food exports. Get it wrong and it could force tens of millions of people off their land and degrade up to 90 percent of the nation’s water supply.

It’s a problem so titanic that consecutive governments have shied away from making meaningful changes. The government’s willingness to compromise on the farm issue shows that this is potentially an even more delicate path—one that risks alienating more than half of the nation’s 1.3 billion people, who rely on agriculture for a living.

The two sides are poles apart. The government says the laws will overhaul the way farm goods are produced and sold in the country, opening up a decades-old system of state-run wholesale markets to more private purchases and helping producers earn more. The farmers fear the laws would give companies and large wholesalers the power to dictate prices to small land-holders, who make up the majority of producers.

“It’s about unlocking productivity in areas like farming of cereals by applying high-quality farm inputs such as seeds, and using less water to grow the same amount of grain,” said Rahul Bajoria, Mumbai-based chief India economist at Barclays Plc.  “The best way for the farm sector to grow is to focus more on exports, for which the country needs to improve productivity and quality control.” 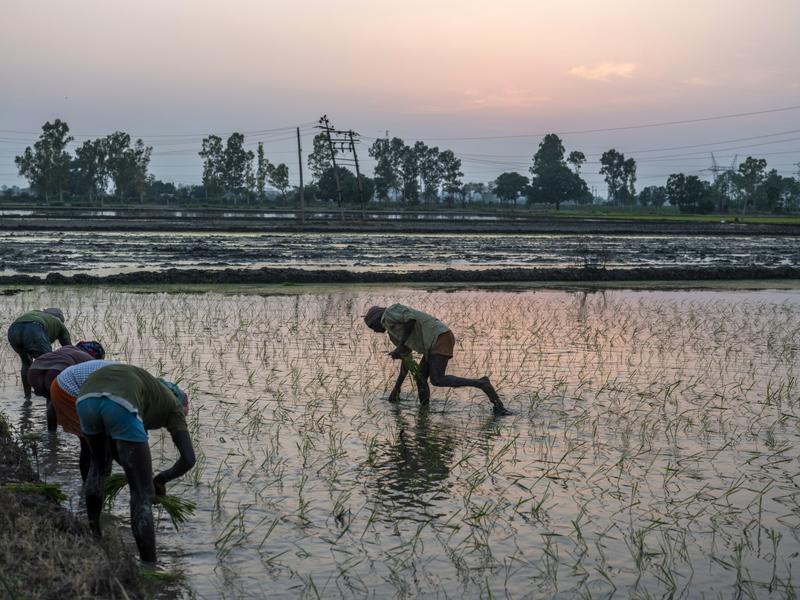 Farmhands sow rice saplings at a flooded field in Haryana in June. Government support for the crop helped turn India into the world’s biggest rice exporter, despite the water-intensive demands of the grain. Photographer: (PRASHANTH  VISHWANATHAN / BLOOMBERG)

But the nation’s millions of small farmers live a precarious existence and have come to trust a government support system that allows them to survive year to year with enough to get to the next harvest.

“Private companies won’t pay us on time,” said Singh, the protester. “If we don’t get paid on time, how will we prepare for our next crop? We will die of hunger.”

The root of the conflict lies in a system that evolved over more than half a century after the Green Revolution of the 1960s slowly transformed the nation from a land of frequent famines to an agricultural powerhouse. India is now the world’s biggest exporter of rice and the second-largest producer of wheat and sugar. At the same time, a complex and inefficient system of state support, controlled markets and government welfare grew up that Modi is trying to unpick.

Under the present system, the government sets minimum prices for about two dozen crops and buys large volumes of rice and wheat for its welfare programs. While traders aren’t legally obliged to pay the government-set rates, the sheer volume of state purchases creates de facto price support for key grains from small farmers, who sell their produce through licensed traders in designated markets.

These markets were set up to open up the industry and prevent exploitation of smallholders, but over time many became effective monopolies, with traders pulling together to stifle competition. As a result, prices of rice and wheat have remained stable over years, while other crops such as soybeans, corn and rapeseed have seen sharp price swings.

Farmers like the arrangement because the government provides them with a guaranteed buyer, allowing them to easily secure informal short-term loans to buy farm inputs like seeds in a country where rural banking services are often inadequate.

The new rules intend to liberalize trading by allowing farmers to sell crops outside the designated markets. Modi’s administration has promised that the welfare support mechanism will remain, but protesters aren’t convinced. 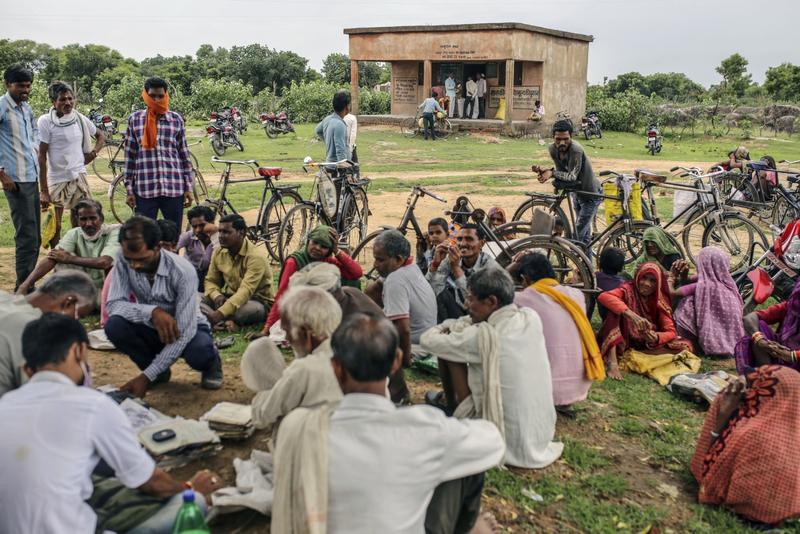 People wait to collect grain rations from a state-run distribution store in a village in Madhya Pradesh in August 2020. The impact of the coronavirus could swell the ranks of those relying on the government’s massive food welfare program. (DHIRAJ SINGH / BLOOMBERG)

Many believe the reforms are designed ultimately to cut the government’s food subsidy bill—expected to be US$33.4 billion in 2021-22—by allowing market forces to drive down prices. The current support rates reflect the cost of production plus a 50 percent profit, which, along with assured purchases, has encouraged farmers to overproduce some crops. With India growing more wheat, rice, sugar cane and cotton than it needs, a free-for-all could cause prices to slump.

Worse still, 86 percent of India’s farmers cultivate plots of about 2 hectares (5 acres) or less, while the other 14 percent own more than half the cultivated land. In an unfettered market, large landowners with lower costs per acre and better access to funds could end up dominating markets, forcing smallholders to sell their land. That’s a shift that took decades in many developed nations as rural residents migrated to cities to work in factories. But an accelerated transition on the scale of India’s population risks a major humanitarian crisis.

Jokhu Ray, who grew corn and rice in the eastern state of Bihar, has had a taste of what a free market could mean. Bihar abolished its government-managed market in 2006 and Ray says the result was disastrous for him. In the 2019-20 crop year, he could only get 10 rupees (14 cents) a kilogram for his corn, less than the support price of 17.6 rupees or the 15 rupees he got the year before. Like many others, Ray left his village to seek work elsewhere and now works on a construction site in Rajasthan.

Stories like Ray’s have fueled farmers’ fears. Protesters around the country held 3-hour “chakka jams” at the weekend, holding up traffic. The government blocked the internet at major protest sites and deployed some 50,000 police and paramilitary, along with riot control vehicles in and around Delhi, according to local media. After violence broke out at a National Day rally in the capital in January, the United Nations urged farmers to keep protests peaceful.

“The government has shut down the Internet here out of fear,” said Singh, by phone. “We are not scared. We are informing people through phone calls.”

“We are urging those involved in agitation to end protests,” Modi told lawmakers in parliament on Feb 8. “We should give these agriculture reforms a chance.”

Farmers instead are demanding new legislation that makes it illegal to pay less than the minimum support rate, a policy analysts say would distort the market even more. Private buyers could be scared off, forcing the government to have to step in and buy even more. That would worsen a fiscal deficit that is already expected to widen to 9.5 percent of GDP due to the coronavirus.

State-run Food Corp of India, the nation’s biggest food-grain buyer, is already stretched after buying 39 million tons of wheat and 52 million tons of rice from last year’s crop of about 108 million tons and 118 million tons respectively. Recent bumper harvests have filled many state granaries to bursting.

Raising minimum prices each year could also hit exports, said BV Krishna Rao, president of the nation’s Rice Exporters Association. “The moment we make minimum prices a legal obligation, we are bound to lose our share in the global market.” He suggested that support prices should be set close to global levels and farmers compensated if needed for any losses.

And there are other, even more serious long-term consequences if India doesn’t find an equitable way to reform its agriculture, especially in states like Punjab and Haryana, where the protests began.

India’s Green Revolution in the 1960s brought a surge in grain output in Punjab thanks to high-yielding seeds, mechanization and increased application of pesticides and fertilizers. Known as India’s bread-basket, the state supplied about one third of the 62 million tons of water-intensive paddy that the government purchased from monsoon-sown crops so far this year, according to the food ministry.

“States like Punjab grow more rice than they consume despite unfavorable terrain, which has resulted in a drastic depletion of their water tables,” Rini Sen, an economist with ANZ Banking Group, said in a report.

India has only about 4 percent of the world’s fresh water and farmers tap almost 90 percent of the groundwater available. Growers say they can’t afford to switch from water-intensive crops such as rice and sugar cane unless the government ensures the same kind of price support for more sustainable crops like soybeans, mustard or pigeon peas (used to make dal).

Finding a compromise that would reassure farmers they can still make a decent living while dismantling an archaic and inefficient agriculture market may be Modi’s hardest task to date. But as the two sides dig in for what could be a long and bitter stand-off, it’s one that India must solve.