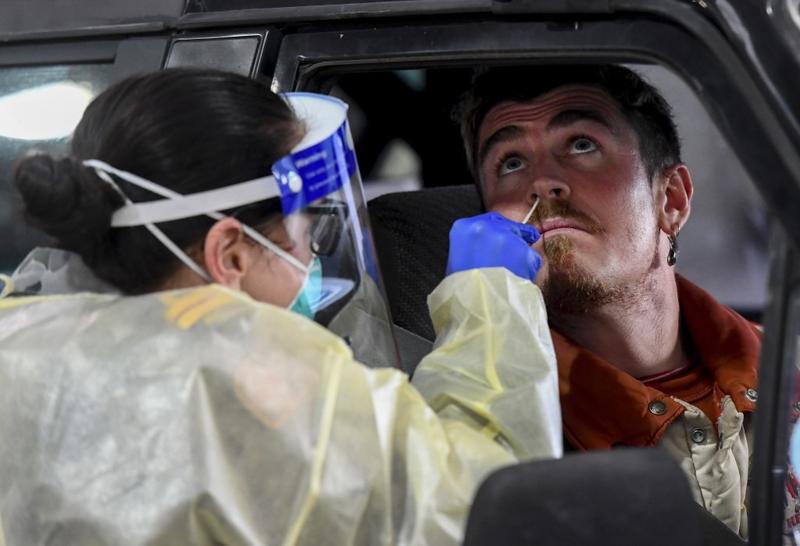 A member of the Australian Defence Force (left) takes a swab sample from a resident in Melbourne on June 27, 2020. (WILLIAM WEST / AFP)

The Southeast Asian nation also recorded 51 more deaths on Monday, raising the death toll to 2,805, the highest in East Asia outside China.

According to him, 864 more patients were discharged from hospitals, bringing the total number of recoveries to 23,800.

President Joko Widodo has told his cabinet he is ready to reshuffle ministers or even disband government agencies that he feels have not done enough to fight the coronavirus outbreak, according to his office.

Widodo made the remarks in a cabinet meeting on June 18, the video of which was released by his office on Sunday. The president also complained to his ministers of slow government spending in the face of a dire global economic outlook.

Afghanistan on Monday reported 271 new COVID-19 cases in the past 24 hours, bringing the country’s tally to 31,238, the Ministry of Public Health confirmed.

Twelve more deaths were registered, raising the death toll to 733.

Australia’s second most populous state said on Monday it was considering reimposing social distancing restrictions after the country reported its biggest one-day rise in new coronavirus infections in more than two months.

Victoria has recorded 75 more cases in the past 24 hours, health authorities announced, making it Australia’s biggest daily outbreak since April 11. The surge in cases in Melbourne, the capital of Victoria, has been centered around suburbs in the city’s northern and western fringes. The state is hoping a new saliva test, which is less intrusive, will encourage more people to get tested – even though it is slightly less accurate.

Australian authorities have denied that the nation is in the midst of a “second wave” of COVID-19 despite an outbreak in Victoria. The Australian government’s Chief Nursing and Midwifery Officer Alison McMillan said the spike in cases was “a community outbreak in one part of the city”.

Morrison has called on states to continue easing restrictions, insisting the country’s economy can not remained idled. He ruled out a blanket extension of a A$60 billion (US$41.1 billion) wage subsidy scheme beyond its scheduled end in September.

Australia has so far reported around 7,800, including 104 deaths.

Bangladesh reported more than 4,000 new COVID-19 cases on Monday, bringing the tally in the country to nearly 142,000.

“The number of confirmed infections in the country totaled 141,801 while fatalities stood at 1,783,” she said.

India’s federal health ministry said Monday morning that 380 more COVID-19 deaths and 19,459 new cases were reported across the country, taking the death toll to 16,475 and the number of confirmed cases to 548,318.

According to officials, 321,723 patients have so far been discharged from hospitals after showing improvement. The number of active cases in the country right stood at 210,120, according to the health ministry.

Mumbai police on Sunday urged people to restrict their outdoor travel for essential activities within a 2-km radius of their homes to curb the COVID-19 spread as the lockdown in the city was further extended beyond June 30. Mumbai is the worst affected city in India with over 28,000 active cases and 4,284 deaths.

Earlier in the day, India’s western state of Maharashtra, which has Mumbai as its political capital, extended its three-month lockdown that was due to end on June 30. 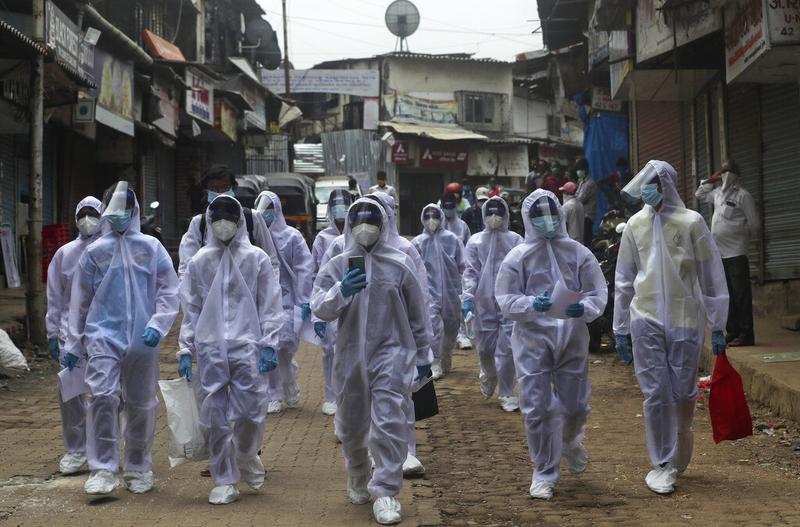 Amid increasing infections and fatalities from COVID-19 after the partial lifting of the lockdown, Iranian President Hassan Rouhani on Sunday said that wearing face masks in public areas will become mandatory from next week.

“From July 5, wearing masks in all public areas will be compulsory for two weeks,” Rouhani said at a meeting of the National Headquarters for Managing and Fighting the Coronavirus.

If necessary, the new decision will remain in force for the next month, he was quoted as saying by official IRNA news agency.

The number of coronavirus active cases in Israel has risen to 6,363, the highest since May 2, the state’s Ministry of Health said on Sunday.

The death toll rose from 317 to 318 while the number of patients in serious condition fell from 41 to 39.

The increase matched Sunday’s tally, which was the highest since the state of emergency was lifted in May.

Deputy Health Minister Nurbolot Usenbaev said that among the new cases, nine were imported while the remaining 260 are contacts of earlier confirmed cases.

The number of recoveries rose by 52 to 2,294 while the death toll increased by three to 50.

Kuwait on Sunday reported 551 new COVID-19 cases and four more deaths, raising the tally of infections to 44,942 and the death toll to 348, the Health Ministry said in a statement.

The ministry also announced that 908 more patients have recovered, raising the total number of recoveries in the country to 35,494.

Laos has conducted COVID-19 test on 14,907 cases since January, with 19 of them positive, according to a Ministry of Health report on Monday.

All of the 19 confirmed cases have been discharged from hospitals.

On Sunday, a total of 1,665 people entered Laos through international border checkpoint. The temperature of each person entering Laos was checked and no one showed signs of fever.

The National Taskforce Committee for COVID-19 Prevention and Control announced it has been monitoring 3,295 people at 89 accommodation centers across the country.

Lebanon’s tally of COVID-19 cases on Sunday increased by 21 cases to 1,740, the National News Agency reported.

The death toll went up by one to 34, the news agency said.

All the 220 cases were imported, mostly from Russia, according to the NCCD. Among them, 175 patients have recovered so far.

New Zealand reported on Monday two new COVID-19 cases, who have recently returned from overseas, bringing the total number of active cases in the country to 22, according to the country’s Ministry of Health.

Both of the new cases are now in quarantine in Auckland, according a ministry statement.

The addition of the new cases pushed the country’s tally to 1,178, with 22 deaths.

Prime Minister Jacinda Ardern said more work needed to be done for an agreement on a trans-Tasman bubble for safe travel to Australia. She said in a news conference the cabinet will not move to open the border with Australia until it has reassurances that New Zealanders will be safe. More broadly, she said it is untenable to be opening up the border to COVID-19.

Palestine on Sunday announced that 195 new coronavirus cases were confirmed, raising the country’s tally to 2,248.

According to Health Minister Mai al-Kaila, 621 patients have recovered and seven have died.

Hebron, the hardest-hit district in the West Bank, has registered nearly 60 percent of all the cases, al-Kaila said, warning of hundreds of uncovered cases in the district. The Health Ministry said special measures will be taken in the district, including redirecting non-urgent medical cases and surgeries, suspending outpatient clinics at hospitals and dedicating them to handle the outbreak of the novel coronavirus patients in the area.

The number of COVID-19 cases in the Philippines soared to 36,438 after the Department of Health (DOH) reported 985 new cases on Monday.

The DOH said in its bulletin that the number of recoveries further rose to 9,956 after 270 more patients recovered.

The death toll increased to 1,255 after 11 more deaths were registered, the DOH added.

Qatar aims to further ease coronavirus curbs from July 1, allowing the limited reopening of restaurants, beaches and parks, as infections have passed their peak and the rate was subsiding, authorities said.

The nation of about 2.8 million people has the second highest tally of infections among the six Gulf Arab states, after much larger neighbour Saudi Arabia. It announced 750 new cases on Sunday, taking its total to 94,413, with 110 deaths.

In a statement late on Sunday, the Supreme Committee for Crisis Management said restaurants would reopen at limited capacity from July 1, as would public beaches and parks. Public and private gatherings of a maximum of five people will be allowed, while employees in the public and private sector can work from office at 50 percent capacity, it added.

In a third phase of relaxation, scheduled from Aug 1, it will permit flights from low-risk countries to resume, and reopen shopping malls and markets.

Saudi Arabia’s tally of coronavirus cases rose on Sunday to 182,493 after 3,989 new infections were reported.

The death toll increased by 40 to 1,551, the health ministry tweeted.

Singapore’s Ministry of Health reported 213 new COVID-19 cases on Sunday, bringing the total number of confirmed cases in the country to 43,459.

Out of the new cases, 93 percent are linked to known clusters while the rest are pending contact tracing.

In all, 37,508 people have fully recovered from the infection and have been discharged from hospitals or community care facilities, the ministry said.

The country has reported 26 deaths from COVID-19 so far. 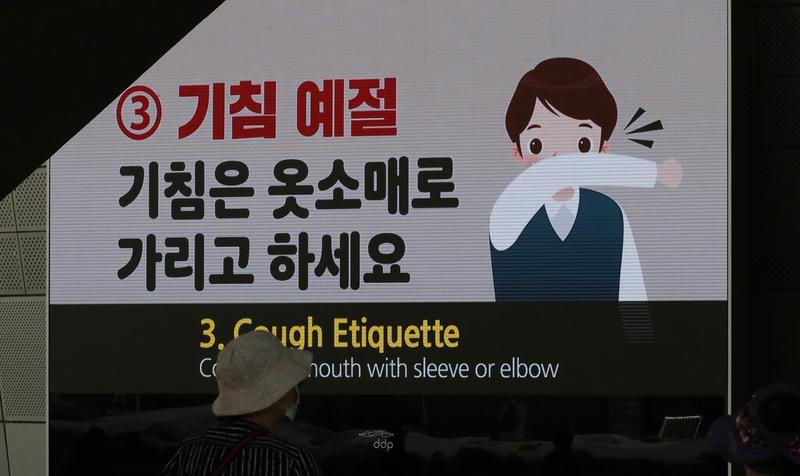 A visitor wearing a face mask walks near a screen displaying precautions against the coronavirus in Seoul, South Korea, June 28, 2020. (LEE JIN-MAN / AP)

South Korea’s health authorities called on Monday for citizens to stagger vacation schedules ahead of the holiday season and avoid gatherings at workplaces and religious facilities, as coronavirus infections from small clusters persist.

President Moon Jae-in expressed concerns about the persistent infections ahead of the summer holiday season, calling for strict steps to prevent the virus. He urged people to stagger breaks and avoid crowded attractions.

The Korea Centers for Disease Control and Prevention Director Jeong Eun-kyeong warned against small religious gatherings. He noted that about 1,600 members of a Christian church in southern Seoul are undergoing a check after one attendee was confirmed to have contracted the virus, and 28 of them have tested positive so far.

More than 1,200 people have been placed under a 14-day quarantine in Sri Lanka for failing to wear face masks amid the COVID-19 pandemic, which has sickened more than 2,000 people to date in the country, the police said on Monday.

Police said 1,217 people were arrested from the Western province for failing to wear masks in public places over the weekend.

On Sunday, President Gotabaya Rajapaksa’s office announced that a night curfew was lifted completely as the outbreak has been contained. 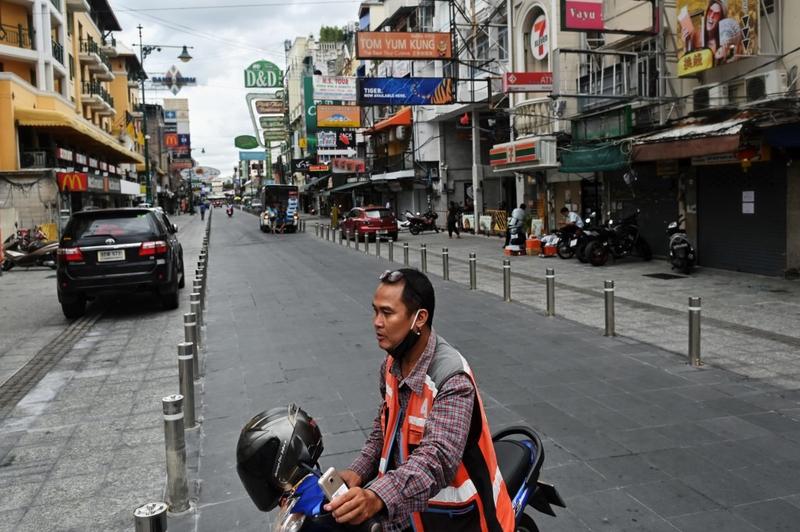 A motorcycle taxi driver waits for customers at Khao San Road, empty of tourists due to restrictions on the entry by foreigners into Thailand due to COVID-19, in Bangkok, Thailand, on June 16, 2020. (LILLIAN SUWANRUMPHA / AFP)

Thailand will allow all schools, nightclubs and bars to reopen in the country’s fifth stage of reopening, Taweesilp Witsanuyotin, a spokesman for the COVID-19 center, said at a briefing. The nightclubs and bars will be subject to restrictions on the numbers of patrons and closing hours.

Meanwhile, foreigners with work permits, residency and families in Thailand will be able to enter the country, but will be subject to a 14-day quarantine. Taweesin said foreigners seeking certain types of medical treatment such as some cosmetic surgery or fertility treatment could also be allowed into the country.

Business visitors from Japan, South Korea, Singapore, the Chinese mainland and the Hong Kong Special Administrative Region could also be exempted from a two-week quarantine period under a fast track entry if they have certificates to show they were free from COVID-19 and were tested upon arrival.

Thailand plans to extend its state of emergency to manage risks as the country prepares for the latest reopening, Prime Minister Prayuth Chan-Ocha said on Monday.

The country on Monday reported seven new cases, all of which were imported, marking 35 days without community transmission. So far, the country has reported 3,169 confirmed cases, with 58 deaths and 3,053 recoveries.

Turkey’s confirmed COVID-19 cases increased by 1,356 in the past 24 hours, bringing the total number of confirmed cases to 197,239, Health Minister Fahrettin Koca said on Sunday.

Koca tweeted that 15 more people have died, raising the death toll to 5,097.

The total number of confirmed cases stood at 355, with zero deaths reported so far.

Meanwhile, as many as 330 patients in the country have recovered from the disease, said the ministry.