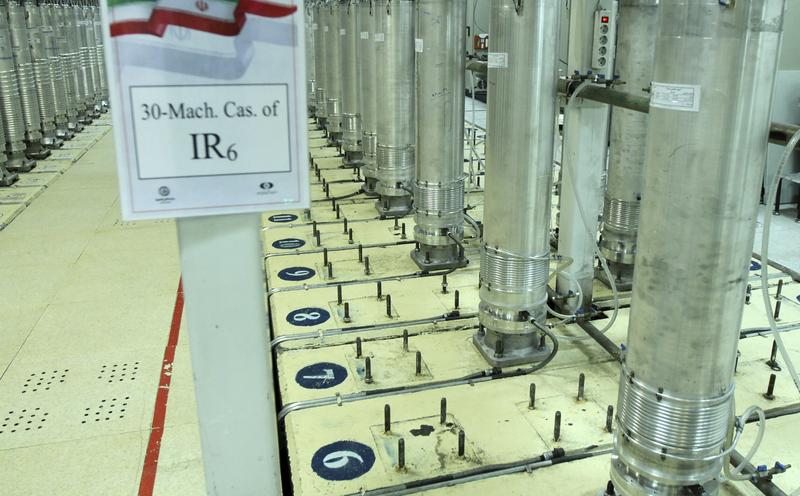 This file photo released Nov 5, 2019, by the Atomic Energy Organization of Iran (AEOI), shows centrifuge machines in the Natanz uranium enrichment facility in central Iran. The facility lost power on April 11, 2021, just hours after starting up new advanced centrifuges capable of enriching uranium faster, the latest incident to strike the site amid negotiations over the tattered atomic accord with world powers. Iran on Sunday described the blackout an act of “nuclear terrorism,” raising regional tensions. (ATOMIC ENERGY ORGANIZATION OF IRAN VIA AP, FILE)

DUBAI – Iran on Monday accused arch-foe Israel of sabotaging its key Natanz nuclear site and vowed revenge for an attack that appeared to be latest episode in a long-running covert war.

Iran’s semi-official Nournews website said the person who caused an electricity outage in one of the production halls at the underground uranium enrichment plant had been identified. “Necessary measures are being taken to arrest this person,” the website reported, without giving details about the person.

The incident occurred amid diplomatic efforts by Iran and the United States to revive Tehran’s 2015 nuclear deal with major powers, an accord Israel fiercely opposed, after former US president Donald Trump abandoned it three years ago.

Iran’s semi-official Nournews website said the person who caused an electricity outage in one of the production halls at the underground uranium enrichment plant at Natanz had been identified. “Necessary measures are being taken to arrest this person,” the website reported, without giving details about the person

Last week, Iran and the global powers held what they described as “constructive” talks to salvage the deal, which has unravelled as Iran has breached its limits on sensitive uranium enrichment since Trump reimposed harsh sanctions on Tehran.

Iranian authorities described the incident a day earlier as an act of “nuclear terrorism” and said Tehran reserved the right to take action against the perpetrators.

“The Zionists want to take revenge because of our progress in the way to lift sanctions… We will not fall into their trap…We will not allow this act of sabotage to affect the nuclear talks,” Zarif was quoted by state TV as saying.

“But we will take our revenge against the Zionists.”

Multiple Israeli media outlets have quoted unnamed intelligence sources as saying the country’s Mossad spy service carried out a successful sabotage operation at the underground Natanz complex, potentially setting back enrichment work there by months. Israel has not formally commented on the incident.

“Iran’s response will be revenge against the Zionist regime in its place and time,” Foreign Ministry spokesman Saeed Khatibzadeh told a news conference on Monday.

Iranian nuclear energy chief Ali Akbar Salehi said an emergency power system had been activated at Natanz to offset the outage. “Enrichment of uranium has not stopped in the site.”

The incident took place a day after Tehran, which has insisted it wants only peaceful nuclear energy not nuclear weapons, started new advanced enrichment centrifuges at Natanz.

Khatibzadeh said that the incident could be deemed an “act against humanity”, adding it had caused “no contamination or casualties” at the site.

“Our nuclear experts are assessing the damage but I can assure you that Iran will replace damaged uranium enrichment centrifuges in Natanz with advanced ones,” Khatibzadeh said.

“All of the centrifuges that went out of circuit at Natanz site were of the IR1 type,” he said, referring to Iran’s first generation of enrichment machines more vulnerable to outages.

The incident also coincided with a visit to Israel by US Secretary of Defense Lloyd Austin, who pledged the Biden administration’s support for its Middle East ally.

“I’m committed to continuing our close consultations on threats posed by Iran and to strengthening Israel’s security,” Austin tweeted late on Sunday.

At the same time, despite strong Israeli opposition, President Joe Biden’s administration is committed to rejoining the 2015 nuclear deal if Iran returns to full compliance with restrictions on uranium enrichment.

The US State Department said on Friday it expects working group negotiations to resume next week, with delegations returning to their capitals currently for consultations.

There has been headway in the nuclear diplomacy, delegates said on Friday, but Iranian officials cited disagreement with Washington over which sanctions it must lift for a new deal.

A senior Biden administration official said Washington had no involvement in the Natanz incident. “We have nothing to add to speculation about the causes,” the official said.

At a ceremony on Sunday, Israeli Prime Minister Benjamin Netanyahu made no direct reference to Natanz, though said: “The fight against Iran’s nuclearisation…is a massive task.”

There have been sporadic episodes of sabotage and outages at Iranian nuclear installations for over a decade, for which Tehran has blamed Israel, which regards the Iranian nuclear programme as a menace to its existence.

In 2010, the Stuxnet computer virus, widely believed to have been developed by the United States and Israel, was discovered after it was used to attack Natanz, causing damaging breakdowns of centrifuge cascades that refine uranium.

In July last year, a fire broke out at Natanz that Iran said was an attempt to sabotage its enrichment activity.

Iran also accused Israel of responsibility for last November’s ambush killing outside Tehran of Mohsen Fakhrizadeh, who was regarded by Western intelligence services as the mastermind of a covert Iranian nuclear weapons programme. Israel has neither confirmed nor denied involvement.