A sign asking customers to wear a face mask is displayed in a shop window in the affluent Garuso-gil shopping street in Seoul on Sept 15, 2020. (PHOTO / AFP)

Officials have been struggling to contain the Middle East’s worst outbreak of the disease as they also try to parry the pathogen’s impact on an economy already hobbled by a tough US sanctions regime.

Deaths from the coronavirus rose by 178 overnight, bringing total fatalities to 24,656, Sima Sadat Lari, spokeswoman for the Health Ministry said in a statement on state TV, adding that total cases have now reached 429,193.

South Korea suspended free flu shots on Tuesday after reports of problems in storing the vaccinations during transportation, disrupting plans to pre-emptively ease the burden on a healthcare system already strained by coronavirus outbreaks.

The country, which has seen a spike in COVID-19 cases since August, planned to procure 20% more flu vaccines for the winter than the previous year to jab 30 million people. It had planned to start free inoculation on Tuesday for some 19 million eligible people.

The head of South Korea’s disease prevention agency said on Tuesday that some doses of the vaccine, which need to be refrigerated, had been exposed to room temperature while being transported to a medical facility.

South Korea reported 61 new coronavirus cases on Tuesday, the third straight day that the increase has been below 100.

The total number of confirmed cases in the country has now reached 23,106 while the death toll rose by three to 388, account to data from Korea Disease Control and Prevention Agency. 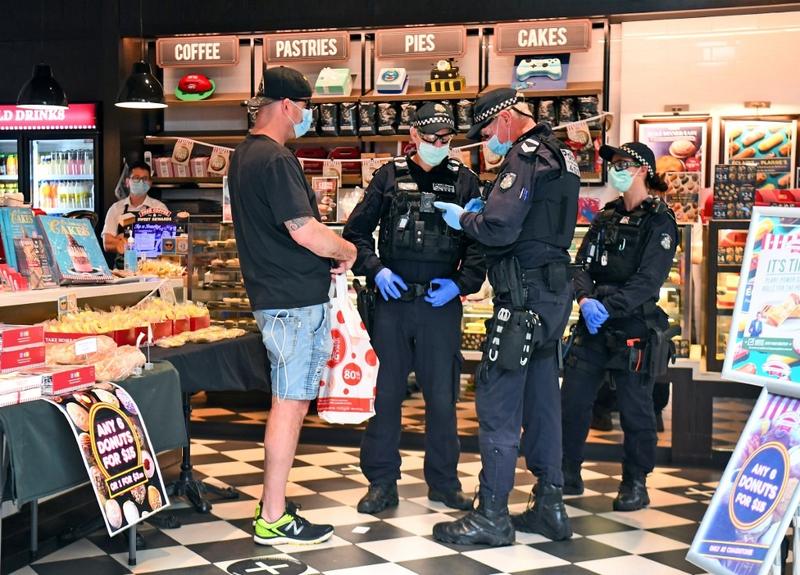 Police question a man after an anti-lockdown protest at a shopping centre in the Melbourne suburb of Chadstone on September 20, 2020. Melbourne continues to enforce strict lockdown measures to battle a second wave of the coronavirus. (WILLIAM WEST / AFP)

Australia’s virus hotspot of Victoria on Tuesday reported a more than doubling in new COVID-19 infections likely as a result of increased testing, while states elsewhere in the country said border restrictions would be relaxed as case numbers dwindled.

The new infections are more than double the 11 reported on Monday as the state moves toward easing restrictions in the capital of Melbourne.

Melbourne residents have been living under one of the world’s strictest lockdowns — which includes a nightly curfew — for more than two months. From Sept. 28, curbs on the city are due to ease slightly to allow childcare to reopen and some limited socializing.

That’s provided the daily average new case rate doesn’t exceed 50 over the previous 14 days. That average was 32.8 on Tuesday, the Department of Health and Human Services said.

Officials said the northeastern state of Queensland would open its borders to parts of neighboring New South Wales.

NSW has maintained new daily infections in the single-digits since Sept 11, reporting only two cases in the past 24 hours, both of which were overseas travelers already in quarantine.

The latest numbers are down from more than 86,000 on Monday and new infections above 90,000 the previous four days, according to data compiled by Bloomberg. The nation’s case tally is has now reached 5.56 million while the coronavirus-related death toll is 88,935, according to government data.

India may have a vaccine for the coronavirus ready by early 2021 but rolling it out safely across 1.3 billion people will be the country’s biggest challenge in fighting its epidemic, according to a leading scientist.

“By year-end we will have data that will tell us which vaccines are working and which ones are not going to do so well,” Gagandeep Kang, professor of microbiology at the Vellore-based Christian Medical College and a member of the WHO’s Global Advisory Committee on Vaccine Safety, told Bloomberg. “If we get good results by year-end then we are looking at vaccines being potentially available in tiny numbers in first half of 2021 and larger numbers in the latter part.”

The death toll from the coronavirus in Iraq rose to 8,625 after 70 fatalities were added. 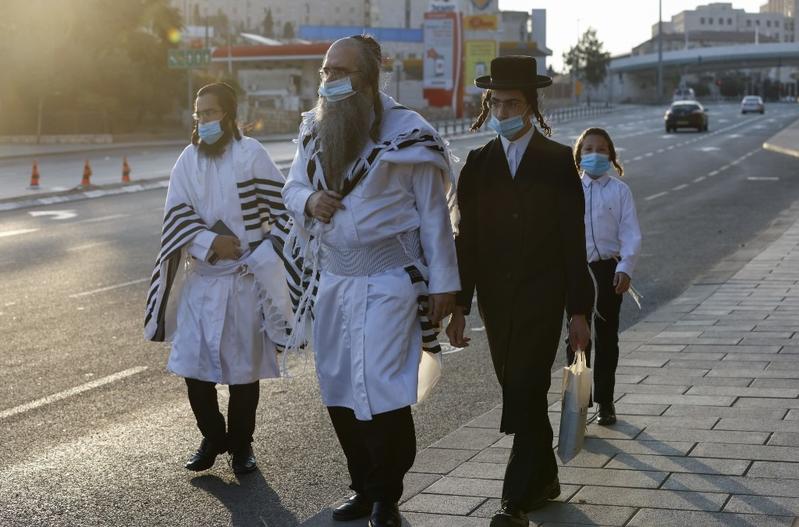 Ultra-Orthodox Jews wearing protective masks due to the COVID-19 pandemic, walk on an empty street on their way to the synagogue for the Jewish New Year prayers in Jerusalem, on Sept 19, 2020, amid lockdown due to a spike in infection cases. (MENAHEM KAHANA / AFP)

It is worth noting that the active cases in the country reached a record high of 52,876.

The Israeli Ministry of Health declared a state of emergency in all hospitals on Monday after the recent abnormal rise in COVID-19 morbidity and overload of the wards.

In the mean time, Israeli Defense Minister Benny Gantz ordered military preparations for the opening of a field hospital after two hospitals announced their inability to admit more COVID-19 patients.

Despite no immediate need to open a field hospital, “We are preparing for extreme scenarios,” said Gantz, also Israel’s alternate prime minister.

According to Channel 12 TV news, the new hospital will have 200 beds and be equipped with military doctors, nurses and paramedics and about 600 soldiers.

Meanwhile, a nationwide survey found that less than 4 percent of its population has developed antibodies against COVID-19.

The survey suggests about 318,000 people across the country had contracted the coronavirus by late August, about triple the official number of confirmed cases at the time, according to a Health Ministry presentation seen by Bloomberg. The survey, dated Aug 23, was conducted on a sample of 51,000 people deemed to represent the country’s 9.2 million inhabitants.

The findings won’t influence the way the government is managing the pandemic since very little of the population appears to have been exposed to the virus, said a senior health official who spoke on condition of anonymity. Israel’s Health Ministry didn’t respond to a request for comment.

Malaysian Prime Minister Muhyiddin Yassin has called for the world to ensure that once a COVID-19 vaccine is available, it should be available to all nations.

The COVID-19 deaths touched the 100-mark in Myanmar with two new deaths, according to a release from the Health and Sports Ministry on Tuesday.

The release said 320 more infection cases were also reported on Tuesday morning, bringing the total number of cases in the country to 6,471.

According to the latest figures, a total of 224,383 samples have been tested for COVID-19 at the country’s laboratory so far.

Oman’s Ministry of Health announced 576 new cases of infections, raising the total number of coronavirus cases in the country to 94,051, including 853 deaths and 85,781 recoveries.

“Since the outbreak of the disease in the Palestinian territories in March, the health ministry has recorded 46,057 cases, including 309 deaths and 32,460 recovered cases. There are 13,288 active cases receiving medical care,” al-Kaila added.

The death toll from the coronavirus in the country rose to 7,574 after 68 new fatalities were added in the past 24 hours, Koca said, adding that the total recoveries increased to 268,435. 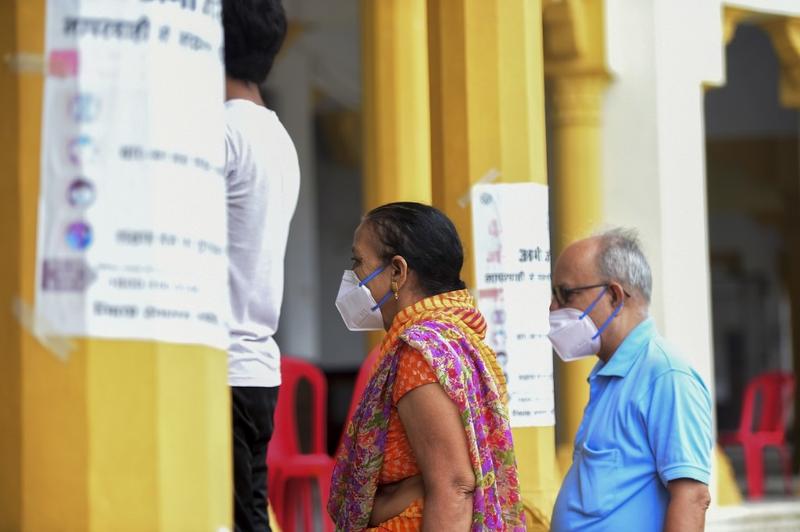 People wait to get tested for the COVID-19 Coronavirus at a testing point in Allahabad on Sept 21, 2020. (SANJAY KANOJIA / AFP)

The number of confirmed COVID-19 cases in the Philippines surged to 291,789 after the Department of Health (DOH) reported 1,635 new daily cases on Tuesday, the lowest in 15 days.

The tally of recoveries in the UAE rose to 75,086 after 813 more patients have recovered from the virus and the death toll reached 405 with one more death.

Meanwhile, 68 people died in the past 24 hours, taking the death toll to 7,574, according to the data shared by the ministry.