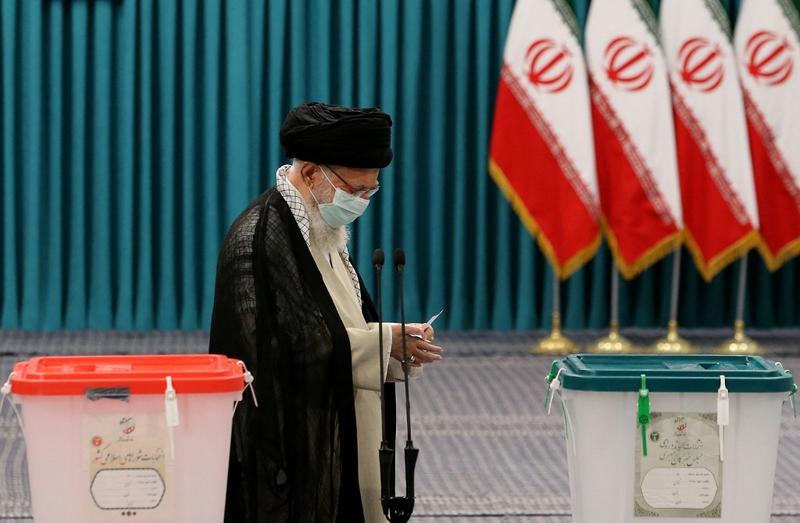 Iranians vote Friday in a presidential election expected to see a hardline conservative replace the more moderate Hassan Rouhani, complicating efforts to restore a landmark nuclear accord that has major implications for Middle East security and oil markets.

Polling stations opened at 7 am local time after a three-week campaign beset by controversy after authorities barred politicians who back greater engagement with the US and Europe and some high-profile conservatives from standing.

The candidates include 60-year-old Ebrahim Raisi, a cleric and judiciary chief who said he supported the nuclear-deal diplomacy but downplayed the accord as a “marginal matter”

The narrow field is expected to depress turnout to a record low and all but ensure the election of 60-year-old Ebrahim Raisi, an austere cleric and judiciary chief who’s also seen as the favorite to one day succeed Supreme Leader Ayatollah Ali Khamenei. In his campaign, Raisi supported the nuclear-deal diplomacy but downplayed the accord as a “marginal matter”.

The cleric was sanctioned in 2019 by the Trump administration, which cited his role in a deadly crackdown a decade earlier on protesters alleging vote fraud.

After casting his vote, Ayatollah Khamenei urged Iranians to turn out in large numbers.

“People’s participation will bring great advantages to the Islamic Republic on the international scene,” he said in a short speech.

The only pro-reform contender is Abdolnaser Hemmati, who stepped aside as governor of the Central Bank of Iran in order to run, but he doesn’t have a major political following and lacks official endorsement from any of Iran’s major reformist parties. Still, if the moderate camp is successful in encouraging more of its supporters to vote, Raisi could be forced into a runoff if he fails to secure 50 percent of ballots.

By mid-morning, some polling stations in central Tehran were empty and others had a few voters. Polls are open until midnight and many people are expected to wait until after work when temperatures cool.

Those who were voting reflected the nation’s deep political divide. “I’m hopeful about Mr. Raisi,” said clothing-store owner Razieh, 47, who declined to give her surname because of the sensitivity of speaking with foreign media. “Hopefully he will adopt a firm stance in negotiations and also toward foreign countries.”

Government employee Reza, 43, had considered shunning the election to protest the exclusion of reformists but eventually voted for Hemmati.

“Look at the fate of the nuclear deal and Iran’s position in the world under Mr. Rouhani who is a moderate president,” he said. “What’s going to happen under Mr. Raisi? You can’t leave such things to ifs and buts.”

Rouhani’s plans to use foreign investment to overhaul the country’s infrastructure and restore its position as a major oil exporter within OPEC were shattered by the unraveling of the nuclear agreement, further dispiriting a middle class that had propelled him to two terms.

Rouhani remains in office until August, giving his negotiators a few more weeks to revive the 2015 agreement with world powers that lifted sanctions on Iran’s economy and curtailed its atomic program until then-President Donald Trump withdrew the US three years later.

Washington’s exit from the nuclear pact empowered ultraconservatives who were always heavily critical of the nuclear accord and won control of parliament last year. The American withdrawal sent tensions soaring in the Persian Gulf, fueling regional conflicts and prompting Tehran to enrich uranium close to the level needed for a bomb.

International Atomic Energy Agency monitors said Iran hasn’t yet offered to extend a temporary monitoring pact set to expire June 24. An Iranian government spokesman said Wednesday that the agreement would only be prolonged if there’s progress this week at the nuclear talks in Vienna.

Failure to revive that accord, which preserves IAEA camera and monitoring data gleaned from nuclear facilities, will result in that information being erased, IAEA Director General Rafael Mariano Grossi said in an interview with Bloomberg Television.

“If this information is erased, quite simply there will be a black hole from February to June in terms of enrichment and other activities in Iran with serious consequences for non-proliferation,” said the Argentine diplomat, adding that Iran retains enough economic power to dramatically expand its nuclear work.

The Biden administration came to office seeking to rejoin the nuclear accord and diplomats representing world powers have been camped in Vienna for weeks in search of a deal. Oil markets are closely watching developments of signs of when expanded Iranian crude exports are likely to resume.

As with previous governments keen to bolster support among a pious, working-class base, Raisi has hinted at a populist agenda, promising to build 1 million affordable homes, increase taxes on the wealthy, and improve cash handouts for the poor.