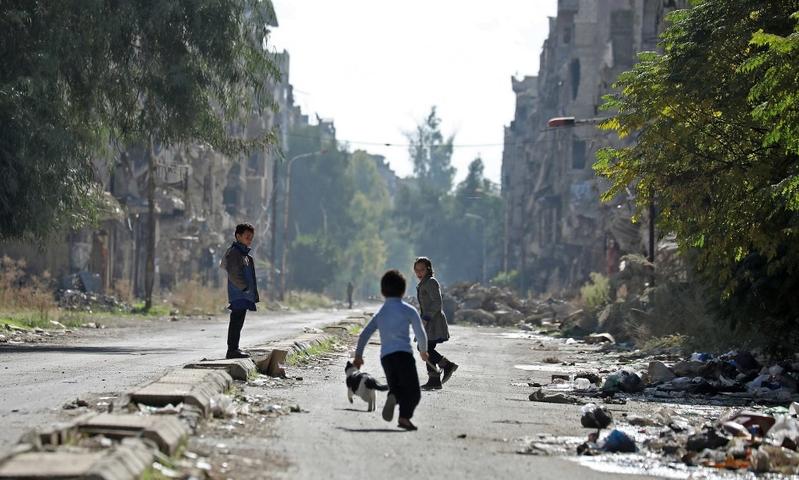 Children play in the rubble-riddled streets of the Palestinian Yarmuk camp, on the southern outskirts of the Syrian capital Damascus, on November 25, 2020. (LOUAI BESHARA / AFP)

DAMASCUS – Israel launched a missile attack on Syrian military sites around the capital Damascus in the early hours of Monday, causing the Syrian air defenses to respond, according to the state news agency SANA.

The new strikes were conducted from over the Israeli-occupied Golan Heights and targeted military targets in the surroundings of Damascus, said SANA, citing a military source, adding that the air defenses intercepted most of the missiles.

No further details were given by SANA about the attack, which was clearly heard in Damascus as the air defense missiles were fired to intercept the Israeli missiles.

The Israeli assault is the latest in a string of attacks targeting military sites in Syria under the pretext of striking Iranian targets in Syria.

The last Israeli attack was carried out on Feb 3, when the Israelis fired surface-to-surface and air-to-surface missiles at targets in southern Syria with no reports about casualties and damage.

On Sunday, Ali Asghar Khaji, senior assistant of Iran’s foreign minister, said Iran’s presence in Syria is at the official request of the Syrian government

He said that “we are there (in Syria) at the request of the Syrian government, and this presence will continue as long as the Syrian people and government want it.”

Those who have came to Syria and have illegally occupied its territories should leave the Arab state, Khaji pointed out.

The Syrian territory should be under the control and sovereignty of the Syrian nation and government, he added.

In July 2020, Iran and Syria signed an agreement to expand “comprehensive” military and security cooperation.

Iran has been a major ally of the Syrian government in its fight against the armed rebels since 2011.