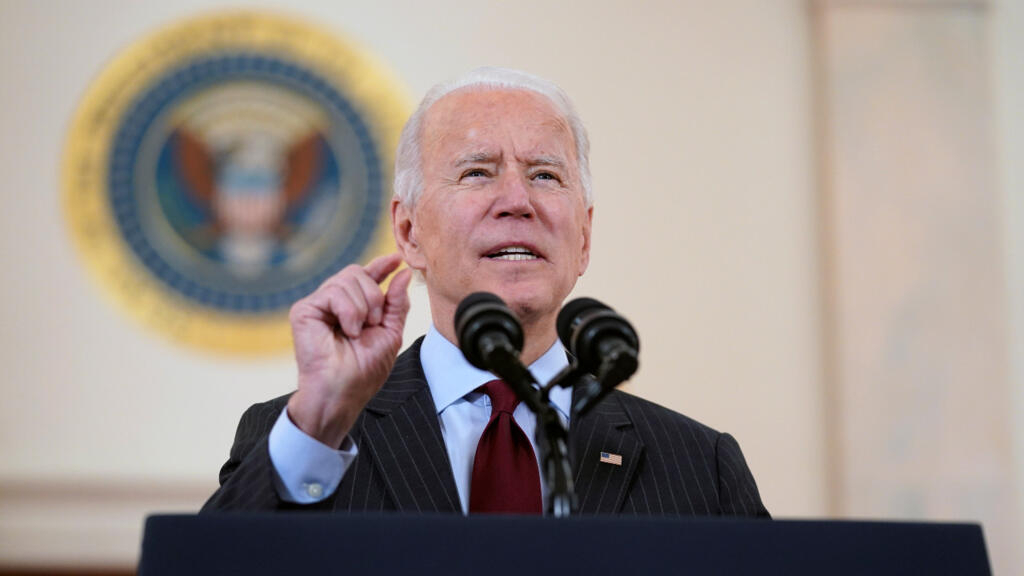 While Joe Biden has signalled his willingness to return to the Iranian nuclear deal, his first military operation as president on Thursday targeted pro-Iranian militias in eastern Syria. The strikes were a response to the recent attacks against US interests in Iraq, and above all a strong signal to Tehran.

US President Joe Biden gave the go-ahead on February 25 for air strikes against facilities in eastern Syria that the Pentagon says were run by Iranian-backed militias. The action was a response to recent rocket attacks against US interests in Iraq.

The Pentagon has been careful to note that the strikes, Biden’s first military action since entering the White House, were defensive and proportionate.

In a sign of Washington’s caution, a US official, speaking on condition of anonymity, told Reuters that these calibrated strikes were intended to punish the militias without causing an escalation of the military situation.

Several options were presented to Biden, who chose the one least likely to ignite the situation, the official said.

Apart from their tactical purpose, the strikes seemed to be, above all, intended to send a strong message to Iran, which has a tradition of testing each new American administration.

“Experts concur in seeing this operation as a message from Joe Biden, who thus lets the Iranians know that he is the new president of the United States, that he is certainly not Donald Trump, but that he is ready to respond to attacks against American interests and to make Iran bear responsibility,” said Reza Sayah, FRANCE 24’s correspondent in Iran.

It remains to be seen whether the militias that were targeted in Syria will respond. The balance of power is not in their favour, as an escalation could impact the current steps of the US administration to revive the Iranian nuclear deal.

So far, Iran has not reacted to the operation. But the United States has let it and its allies in the region know that, despite its willingness to revive the 2015 agreement — designed to prevent the Iranians from acquiring the atomic bomb and abandoned by Donald Trump in 2018 — it will not leave attacks against its interests unchecked.

“The stakes are too high, both for the Islamic Republic and for the United States, for the situation to get out of control to the point of jeopardizing the priority issue of the 2015 agreement,” Sayah said. “In recent weeks, there have been many positive signs around this issue, and it is unlikely that these regional frictions will divert Tehran and Washington from the essential.”

Indeed, the operation in Syria was carried out in the context of a recalibration of American diplomacy in the Middle East after the Trump years, one of the main thrusts of which is Biden’s stated desire to return to the Vienna Agreement.

If the defeat of Trump, a hardliner on Iran, was greeted with relief in Tehran, the Islamic Republic has not reached détente with the Biden administration. This is despite some of the gestures the US has made in the region, such as ending its support for the war in Yemen and the apparent marginalization of the Saudi Crown Prince Mohammed ben Salman.

The United States has also made direct moves in Tehran’s favour, in particular with its February 18 cancellation of the September 2020 unilateral sanctions taken against Iran by the Trump administration. But the initiatives have been seen as insufficient by the Iranian government, which will not pardon Washington for the assassination of the influential General Qassem Soleimani, ordered by Trump, and which, since 2018, has gradually freed itself from the previously accepted limits on its nuclear program.

While the US demands that the Iranians return to full compliance with the commitments they made in 2015, Tehran is raising the stakes and waiting for guarantees from Washington. In particular, it is demanding that the United States “unconditionally lift all sanctions imposed, reimposed or revamped by Trump”, said Iranian Minister of Foreign Affairs Mohammad Javad Zarif.

“There is a mismatch in form and in words under Biden, who has a policy of reaching out to the Iranians but has not yet reversed Donald Trump’s decisions, since the strong sanctions imposed by the Republican billionaire on Iran, which are strangling the country’s economy, are still in place,” Antoine Mariotti, a journalist specializing in the Middle East, said on FRANCE 24.

So far, the United States and Iran have remained stuck in their positions and mired in a power struggle over who will give in first. “That’s the case, even though both sides have an interest in being able to move forward on this issue,” Mariotti added.

Recently interviewed on FRANCE 24, Iran’s ambassador to the UN, Majid Takht-Ravanchi, stated that it is up to Washington, which has withdrawn from the agreement, “to take the first step” and “restore the confidence of the Iranians”.

Time may be running out for Biden. The June presidential election in Iran could see a conservative president succeed Hassan Rohani, one who might be less inclined to negotiate with Washington.

This article has been translated from the original in French