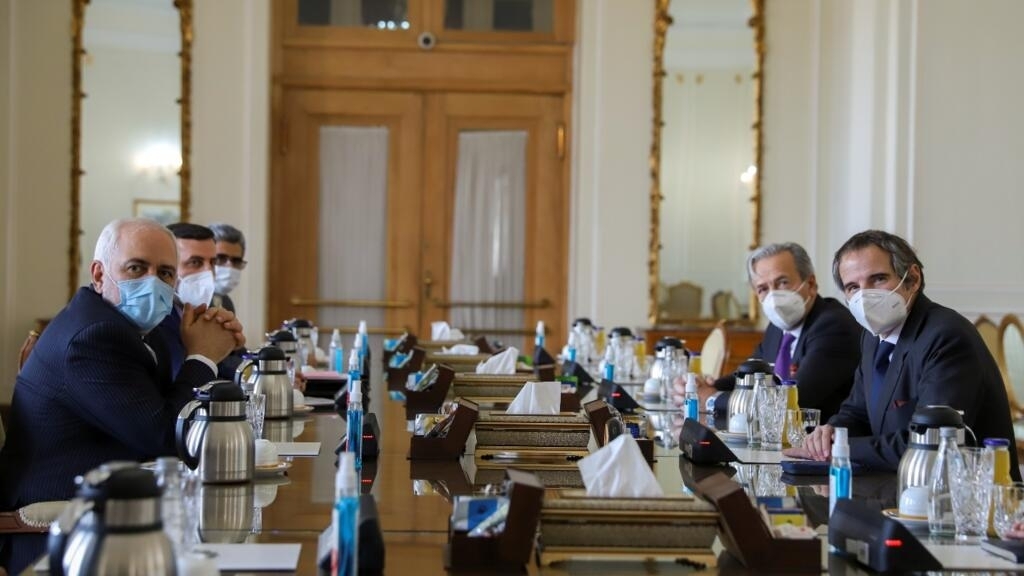 Iran said Sunday it had held “fruitful discussions” with UN nuclear watchdog chief Rafael Grossi in Tehran, ahead of a deadline when it is set to restrict the agency’s inspections unless the United States lifts painful sanctions.

Grossi’s visit comes amid stepped-up efforts between US President Joe Biden’s administration, European powers and Iran to salvage the 2015 nuclear deal that has been on the brink of collapse since Donald Trump withdrew from it.

Iran’s Foreign Minister Mohammad Javad Zarif, before meeting Grossi, signalled that the Islamic republic wants to avoid an “impasse”, but also warned it could step further away from its commitments if Washington does not lift the sanctions.

“Iran and the IAEA held fruitful discussions based on mutual respect, the result of which will be released this evening,” Tehran’s ambassador to the UN agency Kazem Gharibabadi wrote on Twitter.

Grossi, who also met with Zarif later on Sunday, was due to hold a press conference when he returns to Vienna in the evening.

Iran’s conservative-dominated parliament months ago demanded that, if the US does not lift sanctions by this Sunday, Iran suspend some IAEA inspections from Tuesday.

But Iran has stressed it will not cease working with the IAEA or expel its inspectors.

Zarif told Iran’s Press TV Sunday he would talk to Grossi about implementing Iran’s law while making sure “not to create an impasse, so that he carries out the obligations to show that Iran’s nuclear programme remains peaceful”.

Iran’s deputy foreign minister Abbas Araghchi said late Saturday the “IAEA’s inspection capability will be reduced by about 20-30 percent after the implementation of the parliament’s law”.

Iran has notified the UN body it will suspend “voluntary transparency measures”—notably inspection visits to non-nuclear sites, including military sites suspected of nuclear-related activity—if the US fails to lift the sanctions Trump reimposed in 2018.

Zarif said the law mandates the government to “not provide the tapes” of cameras at sites to the IAEA, adding that technical details would be discussed in Tehran.

“We are not violating the JCPOA, we are implementing remedial measures foreseen in the JCPOA itself,” Zarif insisted, referring to the nuclear deal, known as the Joint Comprehensive Plan of Action.

“Once everybody implements their part and their obligations, then there will be talks, and those talks will not be about changing or adding to the agreement.”

Biden has committed to rejoin talks on Tehran’s nuclear programme, in a shift away from Trump’s policy of “maximum pressure” towards the Islamic republic.

Tehran has repeatedly said it is ready to return to its nuclear commitments, on the condition Washington makes the first move by lifting the sanctions that have heaped economic pain on Iran.

Zarif said that, from Iran’s point of view, “nothing has changed”, as the Biden administration had so far followed the same Iran policy as his predecessor.

Iran’s top diplomat warned that if US sanctions are not lifted, Iran will continue scaling back its commitments under the deal it agreed in 2015 with the five UN Security Council permanent members and Germany.

The stockpile of “enriched uranium will increase”, he said, stressing that Tehran has the right within the deal to stop observing commitments “totally or partially” if the other parties fail to honour theirs.

“We are still in the partial phase,” Zarif said. “We can be total.”

Araghchi said Saturday that “we are reviewing (this) proposal” and Iran was discussing the issue with “friends and allies such as China and Russia”.

“But, principally, we believe that America’s return to the JCPOA and lifting sanctions, and acting on its commitments, do not require negotiations.”

Zarif also stressed that “there won’t be any negotiations, period. Not before or after” the US returns to the deal.