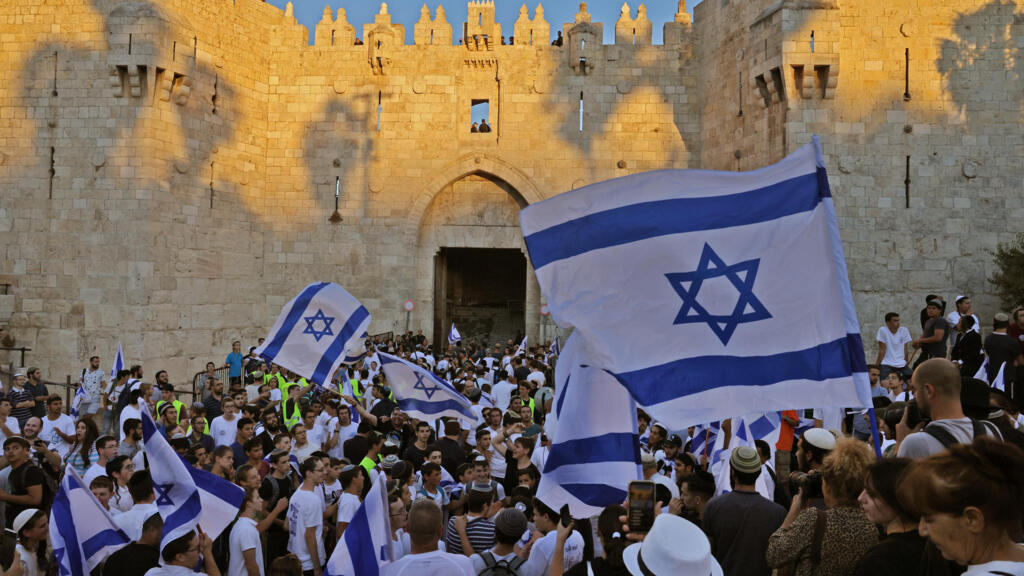 More than a thousand ultranationalist demonstrators bearing Israeli flags poured into Jerusalem’s flashpoint Old City on Tuesday in a march that posed a key test to Israel’s new government on its second full day in office.

With tensions high amid a month-old ceasefire that ended days of deadly fighting between Israel and Gaza militants, police deployed heavily, using stun grenades and foam-tipped bullets to clear the area of Palestinians.

The so-called March of the Flags celebrates the anniversary of the city’s “re-unification” after Israel captured its east, including the Old City which houses sites holy to all three Abrahamic faiths, in 1967.

Outside the Damascus Gate entrance to the ancient walled warren, throngs of mostly young, religious men sang, danced and waved flags triumphantly at a plaza that was cleared of its usual Palestinian crowds.

Some revelers chanted of “Death to Arabs” before others quieted them.

Student Judah Powers, 24, draped an Israeli flag over his back and said he had come to show “that we have the right as Jews, as Israelis, to walk on every single inch of this city.”

Rallies by ultranationalist Jewish groups in Jerusalem helped spark a police raid into the Al-Aqsa mosque compound last month that triggered the deadliest flare-up of Israeli-Palestinian violence since 2014.

Tuesday’s demonstration was originally scheduled for early May, but cancelled twice amid police opposition and threats from Hamas, the Islamist group that controls the Palestinian enclave of Gaza.

Police, with more than 2,000 reinforcements, blocked nearby streets and used foam-tipped bullets and stun grenades to disperse Palestinians. AFP reporters saw officers tackle a man and a woman for waving Palestinian flags.

“We are afraid even to walk” in the Old City, he told AFP, voicing doubts police could keep him safe during the march.

“I feel very bad,” he said. “Jerusalem is crying.”

The march comes just two days after former Prime Minister Benjamin Netanyahu was ousted from 12 straight years in power, toppled by an ideologically divided coalition including, for the first time in Israel’s history, an Arab party.

Bennett is himself a Jewish nationalist but Netanyahu’s allies accused the new premiere of treachery for allying with Arabs and the left.

Some demonstrators on Tuesday carried signs reading “Bennett the liar”.

Yair Lapid, the architect of the new government, said on Twitter that he believed the march had to be allowed but that “it’s inconceivable how you can hold an Israeli flag and shout, ‘Death to Arabs’ at the same time….These people are a disgrace to the nation of Israel.”

Mansour Abbas, whose four-seat Raam Islamic party was vital to the coalition, called Tuesday’s march a “provocation” that should have been cancelled.

Ahmed Tibi from the Joint List bloc of Arab opposition parties said his faction had twice asked the government to cancel the march because “the only flag legitimate (at Damascus Gate) and in east Jerusalem is the Palestinian flag.”

UN Middle East peace envoy Tor Wennesland said it was a “very fragile & sensitive” time and urged all sides to avoid threatening a hard-won May 21 ceasefire that ended 11 days of heavy fighting in and around Gaza.

Israel’s annexation of east Jerusalem is not recognised by most of the international community which says the city’s final status should be negotiated with the Palestinians — who claim the city’s east as the capital of their future state.

The iconic Al-Aqsa Mosque compound in the Old City is Islam’s third holiest site and a national symbol for all Palestinians.

It is also Judaism’s most holy site, where two Jewish temples stood in antiquity.

Ahead of the march Tuesday, militants in Gaza sent incendiary balloons over the border. Israeli authorities reported 20 resulting fires near the blockaded enclave.

Palestinian demonstrators also set alight tyres and hurled rocks at Israeli security forces near checkpoints outside the cities of Bethlehem and Ramallah in the occupied West Bank.

When the march was originally announced for last week, senior Hamas official Khalil Hayya warned it could spark a return to violence.

Last month’s conflict started after Hamas issued a deadline for Israel to remove its security forces from flashpoint areas of east Jerusalem, and then fired a barrage of rockets at Israel when the ultimatum went unheeded.

Israeli strikes on the Gaza Strip killed 260 Palestinians including some fighters, the Gaza authorities said.

In Israel, 13 people were killed, including a soldier, by rockets and missiles fired from Gaza, the police and army said.