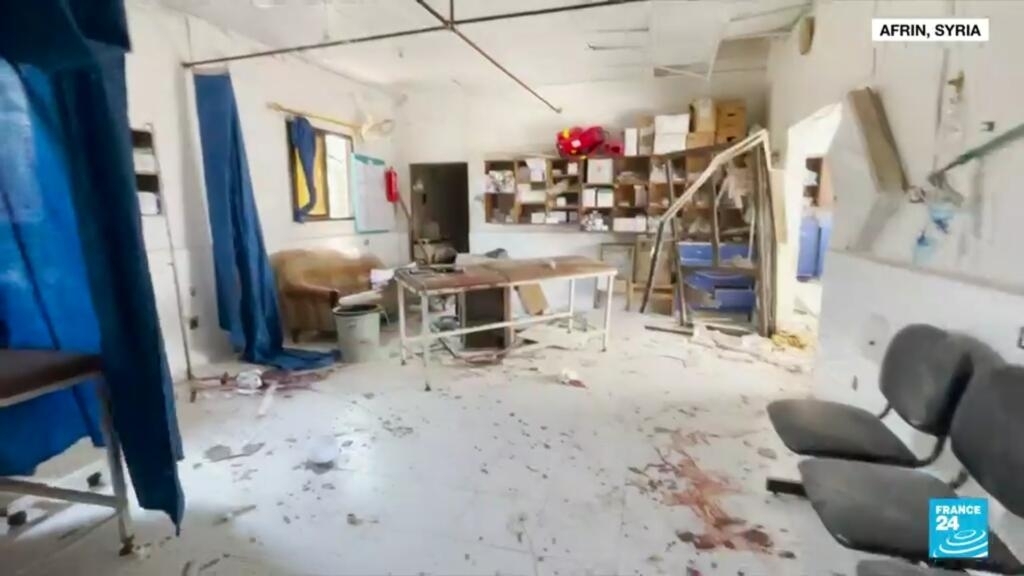 At least 18 people were killed, including doctors, after shells hit the al Shiifa hospital in Afrin, northern Syria on Sunday, leaving the maternity ward and emergency room in ruins. FRANCE 24 reports from the town controlled by Turkish-backed opposition fighters, where local authorities place the blame on Kurdish rebels.

The windows are shattered, much of the ceiling has collapsed and blood still stains the floor of the al Shiifa hospital in Afrin. The hospital was crowded when two shells hit the structure two days ago.

“There was an attack on the city near the hospital and injured people were brought here,” hospital director Hussam Adnan explains. “An hour later a rocket hit it. It destroyed both the maternity ward and here, the emergency unit.”

It is not clear who was behind the attack that also wounded dozens and came from areas where both Syrian government troops and Kurdish-led fighters are deployed.

Although the Syrian American Medical Society, which operates in the hospital, has called for an investigation into the deadly attack, local authorities do not seem to see much need, pointing the finger at Turkish President Recep Tayyip Erdogan’s biggest foes: Kurdish rebels. While attending the NATO summit in Brussels on Monday, the Turkish leader suggested the attack on Afrin was an attack on the alliance’s southern border.

Syrian democratic forces, meanwhile, reject the accusations against the Kurdish militias, and regional observers believe the attack was staged by groups fighting on behalf of Iran or the Syrian regime.

For the full report, please click on the player above.