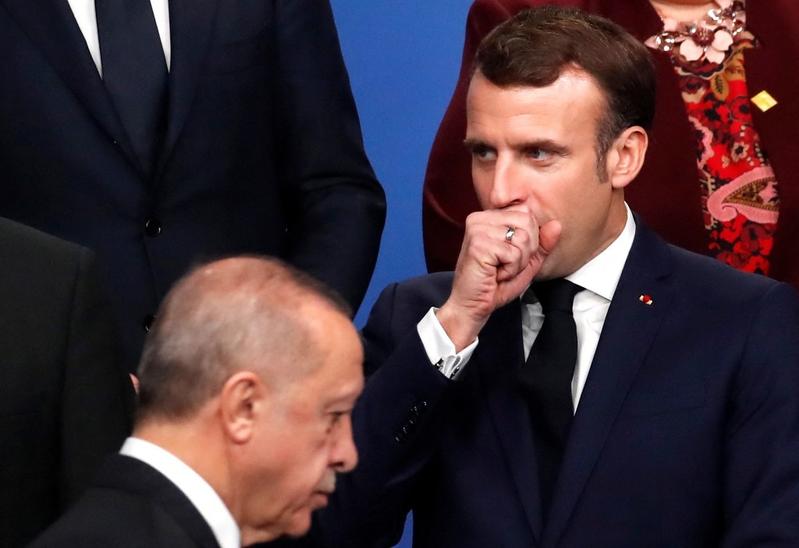 France’s President Emmanuel Macron (right) gestures as Turkey’s President Recep Tayyip Erdogan walks past him during a family photo as part of the NATO summit at the Grove hotel in Watford, northeast of London on Dec 4, 2019. (CHRISTIAN HARTMANN / POOL / AFP)

Ankara has repeatedly traded barbs with Paris over its policies on Syria, Libya, the eastern Mediterranean and other issues, but the NATO members said in February they were working on a road map to normalise relations.

Turkish President Tayyip Erdogan spoke with his French counterpart Emmanuel Macron on Tuesday as part of those efforts.

“There aren’t any more insults and the language is more reassuring,” Jean-Yves Le Drian told a parliamentary hearing late on Tuesday.

He said that the removal of Turkish research vessels from Cypriot waters in the eastern Mediterranean and Ankara showing a desire to resume talks with Greece over a long-standing maritime dispute were positive signs.

“It’s fragile, because the list of disagreements is very long, but we want a healthy relationship with Turkey,” he said pointing to differences over Libya, Iraq and Nagorno-Karabakh.

“Actions are needed and we will be able to position ourselves when those actions are carried out. For now it’s just verbal action,” he said.