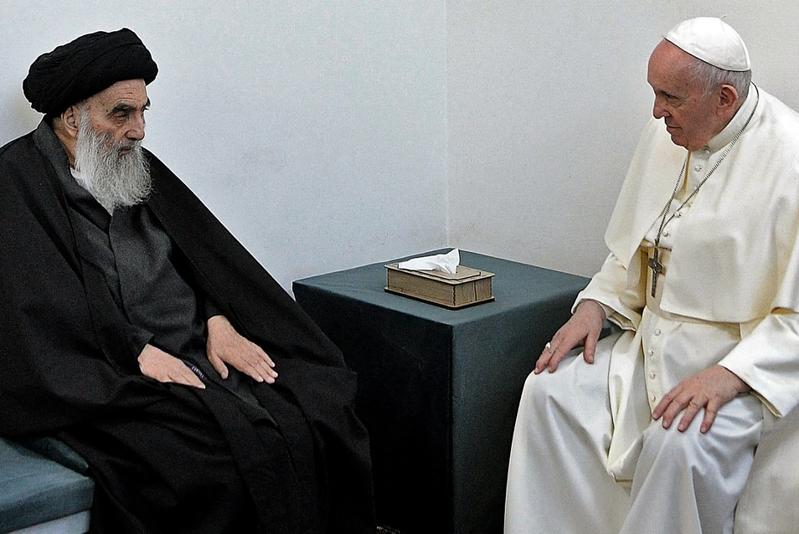 NAJAF, Iraq – Pope Francis held a historic meeting with Iraq’s top Shi’ite cleric Grand Ayatollah Ali al-Sistani on Saturday, in a powerful appeal for coexistence in a land torn by sectarianism and violence.

Grand Ayatollah Ali al-Sistani agreed to meet Pope Francis on condition that no Iraqi officials would be present, said a source in the president’s office

Francis’s meeting in the holy southern city of Najaf, during a whirlwind and risky tour of Iraq, marked the first time a pope has met with such a senior Shi’ite cleric.

Children lined a street and waved Iraqi and Vatican flags at the leader of the world’s Catholics.

The pontiff has visited predominantly Muslim countries including Turkey, Jordan, Egypt, Bangladesh, Azerbaijan, the United Arab Emirates and the Palestinian territories, using those trips to call for inter-religious dialogue.

ALSO READ: Pope urges Iraqis to shun past violence, give peace a chance

After his 55-minute meeting with Sistani, Francis headed to the ruins of ancient Ur in southern Iraq, revered as the birthplace of Abraham, father of Judaism, Christianity and Islam. He is scheduled to give a speech at an interreligious meeting.

After flying back to Baghdad, he is expected to deliver mass at the Chaldean Cathedral of Saint Joseph.

Sistani is one of the most important figures in Shi’ite Islam, both within Iraq and beyond.

He wields enormous influence over politics. His edicts sent Iraqis to free polls for the first time in 2005, rallied hundreds of thousands of men to fight against Islamic State in 2014 and toppled an Iraqi government under pressure from mass demonstrations in 2019.

Sistani, 90, rarely takes meetings, and has refused talks with Iraq’s current and former prime ministers, according to officials close to him. Sistani agreed to meet the pope on condition that no Iraqi officials would be present, said a source in the president’s office.

The meeting with Francis took place at Sistani’s humble home which he has rented for decades, located along a narrow alleyway in Najaf. 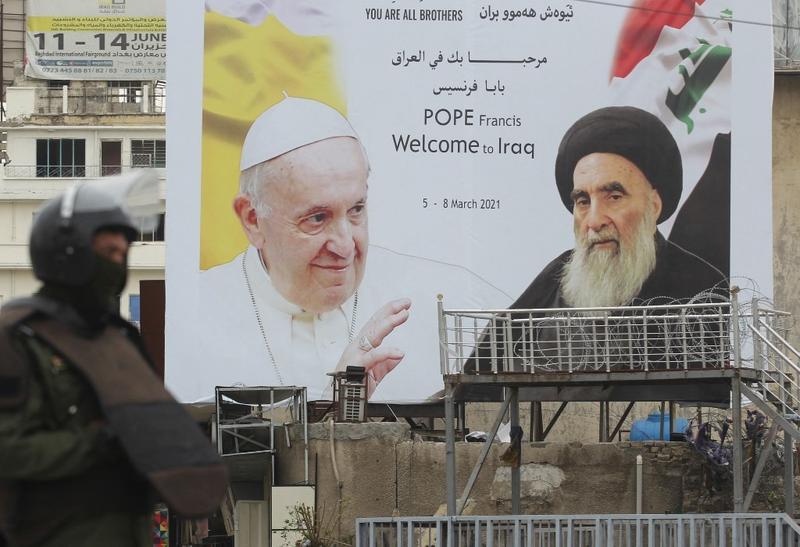 An Iraqi security guard stands in front of a huge billboard bearing portraits of Pope Francis and Grand Ayatollah Ali Sistani (right) in central Baghdad on March 4, 2021, on the eve of the pontiff’s first visit to Iraq. (AHMAD AL-RUBAYE / AFP)

An ascetic cleric of almost mythical stature among millions of Shi’ite followers, Sistani intervened at critical junctures as Iraq lurched from one crisis to another.

A gaunt figure, the reclusive Sistani worked from his spartan base near the golden-domed Imam Ali shrine in Najaf. He was rarely seen in public.

Pope Francis began his most risky foreign trip on Friday, flying into Iraq amid the tightest security ever seen for a papal visit to appeal to the country’s leaders and people to end militant violence and religious strife.

Pope Francis said he was making the trip to show solidarity with Iraq’s devastated Christian community of around 300,000

The country has deployed thousands of security personnel to protect him during the visit, which comes after a spate of rocket and suicide bomb attacks and a spike in COVID-19 cases.

Francis said he was making the trip to show solidarity with Iraq’s devastated Christian community of around 300,000, just one fifth of the number before the US invasion in 2003 and the brutal Islamist militant violence that followed.

Pope John Paul II came close to visiting, but had to cancel a planned trip in 2000 after talks with the government of then-leader Saddam Hussein broke down.

The 84-year-old Francis, limping from what appeared to be a fresh flare-up of his painful sciatica, made an impassioned call for Iraqis to finally give peacemakers a chance during a gathering of Iraqi officials and diplomats at the presidential palace.

He later paid tribute to people killed in attacks motivated by religion, visiting a Baghdad church where Islamist gunmen killed about 50 worshippers in 2010.

Iraq’s security has improved since the defeat of Islamic State in 2017, but the country continues to be a theatre for global and regional score-settling, especially a bitter US-Iran rivalry that has played out on Iraqi soil.

The US invasion of 2003, after years of international sanctions and a devastating war with Iran instigated by former leader Saddam Hussein in the 1980s, plunged Iraq into sectarian conflict and chronic mismanagement that has plagued it since.