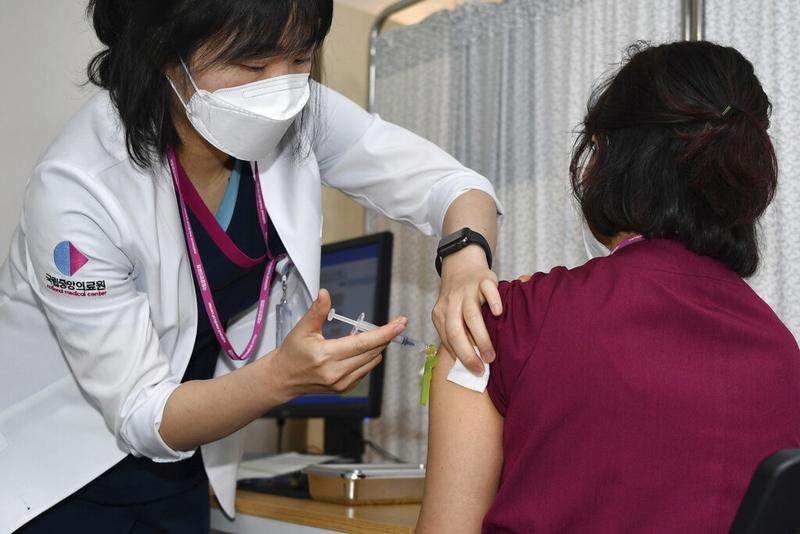 JERUSALEM / BEIRUT / TEHRAN – A decision by South Korean health authorities to allow more doses to be extracted from coronavirus vaccine vials sparked controversy on Tuesday as the country ramped up its vaccinations of healthcare workers and the elderly.

The Korea Disease Control and Prevention Agency (KDCA) had allowed healthcare workers to use the remaining doses if they can squeeze more out of each vial with low dead space syringes, which minimize the amount of vaccine left in the syringe after use.

While offering discretion over the use of remaining doses, KDCA made clear the authorities will not make the extraction of the extra doses a new standard or mandatory as it can burden the healthcare workers on site.

Experts were divided about the decision for permitting up to seven doses to be extracted from Pfizer vaccine vials which are made to contain only six using the low dead space syringes, and up to 12 doses from AstraZeneca’s vaccine, which would otherwise inoculate 10 people with normal syringes.

Eom Joong-sik, professor of infectious diseases at Gachon University Gil Medical Center, warned of the risk of contamination during inaccurate extraction of the extra seventh dose.

A worker trying to combine leftovers from two vials to make a full dose could lead to such problems, Eom said in a Facebook post.

The government hasn’t made it mandatory to squeeze extra dose out of a vial and there is a designated person in charge of extraction in large medical centres, which makes it easier for them to draw an extra dose safely, said Ki Mo-ran, professor of cancer control and population health at National Cancer Center.

KDCA said 23,086 people were given first doses of AstraZeneca and Pfizer shots by Monday midnight.

South Korea reported 344 more cases of COVID-19 as of midnight Monday compared to 24 hours ago, raising the total number of infections to 90,372.

The Philippines has detected its first six cases of a more contagious COVID-19 variant found in South Africa, its health ministry said on Tuesday.

Health Undersecretary Maria Rosario Vergeire expressed concern about the detection of the variant, which can spread more readily like the variant found in Britain, adding that the variant could evade immune responses and reduce vaccine efficacy.

“That is why we have to be vigilant about the variant (found in South Africa). We want fast containment of this variant so that we can prevent it from further spread,” Vergeire said in an online briefing.

Of the six variant cases, Vergeire said three are local cases, and two are returning overseas Filipinos. The DOH is still checking the location of the remaining case.

Health Secretary Francisco Duque said investigations are underway to establish the link between the local cases and the returning Filipinos that tested positive for the new variant.

Israel will discuss the possibility of a COVID-19 vaccine venture with Austria and Denmark, Prime Minister Benjamin Netanyahu said on Monday.

The leaders will also talk about the idea of “an international corporation for manufacturing vaccines,” he said.

Netanyahu has made Israel’s successful vaccine program, and what he has highlighted as his personal role in securing sufficient doses, a showcase of his campaign in the run-up to the March 23 national election.

Israelis returning home from abroad have a new option that will exempt them from being sent to a quarantine hotel: They can wear a bracelet monitor that will notify authorities should they violate a mandatory isolation period.

The pilot program began on Monday with 100 tracking systems available at Ben Gurion Airport, where traffic has dropped dramatically due to restrictions meant to reduce the risk of COVID-19 variants entering the country.

Incoming passengers have been forced to stay at hotels, paid for by the government, for up to two weeks to make sure they are virus-free before they can move around freely.

Should someone choose the new system — which includes an electronic bracelet, a smartphone and a wall-mounted tracker — they can self-isolate at home.

Iranian health authorities issued a warning on Monday over a “fourth wave” of the COVID-19 epidemic, after registering more than 100 deaths in 24 hours for the first time since early January, state TV reported.

“The death of 108 patients of COVID-19 in the past 24 hours is sounding the alarm of the fourth wave of the disease,” Sima Sadat Lari, spokeswoman for Iran’s Ministry of Health and Medical Education, said at her daily briefing.

The total number of COVID-19 cases registered in Iran stands at 1,639,679, according to the official data.

Moreover, 1,399,934 COVID-19 patients have recovered or been released from Iranian hospitals so far, though 3,727 remain in critical condition, said the spokeswoman.

“It is not possible to take normalization steps in an environment where the pandemic is spreading. As Turkey is a big country in terms of geographical area and population, we need to take gradual steps,” Erdogan said at a press conference after a cabinet meeting.

The 81 provinces in Turkey will be divided into four categories of low, medium, high and very high risk according to their COVID-19 situation based on infection rates and the vaccination process. The provinces will be evaluated every week and their normalization applications will be updated, according to Erdogan.

Cafes and restaurants, which were allowed only for take-away and delivery, will now be able to host customers between 7 a.m. and 7 p.m. with half capacity, yet excluding very high-risk provinces.

The civil servants will return to normal working hours across Turkey, the president noted.

The weekday curfew will continue across the country between 9 p.m. and 5 a.m., while the weekend curfew restrictions in low and medium-risk provinces will be lifted, and lockdown will remain in high and very high-risk regions on Sunday.

Mobility restrictions for people over 65 and under 20 are abolished in low and medium-risk provinces.

The death toll from the COVID-19 in Israel reached 5,760 after 22 new fatalities were added, while the number of patients in serious condition decreased from 776 to 737, out of 1,238 hospitalized patients.

The number of people vaccinated against COVID-19 in Israel has surpassed 4.74 million, or 51 percent of its total population, since the vaccination campaign began on Dec. 20, 2020.

The country’s COVID-19 reproduction number, also known as the R number, rose to 1, higher than 0.79 about a week ago.

Lebanon registered on Monday 1,888 new COVID-19 cases, raising the number of infections in the country to 376,921, the Health Ministry said.

Kuwait reported on Monday 1,179 new COVID-19 cases, bringing the total number of confirmed cases in the country to 192,031.

The Kuwaiti Health Ministry also announced two more deaths, taking the death toll to 1,085. The tally of recoveries in Kuwait rose by 946 to 180,155, while 10,791 coronavirus-related patients were receiving treatment.

Meanwhile, 440 more people recovered from the virus, bringing the overall recoveries to 154,061, while the fatalities increased by one to 259, according to a ministry statement quoted by QNA.

Myanmar reported 20 more COVID-19 cases on Monday, bringing the tally in the country to 141,916, according to a release from the Ministry of Health and Sports.

No new death was reported and the death toll remained at 3,199, the release said.

According to the ministry’s figures, 131,487 patients have been discharged from the hospitals and over 2.49 million samples have been tested for COVID-19 so far.

A total of 836 samples were tested on Monday, down from around 10,000 samples tested daily in the first week of last month.

Meanwhile, 226 people recovered during the past 24 hours, taking the overall recoveries to 132,685, while seven people reportedly died, pushing the death toll up to 1,577, according to a ministry statement quoted by ONA.

The four imported cases came from India, Ethiopia and Canada, and have remained in managed isolation facilities in Auckland, according to the Ministry of Health.

Mongolia’s COVID-19 tally reached 3,000 on Tuesday as 48 new cases were registered in the past 24 hours, according to the country’s National Center for Communicable Diseases (NCCD).

The latest cases were locally transmitted and detected in the country’s capital Ulan Bator, which is hit hardest by the COVID-19 outbreak, the NCCD said in a statement.

About 2,600 of the total confirmed cases were domestically transmitted, and more than 2,100 of the domestic infections were detected in Ulan Bator, which is home to over half of the country’s 3.3-million population.

Nearly 78 percent of all the patients in the country have recovered from the disease, according to the center.

Vardhan visited the Delhi Heart and Lung Institute hospital along with his wife Nutan Goel to get inoculated.

“Health minister along with his wife today took their first COVID-19 shots at Delhi Heart and Lung Institute”, an official said.

India’s COVID-19 tally rose to 11,124,527 on Tuesday, as 12,286 new cases were registered during the past 24 hours, according to the latest data from the federal health ministry.

The official data shows that the death toll mounted to 157,248 as 91 COVID-19 patients died since Monday morning.

There are still 168,358 active cases in the country, while 10,798,921 people have been discharged so far from hospitals after medical treatment. There was a decrease of 269 active cases during the previous 24 hours.

The phase 2 of the ongoing COVID-19 vaccine drive began in the country on Monday, during which those above the age of 60 and those over 45 with comorbidities will be vaccinated.

More than 18,100 enterprises were established in Vietnam in the first two months of this year, posting an increase of 4 percent against the same period last year, according to the country’s General Statistics Office on Tuesday.

The registered capital of the new enterprises totaled 334.8 trillion Vietnamese dong (US$14.6 billion), up 52.2 percent year on year, said the office.

Specifically, business registration in February decreased in quantity but rose in registered capital against January, which was a positive sign amid the complex developments of the COVID-19 pandemic in the country, the office noted.

In the period, the number of new firms in the agriculture, forestry and fishery sector grew 19.2 percent year on year, while those in the industry and construction sector expanded 5.6 percent and the services sector up 3 percent.

Over 11,000 firms, which previously temporarily ceased operations due to difficulties, resumed their activities. Meanwhile, around 3,600 enterprises were dissolved, up 28.1 percent from the first two months of 2020.

Cambodia confirmed 24 more local cases of COVID-19 on Tuesday, raising the total number of infected people linked to the third community transmission to 340, the Ministry of Health (MoH) said in a statement.

The new cases were detected in the capital Phnom Penh and the southwestern Preah Sihanouk province, the statement said, adding that they were all related to the third community outbreak on Feb. 20.

The patients are currently undergoing treatment in designated COVID-19 hospitals, it said.

Thailand on Tuesday confirmed 42 new COVID-19 cases, mostly domestic, and one more fatality, according to a report of the Center for the COVID-19 Situation Administration (CCSA).

Of Tuesday’s new cases, 39 were domestic infections while three others were imported cases, the CCSA report said.

Those domestic cases included 24 detected in Samut Sakhon, among other provinces, according to the report.

The new fatality, reported on Tuesday, was a 92-year-old Thai man, who had contracted the virus from an infected vendor at a marketplace in Pathum Thani. The deceased reportedly had heart disease, diabetes and high blood pressure.

So far, 25,420 patients have fully recovered and been released from hospitals while 569 others are currently hospitalized and 84 fatalities have been reported.