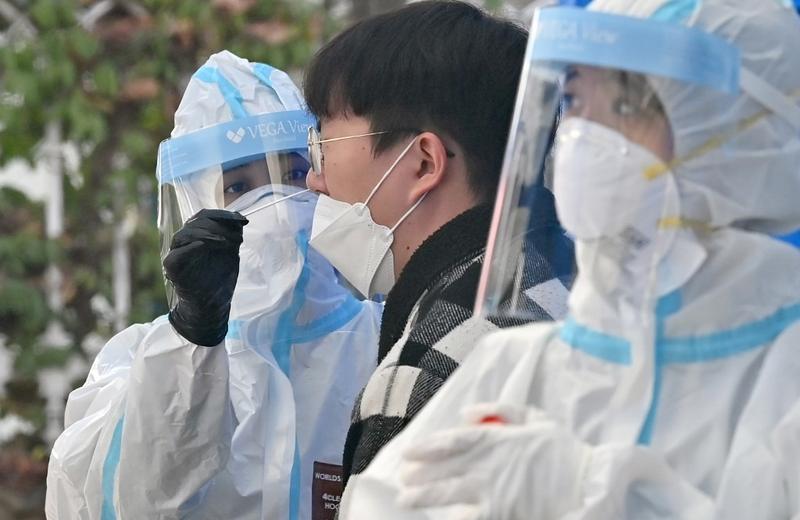 A medical staff (left) wearing protective gear takes samples for the COVID -19 test from a visitor at a testing station in Seoul on Nov 27, 2020. (PHOTO / AFP)

The daily tally of 569 came a day after the numbers hit the highest level since March 6.

Prime Minister Chung Sye-kyun warned that daily infections could swell to 1,000 and bring a greater crisis including hospital bed shortages if social distancing measures and other restrictions failed to stop the contagion.

“The situation is extremely serious and acute, as all of the 17 metropolitan cities and provinces and especially all the 25 districts in Seoul are reporting new cases,” Chung told a meeting on COVID-19 responses.

Victoria has gone 28 days with no new cases of the virus, suggesting Australia will be among a handful of western nations that can look forward to Christmas with limited restrictions on family gatherings. The state reported a daily peak of about 700 cases in early August.

The 28-day run is “an extraordinary achievement psychologically as well as practically, in terms of opening up the economy,” said Sanjaya Senanayake, an infectious diseases physician and associate professor of medicine at the Australian National University in Canberra.

India’s COVID-19 tally reached 9,309,787 on Friday as 43,082 new cases were registered during the past 24 hours, said the latest data from the federal health ministry.

According to the data, the death toll mounted to 135,715 as 492 COVID-19 patients died since Thursday morning.

This is the first time in the past few days when the number of deaths per day fell below 500-mark.

Zydus Cadila’s COVID-19 vaccine is likely to enter phase III trials next month and a launch is expected by March if things go according to the plan, The Economic Times reported.

An empty street in Adelaide during day one of total lockdown across the state on Nov 18, 2020. (BRENTON EDWARDS / AFP)

Israel’s Ministry of Health reported 505 new COVID-19 cases and one more death, bringing the total infections in the country to 332,420 and the death toll to 2,827.

On Friday morning, major shopping malls, markets and museums in Israel will reopen for the first time to ease the full lockdown imposed on Sept. 18. Under the Israeli Corona Cabinet’s decision, these places will be opened under restrictions, such as preventing gatherings, especially at the entrances.

Tokyo posted its highest one-day number of coronavirus infections to date, with 570 cases recorded, on the final day before a request for bars and restaurants to close early comes into effect on Saturday.

Some of the increase is likely due to a three-day weekend through Monday, which typically delays testing and recording of cases. The seven-day average of cases stands at 411, still lower than earlier in the week. The city also reported the most tests ever conducted in a single day, at almost 10,000.

Severe COVID -19 cases in the capital, which the local government is tracking closely as its yardstick for requesting restrictions on businesses, rose to 61 from 60 the day before.

Japan’s Imperial Household Agency has cancelled an annual New Year’s event set for Jan. 2, at which Emperor Naruhito and other imperial family members were to greet well-wishers, because of the coronavirus pandemic.

“We have decided not to hold (the event) from the viewpoint of preventing the spread of the novel coronavirus,” the agency said on its website on Friday.

As the coronavirus resurges in Japan, politicians and experts are growing more divided on the impact that a subsidy program encouraging people to travel is having on the spread of COVID-19.

The Kuwaiti Health Ministry also announced the recovery of 717 more patients, taking the total recoveries in the country to 134,750.

The latest confirmed cases were all locally transmitted, Amarjargal Ambaselmaa, head of the NCCD’s surveillance department, said at a daily press conference.

Mongolia has so far reported 311 domestically transmitted cases, notably in the capital city of Ulan Bator and the provinces of Selenge, Darkhan-Uul, Govisumber, Orkhon and Dornogovi.

New Zealand reported seven cases of COVID-19 in managed isolation on Friday. There are no new cases in the community.

All cases are being moved to quarantine rooms within the facility. Members of the team will be tested a minimum of four times while in managed isolation, said a ministry statement.

Samer al-Asaad, director of preventive medicine at the Palestinian Ministry of Health, told Xinhua that the significant increase in the COVID-19 cases in Palestine was related to the coronavirus situation in the neighboring states.

In Qatar, the health ministry confirmed 215 new COVID-19 infections, raising the total confirmed cases in the Gulf state to 138,066.

It added that the tally of recoveries rose by 248 to 135,198, while its total fatalities remained unchanged at 237 for the second consecutive day.

Singapore will tighten the border control measures on travelers from Finland and Turkey, requiring them to serve 14-day isolation at dedicated facilities upon arrival in Singapore.

The announcement was made given the increase in cases in Finland and Turkey, according to a press release from the Ministry of Health on Thursday.

Starting from 23:59 local time of Nov. 28, all visitors who have a travel history in the past 14 days to Finland and Turkey will be required to serve a 14-day Stay-Home Notice (SHN) at dedicated SHN facilities, MOH said.

Samoa reported on Friday one more COVID-19 case, bringing the total number of COVID-19 cases to two in the island nation.

According to Samoa Observer, Samoa’s Director General of Health Leausa Take Naseri said on Friday that a 70-year-old Samoan man has tested positive for COVID-19 while in quarantine after arriving in Samoa on a repatriation flight from Auckland and Melbourne two weeks ago.

He tested negative upon his arrival but the result of the second test was positive.

Thai Prime Minister Prayut Chan-o-cha on Thursday emphasized on the urgency of purchasing COVID-19 vaccines, on the eve of inking a contract between Thailand’s National Vaccine Institute and vaccine developer AstraZeneca Plc.

“Thailand managed to prevent a resurgence of COVID-19 infections, and that was the result of cooperation from all state and private agencies,” said Prayut via state television.

“If we had lax effort in containing the virus, it would have taken a huge toll on Thailand’s national health system and a grim economy that was already suffering from serious drought and a slow global economy in the pre-pandemic era,” he said.

The Philippines signed a deal with AstraZeneca Plc to buy 2.6 million coronavirus vaccine doses, amid questions about the vaccine’s trial results.

Philippine companies will buy the vaccine doses, and donate half to government, presidential adviser on entrepreneurship Joey Concepcion said during the virtual signing. The vaccines may arrive in the Southeast Asian nation by May or June and help about 1.5 million people, he added.

The private sector is in talks with AstraZeneca to buy 1 million more doses, vaccine czar Carlito Galvez said at the same event.

Turkey’s daily number of coronavirus deaths hit a record high for a fourth consecutive day with 174 in the past 24 hours, data from the Health Ministry showed on Thursday, and it also reported the highest number of new daily infections yet.

Data showed that Turkey recorded 29,132 COVID-19 cases, including asymptomatic ones, on Thursday. From July until Wednesday, Ankara had only reported symptomatic cases, of which there were 6,876 on Thursday, raising the total number to 474,606. The total number of deaths stood at 13,014.

Thursday’s new case tally was also the highest daily number reported since the beginning of the pandemic but historical data and the cumulative number of all cases is still not available.