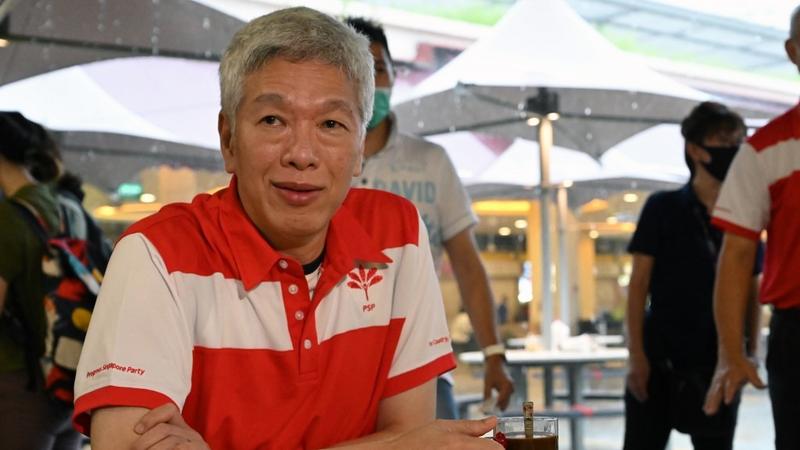 Lee Hsien Yang, the brother of Singapore Prime Minister Lee Hsien Loong, is pictured after being presented with his membership card for the opposition Progress Singapore Party during an event at Tiong Bahru Market in Singapore, June 24, 2020. (ROSLAN RAHMAN / AFP)

SINGAPORE – When the brother of Singapore’s prime minister joined the opposition to the party their father led through the city-state’s independence and rise as a nation, he brought a bitter family squabble into the realm of politics on the eve of a general election.

Lee Hsien Yang, younger brother of Prime Minister Lee Hsien Loong and son of modern Singapore’s founder, Lee Kuan Yew, said last week he was a member of the new Progress Singapore Party (PSP). He said the People’s Action Party (PAP), which has governed Singapore since independence in 1965, had “lost its way” without his late father.

The younger Lee, 62 – described by people close to him as shy, distant from his powerful brother but not afraid to challenge the status quo – has made no policy statements or said whether he will run for office, something candidates for the July 10 election must declare on Tuesday.

It is not clear if his move can energize an opposition that holds just six of parliament’s 89 seats, and it is not expected to alter prospects for a lopsided ruling party win.

But Lee Hsien Yang’s dramatic move presents Singaporean voters an inversion of the campaign that the PAP is offering as Prime Minister Lee, 68, prepares to retire in the coming years.

The ruling party depicts the government’s aggressive response to the COVID-19 pandemic as this generation’s heroic sacrifice, harking back to the “Pioneer Generation,” led by Lee Kuan Yew, that forged the tiny island from a dot on Britain’s colonial map into a first-world economy.
Lee Hsien Yang’s rebuke: This is not our father’s PAP.

“I have never sought the limelight, and most people know that actually I value my own privacy,” Lee Hsien Yang told reporters on Sunday at a PSP event at a food court. “I’m here because I think sometimes we need to speak truth to power.”

He has criticized the PAP government for calling an election during a pandemic and its response to the COVID-19 outbreak, in which thousands of Singapore’s migrant workers have been infected. He has also criticized a 2019 “fake news” law that has been used against government opponents and said the PAP suffers from “narrow group-think” and mainly serves the elite in society.

“NOT UNDER HIS BROTHER’S SHADOW”

The Lee brothers were not close but had no major quarrels most of their lives, said a person close to the younger Lee. A business associate said Lee Hsien Yang was mild-mannered but defensive about his parents.

He had repeatedly said he was not interested in politics.

That changed after his father’s death in 2015, when Lee Hsien Yang and his sister alleged their older brother wanted to preserve the family home for political gain despite their father requesting it be demolished in his will.

The younger Lee said the lengthy feud did not motivate him to join the opposition.

The brothers, who declined to be interviewed for this article, were both army brigadier-generals but their careers have otherwise diverged.

Patriarch Lee Kuan Yew, known as LKY, wrote little in his memoirs about his younger son compared to mentions of the current prime minister but said in a 2011 interview Lee Hsien Yang was a “sensible and practical man” who was “not under his brother’s shadow.”

With an openly gay son, Lee Hsien Yang last year attended a Pride march in the conservative city-state where sex between men is outlawed.

Can this iconoclastic scion with the common touch make a difference?

Loke Hoe Yeong, author of a history of Singapore’s opposition, said Lee Hsien Yang’s arrival will energize opposition parties but could also antagonize voters who don’t think a family spat over a house should be aired publicly.

Former PAP lawmaker Inderjit Singh said Lee Hsien Yang’s presence in the opposition could sway some voters, who have always given the ruling party at least 60 percent of the vote.