A kindergarten teacher in southeastern China was sacked and detained for a week after making one of his students smell his foot and then publicly posting pictures of the incident on WeChat, local authorities said on Tuesday.

The teacher, identified by his surname Liu, said he was “cultivating [masochism] from childhood” and described the punishment as a form of training. Under this logic, the teacher would be “training” the boy to understand masochism, which means “deriving pleasure from one’s own humiliation”.

In two separate comments, Liu wrote, “do smell, smell carefully” and “have blocked parents and teachers”.

He shared three photos on WeChat of the boy holding his sock-adorned foot with both hands while pressing his nose against the sole. He made the masochism comments under the post, which was blocked from parents and teachers.

But, a WeChat contact of Liu screen-grabbed his post and shared it on Weibo, China’s twitter-like platform, and publicly denounced Liu’s actions before calling the police. 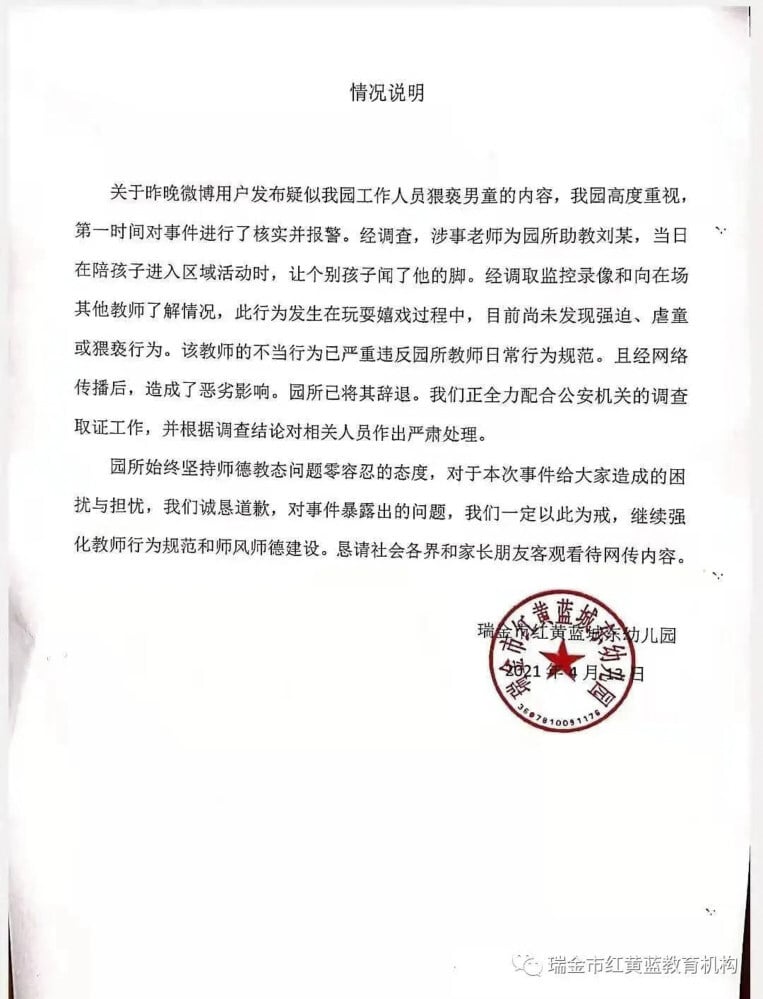 According to an investigation from the education department, the incident happened after the man took off his shoes before taking the children to a play area on Monday. The child in the photographs said that his feet were smelly. Liu then smelled them himself before making the kid do the same and taking the pictures.

The police intervened and detained Liu for seven days. Liu is still in police custody.

The Ruijin government has given the kindergarten a warning and ordered it to fire Liu, it said in a statement on Tuesday.

“It happened during playtime, and so far we haven’t found any forcible or abusive behaviour,” the kindergarten said in a separate statement on Tuesday.

However, the school added it “seriously violated the daily behavioural norms of teachers of the kindergarten” and deserved the dismissal due to the “bad social influence”.

The company has 1,300 play-and-learn centres and 400 kindergartens across the country, according to its official website.

RYB Education found itself in the middle of controversy before, including cases of child abuse.

In one incident, a 34-year-old teacher at one of its kindergartens in Qingdao, in eastern China’s Shandong province, was sentenced to five years in jail in 2019 for molesting a sleeping child during nap time. He will be deported after serving his sentence because he was a foreigner.

In 2018, a teacher at another RYB kindergarten in Beijing was sentenced to 18 months in jail for pricking children with sewing needles. – South China Morning Post