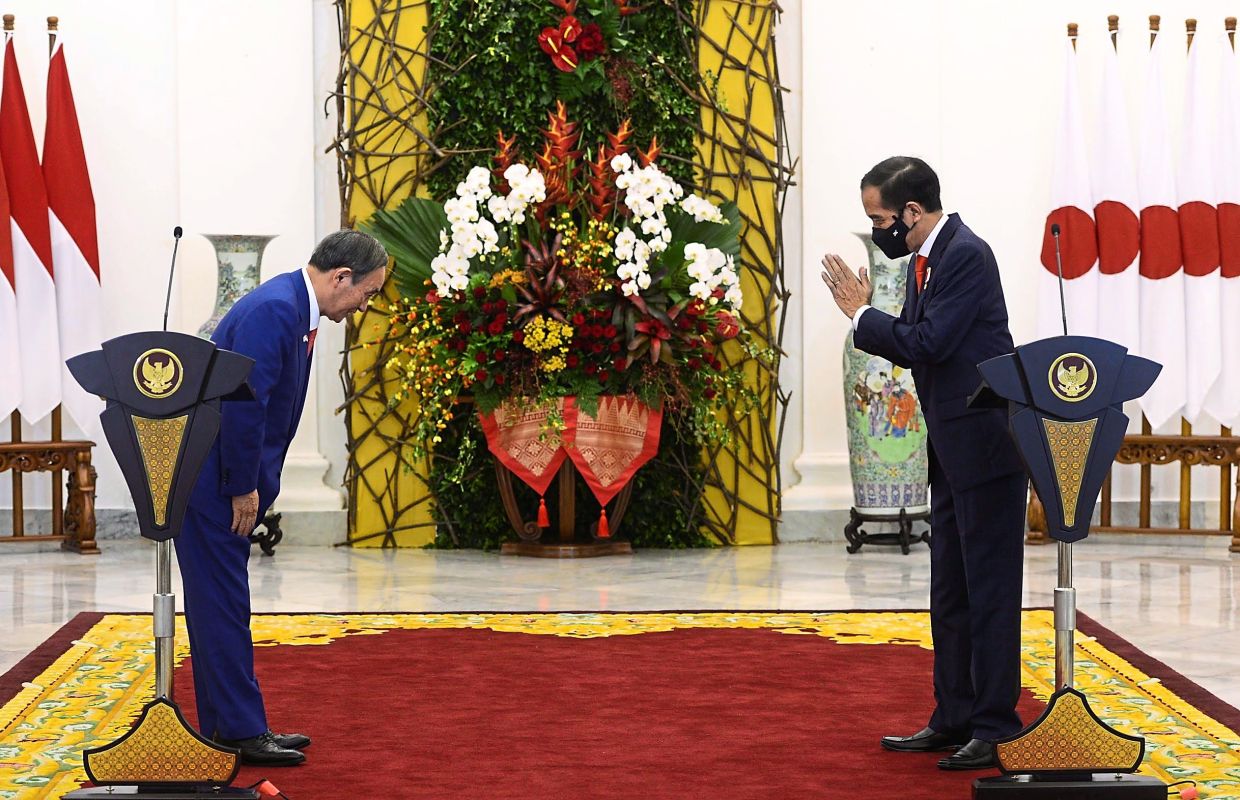 JAPAN’S new Prime Minister Yoshihide Suga seems to be quite the decisive fellow. Untroubled by opposition in the Home Islands, he is moving quickly to cement ties with friends and allies overseas. A surprise, as analysts initially believed that foreign policy would be one of Suga’s weak spots.

One of his earliest foreign policy moves is a phone call with Chinese President Xi Jinping, a clear signal that he wishes to continue Japan’s cordial relationship with China. However, he is also maintaining Japan’s relationship with the United States, having hosted the US Secretary of State Mike Pompeo in Tokyo earlier this month.

Closer to home, Suga has been visiting Vietnam, current Asean chair and Indonesia, Asean’s largest economy, this past week – his first overseas visits as Japan’s prime minister and a powerful show of intent.

“I think it is important to show… we put more emphasis and importance on that region,” former diplomat and Suga adviser Kunihiko Miyake was quoted as saying recently.

This is bitter news for Malaysia and should be ringing alarm bells somewhere in Wisma Putra. Why is the Asean country with arguably the longest ties with Japan not on his itinerary?

It is a little bit like finding that our old dance partner is taking someone else to the ball.

Malaysia’s long history with Japan did not begin with the Look East Policy (LEP), but the LEP has come to define the relationship between our two countries. We have been familiar dance partners ever since. Tower 1 of the Petronas Twin Towers, Kuala Lumpur International Airport and KL Sentral stand as testament to our long partnership.

Perhaps it comes from being out of touch for a while. Historically, Malaysia has always made the first move. We initiated the LEP, after all. That Japan wholeheartedly backed the idea was a surprise, but a pleasant one.

Our current silence could be giving Japan pause. Perhaps Japan is wondering if Malaysia still remembers the good times. Or Japan thinks Malaysia has been a bit neglectful, too busy dancing with other partners. Maybe Japan thinks the fire between us has fizzled out and its time it takes a spin around the dance floor with another.

Malaysia might be feeling that its relationship with Japan has run its course. This is not the 1980s, where Japan extended a hand in friendship to help us down the path to industrialisation.

Malaysia has moved past that stage now. We welcome their attention, and are always grateful if the foreign direct investment has a “Made in Japan” logo stamped on it, but we are also aggressively looking for other partners, too. But, in our aggressiveness, has Malaysia decided that courting Japan is no longer a priority?

Japan is a world leader in water treatment and river rehabilitation. Given what has been in our news recently, any help on those fronts would be appreciated. But let us not stop there. Let us also have a conversation about landslide prevention, environmental revitalisation and flood mitigation. Things Japan is really good at.

Malaysia has grown in the years since we first started dancing together. We know quite a few new moves and we would be happy to show them off. We are one of the pioneers of the global halal market, something Japan is keen to penetrate. Halal certification, halal tourism, Islamic finance – we practically wrote the book on the industry. We can exchange notes, elevate our current efforts, take the next step.

From agriculture to finance, green tech to gaming, there is so much we can offer each other. There are a thousand conversations we could be having. But we are not talking to each other. Which is puzzling, because we are not strangers to each other.

I hope that looking back on this period, it is remembered as an intermission, rather than the end of the dance. Because when we come together, it is like fireworks.

So, Malaysia, let us make the first move again. It is time to put on our dress shoes, lock eyes with our old partner and gesture towards the dance floor. We have so many things to talk about, after all. Japan is right across the dance floor, all she is waiting for is a sign.

But if we are too late, well, Vietnam and Indonesia are all dressed up, too.