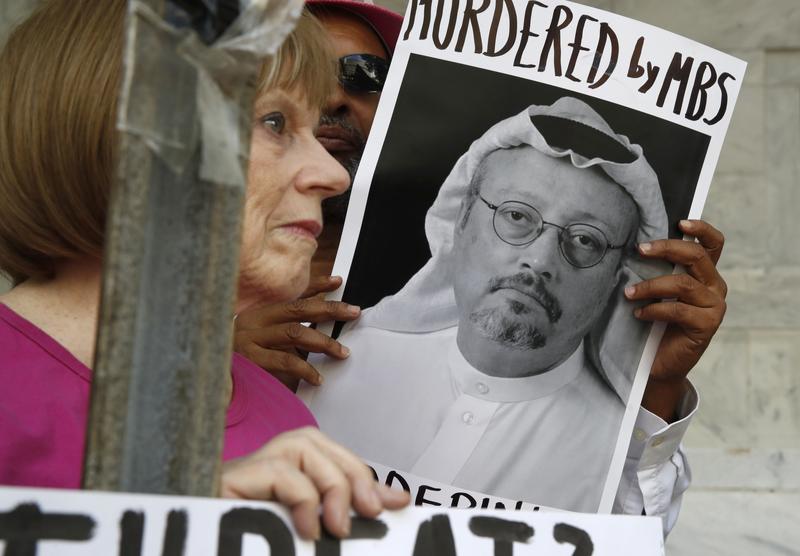 In this Oct 10, 2018, photo, people hold signs during a protest at the Embassy of Saudi Arabia about the disappearance of Saudi journalist Jamal Khashoggi, in Washington. (JACQUELYN MARTIN / AP)

WASHINGTON – A declassified version of a US intelligence report expected to be released on Thursday finds that Saudi Crown Prince Mohammed bin Salman approved the 2018 killing of journalist Jamal Khashoggi, four US officials familiar with the matter said.

The officials in the report, for which the CIA was the main contributor, assessed that the crown prince approved and likely ordered the murder of Khashoggi, whose Washington Post column had criticized the crown prince’s policies.

President Joe Biden, a Democrat who succeeded the Republican Donald Trump five weeks ago, told reporters on Wednesday he had read the report and expected to speak soon by phone with Saudi Arabian King Salman, 85, father of the crown prince, the country’s 35-year-old de facto ruler.

The report’s release is part of Biden’s policy to realign ties with Riyadh after years of giving the Arab ally and major oil producer a pass on its human rights record and its intervention in Yemen’s civil war.

Biden is working to restore the relationship with Riyadh to traditional lines after four years of cozier ties under Trump.

White House spokeswoman Jen Psaki told reporters on Wednesday Biden would only communicate with the Saudi king and said the declassified Khashoggi report was being readied for release soon.

While Biden restricts his contacts to the king, others in the Biden administration are talking to Saudi officials at various levels.

“We have been in touch with Saudi officials at numerous levels in the early weeks of this administration,” said State Department spokesman Ned Price.

The 59-year old Khashoggi, a Saudi journalist and Washington Post columnist, was lured to the Saudi consulate in Istanbul on Oct. 2, 2018, and killed by a team of operatives linked to the crown prince. They then dismembered his body. His remains have never been found.

Riyadh eventually admitted that Khashoggi was killed in a “rogue” extradition operation gone wrong, but it denied any involvement by the crown prince. Five men given the death penalty for the murder had their sentences commuted to 20 years in jail after being forgiven by Khashoggi’s family.

In 2019, a UN human rights investigator, Agnes Callamard, accused Saudi Arabia of a “deliberate, premeditated execution” of Khashoggi and called for further investigation.

“There is sufficient credible evidence regarding the responsibility of the crown prince demanding further investigation,” Callamard said after the six-month probe.

A classified version of the report was shared with members of Congress in late 2018.

But the Trump administration rejected demands by lawmakers and human rights groups to release a declassified version, seeking to preserve cooperation amid rising tensions with Riyadh’s regional rival, Iran, and promote US arms sales to the kingdom.

Biden’s new director of national intelligence, Avril Haines, committed at her confirmation hearing to complying with a provision in a 2019 defense bill that required the Office of the Director of National Intelligence to release within 30 days a declassified report on Khashoggi’s murder.

Biden pledged during the 2020 presidential campaign to reassess US-Saudi ties in part over Khashoggi’s murder. Since taking office, he has ended sales of offensive arms that Riyadh could use in Yemen and appointed a special envoy to boost diplomatic efforts to end that country’s grueling civil war.