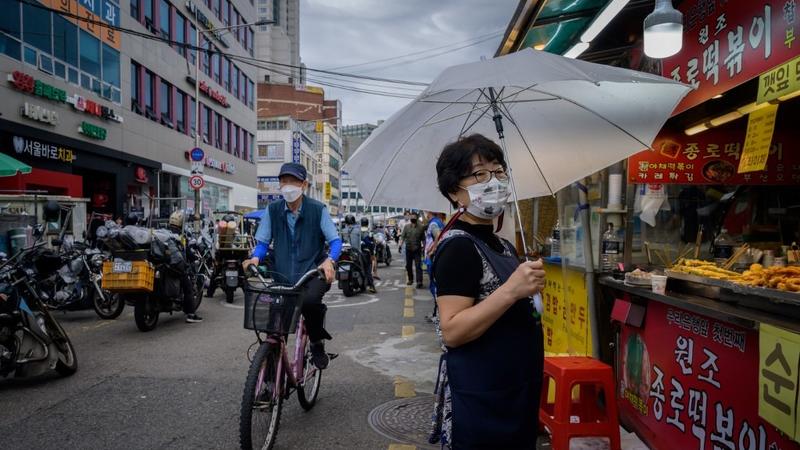 A vendor wearing a face mask holds an umbrella as she stands before a food stall at a market in Seoul on Sept 11, 2020. (PHOTO / AFP)

Meanwhile, 63 people died in the past 24 hours, taking the death toll to 7,249, according to the data shared by the ministry.

A total of 1,342 patients recovered in the last 24 hours, raising the total recoveries to 262,602 in Turkey since the outbreak.

The rate of pneumonia in COVID-19 patients is 7.1 percent and the number of seriously ill patients is 1,351.

The recovery rate from the virus in the Palestinian territories reached 69.8 percent and the death rate remained 0.7 percent, the minister noted, adding that there are 30 cases in critical conditions.

Meanwhile, Palestinian Prime Minister Mohammed Ishtaye said that he instructed the security authorities to tighten procedures and toughen penalties for individuals and institutions that violate the precautionary measures.

Ishtaye made the instructions during a meeting that he chaired for the National Emergency Committee and the leaders of the security services, the WAFA news agency reported.

The meeting discussed measures to reduce the area of the virus spread in light of the steady rise in infections all over the Palestinian territories.

The United Arab Emirates (UAE) on Wednesday announced 842 new COVID-19 cases, bringing the total confirmed cases in the country to 81,782.

And 821 more patients have recovered from the virus, taking the tally of recoveries in the UAE to 71,456, UAE’s Ministry of Health and Prevention said.

It also confirmed one more death, pushing the country’s death toll to 402.

Lebanon’s number of COVID-19 infections increased on Wednesday by 634 to 26,083 while death toll went up by seven to 259, the Health Ministry reported.

The ministry continues conducting PCR tests for people all over the country in an attempt to restrict the further spread of the virus.

Moreover, the spread of the virus in the largest prison in Lebanon prompted some officials and parents of prisoners to urge the government to approve general amnesty.

Families of the prisoners complained against the absence of proper follow-up on COVID-19 patients inside the prison, noting that each room contains tens of prisoners which accelerated the increase in infections.

The total number of COVID-19 infections in Iraq on Wednesday reached 303,059, as health ministry’s officials warned that the upcoming two months will be crucial to the spread of the pandemic.

Abdul Ghani al-Saadi, head of the ministry’s al-Risafa Health Department in eastern Baghdad, told the official al-Sabah newspaper that “the epidemiological situation is still unstable in Iraq and the danger lies within the next two months.”

Al-Saadi highlighted the importance of “preparing for a new wave of the pandemic due to climate fluctuations that are likely to lead to an increase in infections.”

For his part, the ministry’s spokesman Sayf al-Badr said in a press release that most the COVID-19 death cases were those who were too late to be hospitalized.

Singapore’s Ministry of Health (MOH) reported 27 new COVID-19 cases on Wednesday, bringing the total confirmed cases in the country to 57,514.

There are currently 42 confirmed cases who are still in hospital. Of these, most are stable or improving, and none is in critical condition in the intensive care unit.

Furthermore, 490 are isolated and cared for at community facilities. These are those who have mild symptoms, or are clinically well but still test positive for COVID-19.

Meanwhile, 256 more recovered from the virus, bringing the total recoveries to 119,400, while the fatalities remained 208 with no new death reported, according to a ministry statement quoted by QNA.

The ministry reiterated the need to take preventive measures, including staying home and observing social distancing.

Meanwhile, 250 people recovered during the past 24 hours, taking the overall number of recoveries to 84,363, while eight deaths were reported, raising the tally to 805, according to a ministry statement quoted by ONA.

The ministry urged everyone to adhere to social distancing instructions issued by the Supreme Committee and the ministry of health, as well as staying home and avoiding to got out unless necessary.

New Zealand suffered its worst economic slump since the Great Depression in the second quarter as a strict nationwide lockdown to combat the coronavirus brought the country to a standstill.

Gross domestic product plunged 12.2 percent from the first quarter, Statistics New Zealand said Thursday in Wellington. That’s the biggest three-month contraction since quarterly records began in 1977. Economists forecast a 12.5 percent decline. From a year earlier, the economy shrank 12.4 percent, the most recorded in comparable official data dating back to 1955.

New Zealand is going through a sharper but shorter economic shock than it experienced during the depression, when GDP fell 5.3 percent in 1931 and a further 7.1 percent in 1932, according to academic research. Nor is the Covid slump as bad as initially feared. The South Pacific nation succeeded in eliminatingcommunity spread of the virus, allowing it to emerge early from lockdown, and indicators suggest growth surged in the third quarter as consumers went on a spending spree.

It is the highest daily rise since the outbreak of the pandemic in Israel in late February, as the previous record was 4,764 registered on Sept. 14.

The number of death cases reached 1,165, with 18 new deaths, while the number of patients in serious condition rose from 534 to 549, out of 1,163 patients currently hospitalized.

Earlier on Wednesday, the ministry said that Israel has launched an operation to transfer COVID-19 patients between hospitals due to overloads.

According to the ministry, it is no longer possible to admit new COVID-19 patients in hospitals in northern Israel, while hospitals in Jerusalem area also deal with high loads.

Accordingly, the ministry decided to transfer dozens of patients to hospitals in central and southern Israel.

Myanmar reported 73 new cases of COVID-19 with six more deaths on Thursday morning, said a release from the Health and Sports Ministry.

With the newly confirmed cases, the number of the infections rose to 3,894 in the country so far.

Myanmar confirmed its first two cases of COVID-19 on March 23 and first death on March 31.

Meanwhile, a total of 908 patients have recovered from the disease.

New Zealand confirmed seven new cases of COVID-19 on Thursday, all detected in recent returnees in a managed isolation facility.

With the exception of one arrival from Uzbekistan, all new cases were detected as a result of day 3 testing and are now in quarantine, said the Ministry of Health.

There are no new community cases.

There are four people hospitalized with COVID-19, with no cases in ICU, said a ministry statement.

With Thursday’s new cases and nine additional recovered cases, the total number of active cases in New Zealand is 77. Of those, 33 are imported cases in managed isolation facilities, and 44 are community cases, it said.

During the past 24 hours, a record 97,894 new cases were reported from across the country, and 1,132 new deaths were recorded, bringing the death toll to 83,198, according to the ministry.

According to ministry officials, 4,025,079 people have been discharged from hospitals after showing improvement.

“The number of active cases in the country right now is 1,009,976,” the information released by the ministry reads.