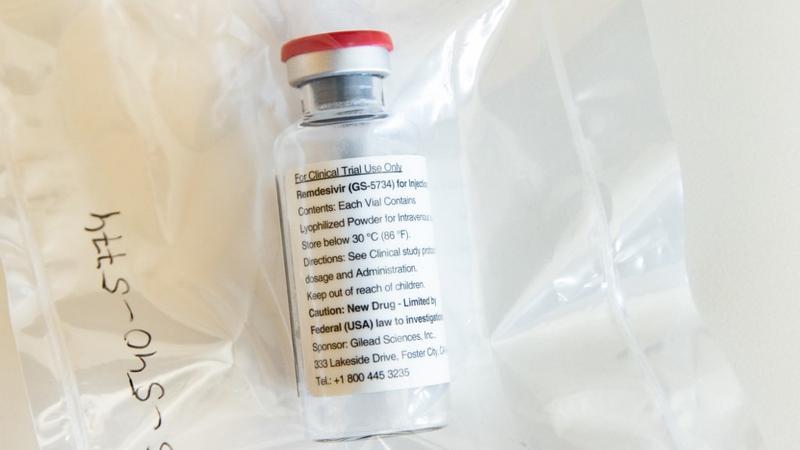 This file photo taken on April 8, 2020 shows one vial of the drug remdesivir during a press conference about the start of a study in particularly severely ill patients at the University Hospital Eppendorf (UKE) in Hamburg, northern Germany, amidst the COVID-19 pandemic.
(ULRICH PERREY / POOL / AFP)

“Patients who are eligible for remdesivir are limited to severe patients with pneumonia and in need of oxygen therapy,” the Korea Centers for Disease Control and Prevention (KCDC) said in a statement.

It did not disclose how many doses have been donated by the US firm.

Gilead said on Monday it has priced remdesivir at US$390 per vial in the United States and other developed countries and agreed to send nearly all of its supply of the drug to the United States over the next three months.

South Korea reported 51 more cases of the COVID-19 compared to 24 hours ago as of 0:00 am Wednesday local time, raising the total number of infections to 12,850.

READ MORE: Japan will not yet invoke emergency despite spike in cases

The Association of Southeast Asian Nations (ASEAN) and Australia on Tuesday vowed to work with the World Health Organization (WHO) and relevant agencies to enhance collective response to the COVID-19 pandemic, according to a Cambodian foreign ministry’s press statement.

The statement was released after the special ASEAN-Australia foreign ministers’ meeting on COVID-19 via video conference.

“The meeting agreed to work with relevant international organisations, especially the World Health Organization (WHO), and the global community to enhance collective pandemic preparedness and response and to prevent its long-term impacts,” it said.

New South Wales, Australia’s most-populous state, said residents of 10 virus hotspots in neighboring Victoria would face six months in jail or a fine of A$11,000 if they attempt to cross the border.

The 10 areas of Melbourne go into lockdown shortly before midnight as authorities attempt to crush a spike in coronavirus infections.

Iran has taken “effective steps” in producing a vaccine for novel coronavirus disease, Iran’s Minister of Health and Medical Education Saeed Namaki said, as the country reported 2,457 new infections and 147 new deaths over the past 24 hours Tuesday.

“The results are very much promising. Tests in animal model were successful. Clinical trials on human will be carried out soon,” said Namaki.

Meanwhile, Iran will reintroduce lockdown measures on one of its busiest port cities on the Persian Gulf following a surge in cases.

Meanwhile, Iraqi Higher Committee for Health and National Safety called on senior students in all medicine colleges across Iraq to volunteer to help the medical workers in fighting the pandemic.e past 24 hours, taking the death toll to 5,131, the minister tweeted. The total number of recoveries rose to 173,111 after 1,302 new recoveries were added.

Israel on Tuesday registered 803 new COVID-19 cases, the highest single-day surge so far, raising the tally to 25,244, the state’s Ministry of Health said.

The death toll from the virus rose from 319 to 320, while the number of patients in serious condition increased to 52 from 43, out of 232 patients currently hospitalized, the ministry said.

The Japanese government is considering starting talks with China and South Korea as soon as this month to ease travel restrictions imposed to prevent the spread of coronavirus, Asahi reports, citing unidentified government officials.

Japan plans to prioritize business travelers and then open borders to students, while tourists will be the last to be allowed entry, the report says.

Kuwait started on Tuesday the second phase of restoring normal life, which will last three weeks.

During the phase, public and private sectors will resume work with less than 30 percent capacity, in addition to the resumption of operation in shopping malls, financial sector, construction sector, retail shops, parks, and pick-ups from restaurants and cafes. 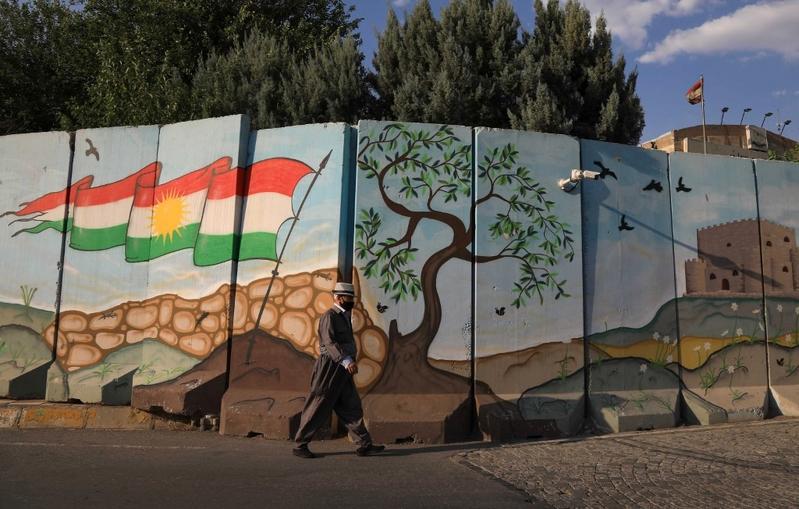 A mask-clad man walks in the vicinity of Arbil Citadel in the capital of the northern Iraqi Kurdish autonomous region amid a lockdown to combat the spread of COVID-19 coronavirus, on June 30, 2020. (SAFIN HAMED / AFP)

Lebanon’s number of COVID-19 infections increased by 33 to 1,778, while the death toll remained unchanged at 34.

Lebanese Health Ministry said that all passengers must register on its website before taking a PCR test for COVID-19 at the airport and spending several days in quarantine after arrival.

Oman reported 1,010 new COVID-19 cases, bringing the total number of coronavirus infections in the country to 40,070.

The tally of recoveries in Oman rose to 23,425 after 1,003 more patients recovered from the virus, while the death toll climbed to 176 after seven more deaths were confirmed.

Palestine on Tuesday announced 322 new COVID-19 cases in the West Bank, bringing the total number of coronavirus infections to 2,765.

The Palestinian Health Ministry announced that the death toll climbed to 10 after two more fatalities were added.

Meanwhile, 1,394 people recovered from the virus, bringing the total number of recoveries to 81,564, while the death toll remained unchanged at 113.

Saudi Arabia, which has the highest daily coronavirus infections in the past month, reported 4,387 new COVID-19 cases, raising the tally of the confirmed cases to 190,823.

Singapore has controlled the spread of the coronavirus and kept fatality rates low, the country’s Prime Minister Lee Hsien Loong says in a letter posted to his Facebook page.

“We fought hard over the past few months to manage the health crisis,” says Lee, speaking in his capacity as secretary-general of the People’s Action Party. “Thanks to the efforts of our healthcareprofessionals and your cooperation, we have controlled the spread of the virus and kept fatality rates low.”

UAE’s Ministry of Health and Prevention said that 490 more patients fully recovered from the virus, taking the tally of the recoveries to 37,566. It also confirmed one more death, raising the country’s death toll to 315.

The total number of COVID-19 cases in Yemen’s government-controlled provinces increased to 1,158 on Tuesday, as 30 new cases were confirmed. The death toll rose to 312, while the number of recoveries increased to 488.