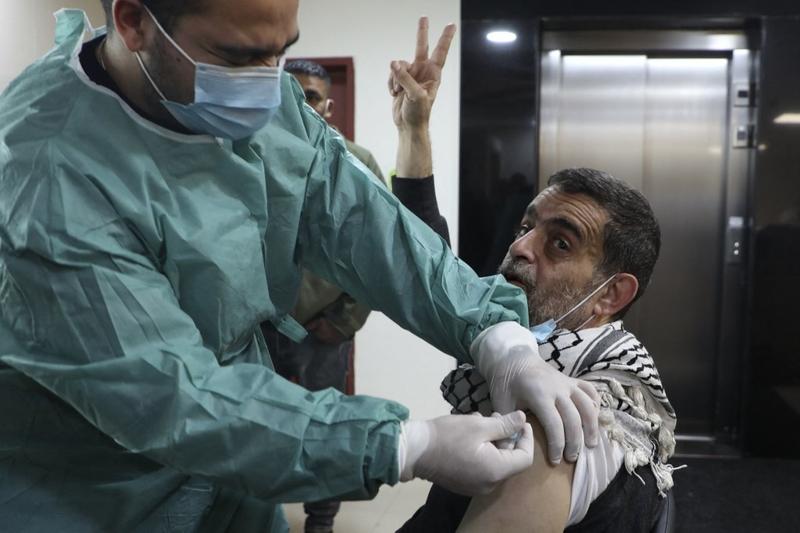 A Palestinian health worker gets vaccinated against COVID-19 at the Palestine Red Crescent hospital in the West Bank city of Nablus, on Feb 4, 2021. (JAAFAR ASHTIYEH / AFP)

Israel, a world leader in terms of vaccination speed, could perhaps consider donating surplus doses to the Palestinians to help accelerate a vaccine roll-out in the occupied West Bank and Gaza, the bank said.

“In order to ensure there is an effective vaccination campaign, Palestinian and Israeli authorities should coordinate in the financing, purchase and distribution of safe and effective COVID-19 vaccines,” it said.

Cost estimates suggest that “a total of about US$55 million would be needed to cover 60 percent of the population, of which there is an existing gap of US$30 million,” the World Bank said, calling for additional donor help.

Australia on Monday began its mass COVID-19 vaccine programme with frontline healthcare staff and senior citizens getting the first doses as the country looked set to report no local cases for the third straight day.

A group of 20 that included Prime Minister Scott Morrison on Sunday received the first shots of the vaccine while the broader rollout started Monday morning with authorities expected to administer more than 60,000 doses by the end of the week.

The vaccine, jointly developed by Pfizer Inc and Germany’s BioNTech, will be rolled out in the initial weeks while AstraZeneca’s first batch is expected to reach the country in the next two weeks.

A total of 20,000 doses of Russia’s Sputnik V coronavirus vaccines, funded by the United Arab Emirates (UAE), arrived in the Gaza Strip on Sunday through the Rafah border crossing.

“Today, we have received the shipment of COVID-19 vaccines funded by the UAE,” Ghazi Hamad, undersecretary of the Hamas-run ministry of social development, told reporters at the border crossing between Gaza and Egypt.

Hamad added that the UAE will send more doses of coronavirus vaccines to the Gaza Strip in the near future. 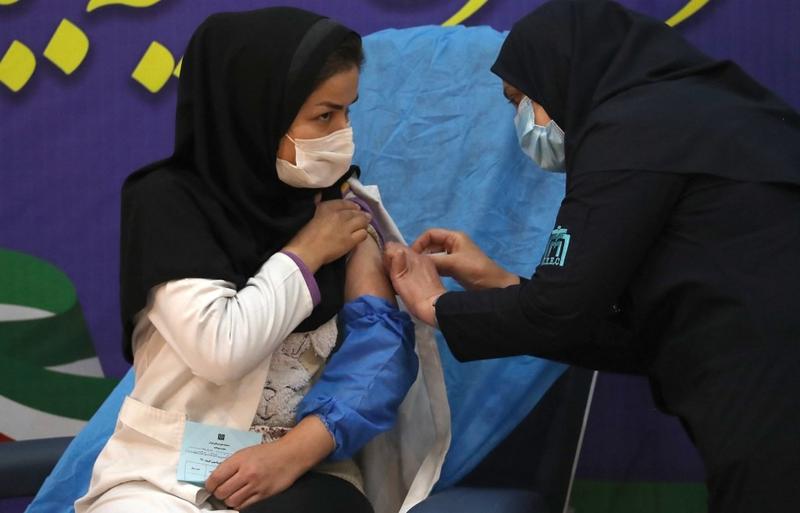 An Iranian health worker receives a dose of the COVID-19 vaccine as the country launches its inoculation campain, at the Imam Khomeini hospital in the capital Tehran, on Feb 9, 2021. (ATTA KENARE / AFP)

Iranian health authorities warned on Sunday about the worsening of the COVID-19 pandemic in the southwestern province of Khuzestan, as an increasing number of people are infected with the mutated coronavirus variant found in Britain and other countries.

The Shapur University of Medical Sciences in Ahvaz, capital city of Khuzestan, has made a request for a two-week lockdown of the province over the surge, official news agency IRNA reported Sunday.

Earlier in the day, Sima Sadat Lari, spokeswoman for Iran’s Health and Medical Education Ministry, said 7,931 new COVID-19 cases were reported in the past 24 hours, of which 574 required hospitalization, according to the ministry’s official website.

Israel’s Ministry of Health reported 3,452 new COVID-19 cases on Sunday, raising the total confirmed tally in the country to 747,965.

The death toll from the COVID-19 in Israel reached 5,563 after 37 new fatalities were added, while the number of patients in serious condition decreased from 872 to 858, out of 1,394 hospitalized patients.

Jordanian Prime Minister Bisher al-Khasawneh warned on Sunday that the country is at a critical stage in the fight against the COVID-19 pandemic as the situation is worsening.

During his remarks at the Lower House, Khasawneh said the government will continue to pursue balance between public health and the economy, and preserving the health of all is always the priority.

Jordan reported 3,917 new COVID-19 cases on Sunday, the highest daily record in more than two months, raising the total number in the kingdom to 363,728.

Jordan also reported 11 more deaths from the virus, increasing the death toll from to 4,554.

Kuwait reported on Sunday 768 new COVID-19 cases, bringing the total number of confirmed cases in the country to 184,090.

The tally of recoveries in Kuwait rose by 967 to 172,227, while 10,819 coronavirus-related patients were receiving treatment, it said.

On Saturday, Kuwait’s Directorate General of Civil Aviation (DGCA) decided to extend a ban on entry of non-Kuwaiti travelers to the country until further notice. 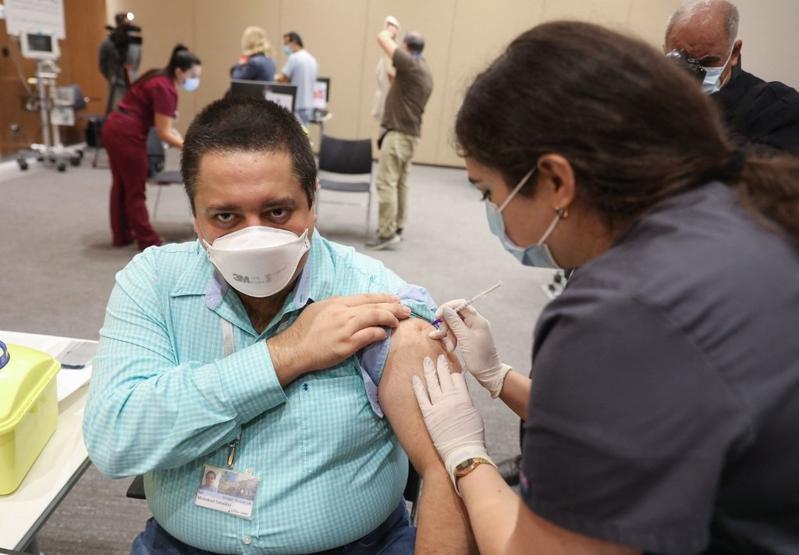 A medic administers a dose of the COVID-19 Pfizer/BioNTech vaccine at Lebanon’s American University Medical Center in the capital Beirut, on Feb 14, 2021. (ANWAR AMRO / AFP)

Lebanon registered on Sunday 1,685 new COVID-19 cases, raising the total number in the country to 355,056, the Health Ministry said.

Meanwhile, 569 people recovered during the past 72 hours, taking the overall recoveries to 130,653, while three deaths were reported, pushing the tally at 1,552, according to a ministry statement quoted by ONA.

Meanwhile, 480 more recovered from the virus, bringing the overall recoveries to 150,220, while the fatalities remained 256, according to a ministry statement quoted by QNA.

Turkey on Sunday reported 6,546 new COVID-19 cases, including 601 symptomatic patients, taking the total number of positive cases in the country to 2,638,422.

The rate of pneumonia in COVID-19 patients in Turkey stands at 3.6 percent and the number of seriously ill patients was 1,185, said the ministry.