Explosion in northern town, which caused damage but no injuries, comes after riots over lockdown measures.

Dutch police say a coronavirus testing centre in the northern Netherlands was intentionally targeted, after an explosion at the site.

The blast in Bovenkarspel early on Wednesday morning shattered windows but caused no injuries, police from the province of North Holland said in a statement.

The explosive “must have been placed” there, police spokesman Menno Hartenberg told Reuters news agency.

Hartenberg said that “something metal” had caused the blast.

“We don’t know yet exactly what exploded, the explosives experts must first investigate,” he added.

She said there was one security guard inside the building when the blast took place, but the individual was unharmed. 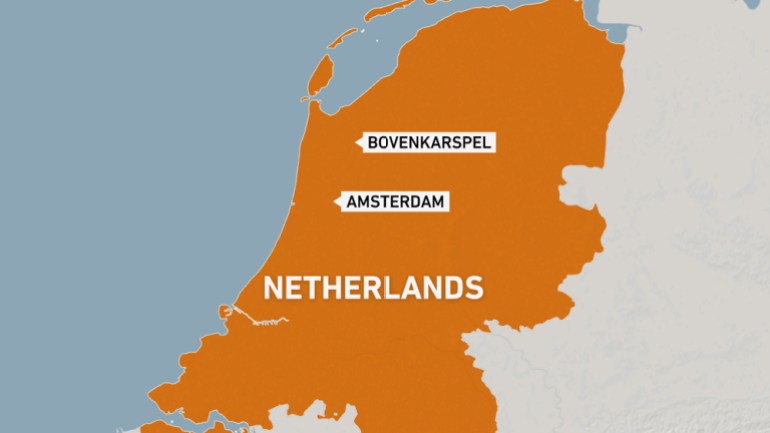 Officers have cordoned off the area as they carry out investigations, public broadcaster NOS reported.

All Wednesday morning test appointments in Bovenkarspel have also been cancelled, according to NOS.

The region around Bovenkarspel is currently suffering one of the Netherlands’ worst COVID-19 outbreaks, with 181 cases per 100,000 inhabitants, compared with around 27 per 100,000 nationally.

At least one hospital has been forced to send patients to other provinces due to lack of space in its intensive care units.

“In this area, the infections are really going up, there is a real serious outbreak and the hospitals here are really struggling,” Al Jazeera’s Vaessen said.

“And also generally in the Netherlands infections are on the rise, the reproduction figure [of the virus] has gone up above one now,” she added, citing the threshold at which the spread of the virus accelerates and can threaten an exponential growth of cases.

The blast follows the worst unrest the Netherlands has witnessed in decades, with many angered by strict restrictions aimed at containing the COVID-19 pandemic.

Earlier this year, the government introduced a night-time curfew, the first to be implemented in the Netherlands since World War II.

The measure went into effect on January 23 and led to several days of rioting.

Police clamped down and hundreds of rioters were arrested. Many have already been sentenced by Dutch courts.

The curfew is in effect from 9pm to 4:30am daily, and is due to expire on March 15 – two days before general elections.

Prime Minister Mark Rutte’s government won a court case last week over its use of emergency powers to install the measure.

The curfew is part of a strict lockdown in which bars, restaurants and non-essential shops have been closed for months.

Wednesday witnessed the first easing of lockdown measures in several months, with hairdressers reopening and non-essential stores allowed to accept a small number of visitors by appointment.