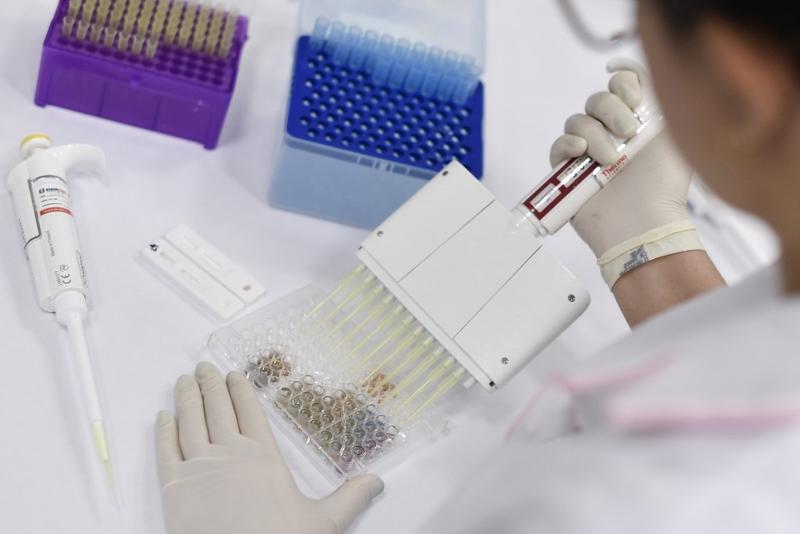 (FILES) In this file photo taken on March 26, 2020 a researcher works on the diagnosis of suspected coronavirus COVID-19 cases in Belo Horizonte, state of Minas Gerais, Brazil, on March 26, 2020. (DOUGLAS MAGNO / AFP)

BRASILIA, Brazil－The Brazilian government says it has reached an agreement with Oxford University and the pharmaceutical company AstraZeneca to produce a promising coronavirus vaccine that is undergoing tests.

The Brazilian govt said the first to get the Oxford shot would be high-risk groups such as the elderly, people with comorbidities and health and security professionals

Brazilian Health Ministry authorities said at a news conference that the country will pay US$127 million and receive material to produce 30.4 million doses in two batches in December and January, which would allow it to quickly start inoculation efforts if the vaccine is certified to be safe and effective.

The total deal is for 100 million vaccines for a country with a population of about 210 million, they said. It will be produced by a local vaccine maker, Fiocruz.

Vijay Rangarajan, the British ambassador, said on Twitter that “the 30 million doses will be available in Brazil” and Fiocruz will “prepare for local production”, without making reference to the promised additional 70 million doses.

The British embassy said in a statement that “the 70 million will come in a second moment”, but gave no further details.

Fiocruz said it still had to reach a deal with AstraZeneca for the transfer of technology of the vaccine if it works.

“After the production (of the shots), it will still be necessary (to follow) phases of registry and validation before a possible distribution.”

It may be responsible for producing the vaccine for the rest of Latin America, it said.

First to get a shot

The Brazilian government said the first to get the Oxford shot would be high-risk groups such as the elderly, people with comorbidities and health and security professionals.

“This country has extensive experience in extremely fast vaccination”, he said.

British researchers started testing the experimental shot in May, aiming to immunize more than 10,000 people, including older people and children. The vaccine is one of about a dozen in the early stages of human testing.

Brazil, where coronavirus infections are still on the rise, counts more than 1 million confirmed cases and more than 55,900 fatalities.

READ MORE: WHO drawing up plans for ‘fair, equitable’ access to virus vaccine

The British ambassador said on Tuesday that the vaccine maker has the capacity to produce 2 billion doses in its first batch, which is expected by the end of the year, but said that much of the global production had already been bought.