Children wear ventilation masks against the spread of the COVID-19 pandemic at a park in Bogota on Oct 9, 2020. (PHOTO / AFP)

TRIPOLI / BRUSSELS  / LJUBLJANA – The Colombian Ministry of Health and Social Protection announced on Saturday that the country had reached 1,007,711 cases of the novel coronavirus (COVID-19), while the death toll rose to 30,000.

The ministry reported that in the last 24 hours, 8,769 new cases of the disease were reported, most of them in the Colombian capital of Bogota with 2,531 cases, in the department of Antioquia with 1,864 cases, and in the Valle del Cauca region with 631.

Additionally, 198 patients died from the disease in the last 24 hours.

US Vice-President Mike Pence’s chief of staff, Marc Short, has tested positive for coronavirus along with at least one other key adviser, raising the prospect of another outbreak within the White House less than two weeks before the election.

Pence has tested negative and will continue to campaign for US President Donald Trump’s re-election, according to a statement from the vice-president’s office announcing Short’s diagnosis. It said Pence was considered “essential personnel” under Centers for Disease Control and Prevention guidelines.

Short is Pence’s top aide, a constant presence at his side who frequently acts as a spokesman for the vice-president. In the statement, Pence’s office acknowledged that he’s considered a close contact of Short under infection tracing procedures.

Pence traveled to Florida to deliver a campaign speech in Tallahassee on Saturday evening after learning of Short’s diagnosis, according to people familiar with the matter. Short, who tested positive earlier in the day, did not accompany him.

Pence is scheduled to campaign on Sunday in Kinston, North Carolina.

The US is now experiencing yet another surge of infections, with new cases exceeding 83,000 on Friday, a record. About 8.6 million Americans have contracted the virus so far and more than 225,000 have died. 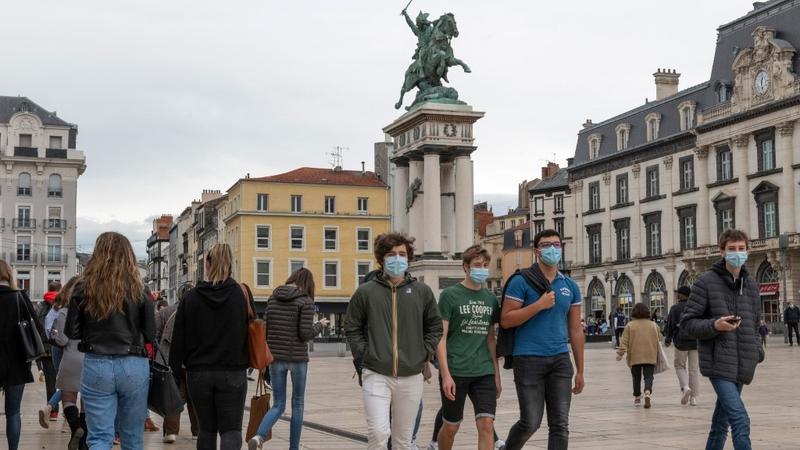 Europe became the second region after Latin America to surpass 250,000 deaths on Saturday, according to a Reuters tally, with record numbers of daily COVID-19 infections reported in the past two weeks.

Europe reported 200,000 daily infections for the first time on Thursday, as many Southern European countries this week reported their highest number of cases in a single day.

The United Kingdom, Italy, France, Russia, Belgium and Spain account for nearly two-thirds of about 250,000 deaths registered until now from a total of about 8 million cases across Europe.

The United Kingdom leads Europe’s death toll with about 45,000 deaths, followed by Italy, Spain, France and Russia. Prime Minister Boris Johnson said on Thursday Britain cannot rely on a vaccine and will need to use other measures to slow the pandemic.

Based on last seven-days daily reported average deaths, Russia is reporting 250 deaths per day, Europe’s highest toll, followed by the United Kingdom and France with about 143 deaths each.

France became the seventh country to report more than 1 million coronavirus cases on Friday. It has been one of the countries hardest hit in the second wave and has imposed curfews across much of the nation.

The average number of COVID-19 deaths reported each day in France has been increasing for 10 days straight, according to Reuters analysis.

Spain recently crossed 1 million cases and is reporting 136 fatalities on the latest seven-day average of reported deaths. Its death rate of about 7.38 per 10,000 people is the highest in Europe and second highest in the world after Peru.

The global coronavirus tally stands at about 42.1 million cases and 1.1 million deaths, according to a Reuters tally.

While health services have not so far been overwhelmed to the extent they were in the first wave, medical authorities have warned of a likely surge in demand for intensive care beds as colder weather forces more people indoors and infections spread.

The Minister-President of the Brussels Capital Region Rudi Vervoort announced on Saturday more drastic measures will be implemented to fight against COVID-19 at a meeting with 19 mayors of the region of Brussels.

A curfew has been extended from 10 pm to 6 am Cinemas, theatres, museums, cultural centers and exhibition venues will be closed. Sports halls will also be closed, and the wearing of masks will remain compulsory throughout the Brussels region. These new measures will come into force on Oct. 26.

Meanwhile, the governments of Wallonia and the Wallonia-Brussels Federation implemented a partial lockdown on Friday. The government of Wallonia has entrusted the governors of the five provinces of Wallonia with the task of enforcing a curfew from 10 p.m. to 6 a.m. until Nov. 19.

The figures on the epidemiological situation in Belgium are still increasing. In the seven-day period (from Oct. 14 to 20), an average of 11,201 new infections per day were reported on Saturday by the public health institute Sciensano. A daily average of 37.1 deaths was also reported by Sciensano during the period.

Slovenia has registered a record 1,961 COVID-19 cases in the past 24 hours, taking the national tally to 21,277, according to official figures released on Saturday.

The country also reported 19 deaths in the past day, bringing the death toll to 235.

The 14-day COVID-19 incidence in Slovenia is now 621 cases per 100,000 inhabitants. There are currently 13,024 active cases. Hospitalizations have gone up to 449, with 63 patients in intensive care, showed data from the official COVID-19 tracker site.

Milan Krek, the director of the National Institute for Public Health (NIJZ), told local media that the high figures do not come unexpected, while Bojana Beovic, the head of the government’s COVID-19 task force, said they would climb higher.

Meanwhile, the Slovenian Foreign Ministry said Foreign Minister Anze Logar had tested positive for the novel coronavirus in a routine test on Friday. The minister, it said, is not displaying any COVID-19 symptoms.

As of Saturday, more non-essential shops were closed to slow down the spread of the virus. The country had already introduced wide-ranging restrictions, including a 9 pm-6 am curfew, an inter-regional movement ban, limited gatherings, remote education for most children, the closure of restaurants and bars and the mandatory use of masks outdoors.

The National Center for Disease Control of Libya on Saturday reported 990 new COVID-19 cases, bringing the national count to 54,374 with 29,965 recoveries and 790 deaths.

The center received a total of 1,910 suspected samples in the past 24 hours, of which 990 were tested positive, it said in a statement, adding that 16 more deaths were reported.

Libyan authorities have taken a series of measures against the pandemic since the first case was reported in March, including closing the country’s borders, shutting down schools and mosques, banning public gatherings and imposing a curfew.

Brazil reported another 432 deaths from the novel coronavirus (COVID-19) in the last 24 hours, bringing the total number of deaths to 156,903, the government announced on Saturday.

Costa Rica’s Ministry of Health reported on Saturday the deaths of 17 more people from the novel coronavirus (COVID-19), bringing the death toll to 1,282.

The country reached 103,088 cases of COVID-19 on Saturday, with 1,262 new infections reported in the last 24 hours; 246 were detected through epidemiological tracing and 1,016 through laboratory tests.

As of Saturday, 504 people were hospitalized, 201 of them in intensive care, with an age range of one to 93.

Greece on Saturday reported another 935 COVID-19 cases in the last 24 hours, a new daily record.

The previous daily record of 882 cases was registered on Thursday.

The total number of cases since the outbreak of the pandemic in Greece has now reached 29,992, according to the latest count by the National Public Health Organization.

Five COVID-19 related deaths were reported on Saturday, bringing the death toll in the country to 564. Meanwhile, 91 people were treated in intensive care units.

Morocco announced on Saturday 4,045 new COVID-19 cases, taking the tally in the North African country since March 2 to 194,461.

The number of recoveries from the coronavirus increased to 160,372 after 3,197 more were added, while the death toll rose by 50 to 3,255, the health ministry said in a statement.

The COVID-19 fatality rate in Morocco stands at 1.7 percent while the recovery rate is 82.5 percent.

Canada reported a total of 213,881 COVID-19 cases and 9,922 deaths as of Saturday afternoon as the resurgence of COVID-19 activity continued in the country, according to CTV.

Chief Public Health Officer of Canada Tam Theresa said on Saturday that outbreaks continued to contribute to COVID-19 spread in Canada and the number of people experiencing severe illness continued to increase.

“These vary in size from just a few cases to larger clusters occurring in a range of settings including long term care and assisted living facilities, schools, congregate living settings, industrial work settings and large social gatherings,” Tam said in a statement.

On Saturday morning, Ontario province announced 978 news cases of COVID-19, breaking another grim record for the most infections in a single day. Its previous record was 939 cases announced on Oct. 9.

Quebec province announced on Saturday that 1,009 more people had tested positive for COVID-19, bringing the total number of cases to 99,235 since the start of the pandemic.

Another 23,012 people in Britain have tested positive for COVID-19, bringing the total number of coronavirus cases in the country to 854,010, according to official figures released Saturday.

The coronavirus-related deaths in Britain rose by 174 to 44,745, the data showed.

According to the British Office for National Statistics (ONS), the highest COVID-19 infection rates continue to be seen in the North West, Yorkshire and The Humber and the North East while the biggest increase was detected in older teenagers and young adults.

Official figures showed Friday that Britain’s coronavirus reproduction number, also known as the R number, has fallen slightly, but the virus is still spreading fast in the country.

Portugal registered 3,669 new coronavirus cases on Saturday, a new record of infections in a single day, bringing the total to 116,109 in the country since the beginning of the pandemic.

According to the epidemiological bulletin of the Directorate-General for Health (DGS), there were 21 more deaths related to COVID-19, raising the death toll to 2,297.

The number of hospital admissions reached 1,455, with 221 patients in intensive care units.

Portuguese Prime Minister Antonio Costa said that the “state of calamity” is the necessary tool at this moment to control the spread of the pandemic.

The number of confirmed cases in the African continent has reached 1,696,286, the Africa Centers for Disease Control and Prevention (Africa CDC) said on Saturday.

The continental disease control and prevention agency said in a statement that the death toll related to the pandemic now stood at 40,922 as of Saturday afternoon.

A total of 1,394,094 people infected with COVID-19 have recovered across the continent, the Africa CDC said.

The most affected African countries in terms of the number of positive cases include South Africa, Egypt, Morocco, Ethiopia and Nigeria.

The Southern Africa region is the most COVID-19 affected region both in terms of the number of confirmed positive cases as well as the number of deaths.

The Northern Africa region is the second most COVID-19-affected African region, according to the Africa CDC.

Mexico reported 6,025 new Covid-19 cases, bringing the total to 886,800 according to data released by the Health Ministry Saturday night.

Deaths rose by 431 to 88,743. Among them was Mexico Senator Joel Molina of the state of Tlaxcala, El Financiero newspaper reported.

Italy is considering its strongest restrictions yet since its national lockdown and could ask citizens not to leave their towns as cases continue to rise. New infections rose to 19,644 cases Saturday, again setting a record. Patients in intensive care units rose to 1,128.

The government is expected to approve further virus containment measures as soon as Sunday and is considering additional economic support even as the threat of tighter restrictions prompts protests.

Meanwhile, 229 new deaths were reported, taking the nationwide count to 26,050.

So far, over 57.3 million tests have been conducted across the country.