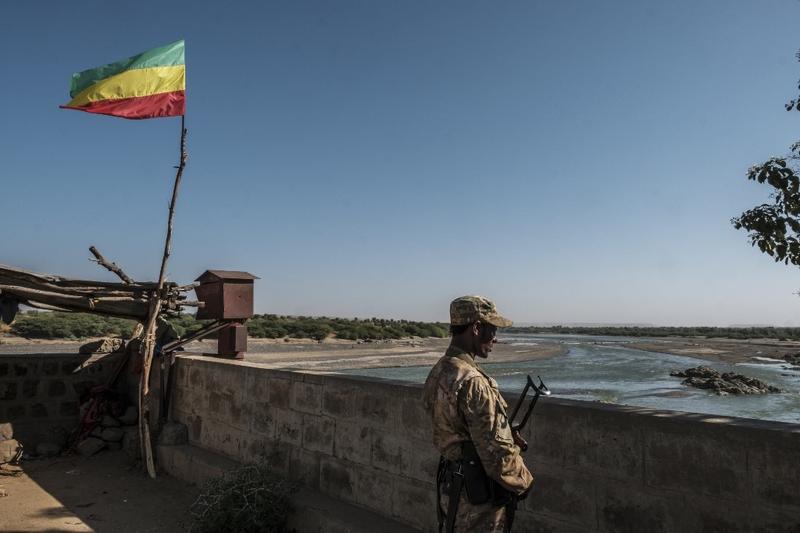 A member of the Amhara Special Forces watches on at the border crossing with Eritrea where an Imperial Ethiopian flag waves, in Humera, Ethiopia, on Nov 22, 2020. (EDUARDO SOTERAS / AFP)

ADDIS ABABA / NAIROBI – Tigrayan forces said on Tuesday they had destroyed an Ethiopian army division in battles to control the northern region where a three-week-old war has killed hundreds and spread global alarm.

The federal government denied that and said many Tigrayan soldiers were surrendering in line with a 72-hour ultimatum before a threatened attack on the regional capital Mekelle.

Prime Minister Abiy Ahmed’s troops launched an offensive against the Tigray People’s Liberation Front (TPLF) local government on Nov 4 and say they are closing in on Mekelle in a final push to win the conflict.

But the battle-hardened TPLF say their troops are keeping the federal army at bay and scoring some big victories.

Their spokesman Getachew Reda told Tigray TV a prestigious army unit – which he termed the 21st mechanized division – had been “completely destroyed” in an assault at Raya-Wahirat led by a former commander of that unit now fighting for the TPLF.

Billene Seyoum, the prime minister’s spokeswoman, told Reuters that was not true.

Reuters has been unable to verify statements made by either side since phone and internet connections to Tigray are down and access to the area is strictly controlled. 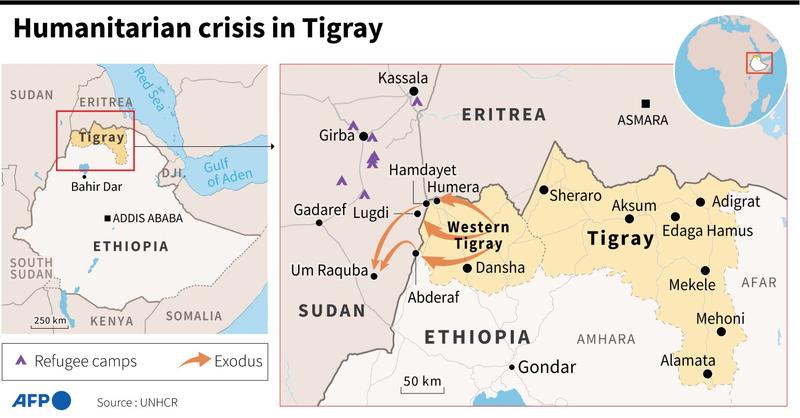 Hundreds have died, tens of thousands of refugees have fled to Sudan and there is widespread destruction and uprooting of people from homes, security and aid sources say.

The conflict has spread to Eritrea, where the TPLF has fired rockets, and also affected Somalia where Ethiopia has disarmed several hundred Tigrayans in a peacekeeping force fighting al Qaeda-linked militants.

The United States, which regards Ethiopia as a powerful ally in a turbulent region, became the latest nation to call for peace, saying it supported African Union (AU) mediation efforts “to end this tragic conflict now”.

Abiy, who won the Nobel Peace Prize last year for ending a standoff with Eritrea, has said he will not negotiate with the TPLF though he does plan to receive AU envoys.

He has given Tigrayan forces until Wednesday to surrender or face an assault on the highland city of Mekelle, home to about half a million people.

A government taskforce said large numbers of Tigrayan militia and special forces had surrendered and it asked others still with the TPLF to disarm wherever they were.

TPLF leader Debretsion Gebremichael has disputed the government version that Mekelle is encircled at a roughly 50 kilometers distance and told Reuters the ultimatum, which ends on Wednesday, was a cover for government forces to regroup after defeats.

The US embassy in Eritrea’s capital Asmara, where TPLF rockets have fallen near the airport, issued an alert saying it had reports that neighborhood wardens advised residents to remain indoors at the instruction of local officials.

“All US Citizens in Asmara are advised to continue to exercise caution, remain in their homes, and conduct only essential travel until further notice,” the embassy said.

Abiy, whose parents are from the larger Oromo and Amhara groups, denies any ethnic overtones to his offensive against the TPLF, saying he is pursuing criminals who have revolted against the federal government and ambushed a military base.

The TPLF says he wants to subdue Tigray to amass more personal power. Since taking office in 2018, the prime minister has removed many Tigrayans from positions in government and the security forces and arrested some on charges of corruption and human rights abuses, even though he was their former military comrade and coalition partner.