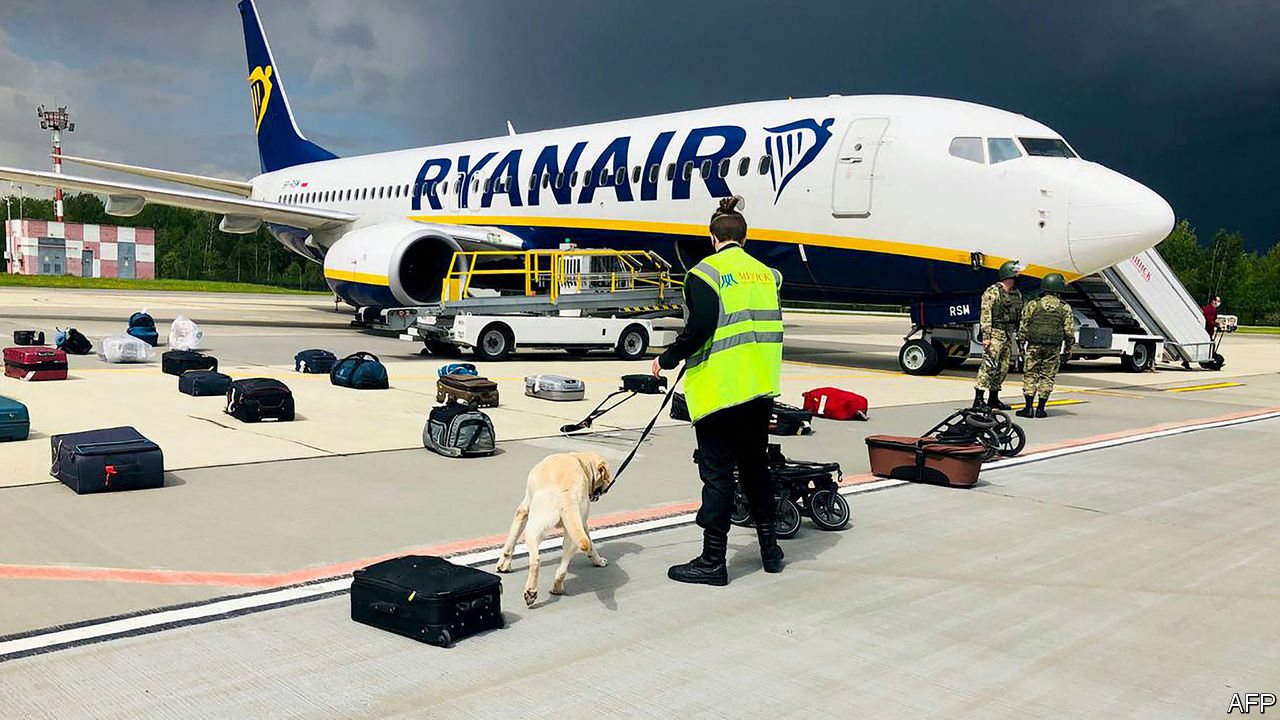 WESTERN STATESMEN have been competing with each other to express their horror and fury at what was tantamount to an act of piracy perpetrated by Belarus’s president, Alexander Lukashenko, on May 23rd. Antony Blinken, America’s secretary of state, “strongly condemns” the “shocking act”, in which Mr Lukashenko forced a Ryanair passenger plane to make an unscheduled stop in his capital in order to arrest Roman Protasevich, the co-founder and former editor of an internet channel, NEXTA. Poland’s prime minister, Mateusz Morawiecki, called it an “unprecedented act of state terrorism”. NATO branded the incident “serious and dangerous”. Ursula von der Leyen, president of the European Commission, tweeted: “The outrageous and illegal behaviour of the regime in Belarus will have consequences.”

What those consequences might be is under discussion at a meeting in Brussels on Monday evening of the European Council. Three Baltic states said that Belarus’s airspace should be declared “unsafe” and that the EU should close its own airspace to Belarusian flights. Already, earlier that day Britain had closed its airports to Belavia, Belarus’s national airline, and said its aviation regulator would ask airlines to avoid the country’s airspace.

Belarus has its own version of events, which it claims justifies its actions. But Angela Merkel, Germany’s chancellor has called it “completely implausible”. That Mr Protasevich was soon afterwards shown in a video, saying he was being well treated, and confessing to “plotting riots”, will have done little to convince the regime’s critics.

Citing what it said was evidence that there were explosives on board, the authorities forced the aircraft to land in Minsk as it passed through Belarusian airspace on its way to neighbouring Lithuania from Greece, sending a MiG fighter plane to escort the Ryanair jet down. The state news agency later reported that no explosives had been found. And it seems the plane had almost reached the Lithuanian border when it was turned around, and then had a much longer journey to Minsk than it would have had to Vilnius—making a mockery of the claim that the action was intended to deal with a bomb threat. It seems certain that the incident was invented purely as a way of arresting the journalist.

Mr Protasevich, who is 26, and Sofia Sapega, his Russian girlfriend, who was also arrested during the forced stopover in Minsk, have meanwhile been propelled to international fame, with world leaders calling for their release. NEXTA, which Mr Protasevich ran from Warsaw, has long been a thorn in the president’s side. Initially on YouTube and subsequently on Telegram, an encrypted mobile-phone app, the site has since 2015 been a vehicle for criticism and mockery of the autocrat.

But it was only last summer that its popularity exploded. In August Mr Lukashenko was announced as the winner of an election in which he had barred several popular candidates from running. Svetlana Tikhanovskaya, the wife of one of the blocked candidates, ran instead of her husband, and most observers believe that she actually won the election by a healthy margin. However, the official results gave Mr Lukashenko 80% of the vote in what was his sixth consecutive election victory. Ms Tikhanovskaya was subsequently deported to Lithuania, and now lives in Vilnius.

After huge protests broke out in Minsk and other cities, the authorities launched a campaign of beatings and arrests which has continued to this day—although the number of people taking to the streets has since dwindled as a result of intimidation. NEXTA and Telegram played a crucial role in organising the protests and disseminating videos of police brutality. At one point NEXTA’s subscriber base was said to cover a fifth of the entire population of Belarus. Mr Protasevich was placed on a terrorist watchlist by Mr Lukashenko’s security forces, but must have considered himself safe in exile. As an alleged terrorist he potentially now faces the death penalty in Belarus.

Belarus is already subject to EU sanctions for the brutality with which it has treated protesters; these take the form of asset freezes and travel bans on a list of 88 named people, including Mr Lukashenko himself, and a number of state-owned entities. America has a similar, but shorter list.

For all the fury, designing tougher sanctions that will have a real effect will be difficult. It is possible that more airlines may seek to avoid Belarusian airspace, but this will increase journey times and cost. Moreover, Western countries may be reluctant to push Belarus into an even tighter embrace with Russia, where Vladimir Putin continues to support his fellow autocrat. And Russia can easily render Western economic sanctions ineffective, supplying Belarus with cash and commodities, and handling its meagre exports. Even before resorting to state terrorism, Belarus was already a pariah, without much to lose.

Editor’s note (May 24th 2021): This article has been updated since it was first published.