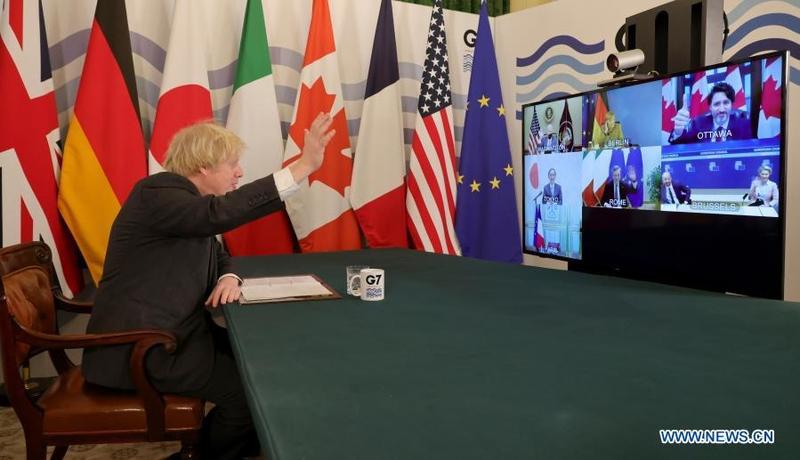 British Prime Minister Boris Johnson speaks during a virtual meeting of the leaders of the Group of Seven at Downing Street in London, Britain, on Feb 19, 2021.  (ANDREW PARSONS / NO 10 DOWNING STREET / HO VIA XINHUA)

LONDON – The leaders of the Group of Seven (G7) on Friday pledged to cooperate with the Group of 20 (G20) and other international institutions on a range of global issues including fighting coronavirus pandemic, climate change and upholding the rules-based multilateral trading system, sending signals that the G7 will be committed to multilateral cooperation.

“We, the leaders of the Group of Seven, met today and resolved to work together to beat COVID-19 and build back better,” said a joint statement released after the virtual meeting of the leaders chaired by British Prime Minister Boris Johnson, whose country holds the G7 presidency this year.

We will work together and with others to make 2021 a turning point for multilateralism and to shape a recovery that promotes the health and prosperity of our people and planet.

“We will work together and with others to make 2021 a turning point for multilateralism and to shape a recovery that promotes the health and prosperity of our people and planet,” according to the statement.

It was the first meeting of the group since April 2020 and US President Joe Biden’s first multilateral call since taking office in January. Britain will host the first in-person G7 summit in almost two years in June in the Carbis Bay, Cornwall, a seaside resort in southwestern England.

The leaders affirmed that they will intensify cooperation on the health response to COVID-19, support the “leading and coordinating role” of the World Health Organization (WHO) while accelerating global vaccine development and deployment.

“We reaffirm our support for all pillars of the Access to COVID-19 Tools Accelerator (ACT-A), its COVAX facility, and affordable and equitable access to vaccines, therapeutics and diagnostics, reflecting the role of extensive immunisation as a global public good, the statement said. “Today, with increased financial commitments of over US$4 billion to ACT-A and COVAX, collective G7 support totals US$7.5 billion.”

“We invite all partners, including the G20 and International Financial Institutions, to join us in increasing support to ACT-A, including to increase developing countries’ access to WHO-approved vaccines through the COVAX facility,” said the statement.

Early this month, China, a member of G20, has announced its decision to provide 10 million COVID-19 vaccine doses to COVAX to meet the urgent needs of developing countries. The country has vowed to make joint efforts to turn COVID-19 vaccines into global public goods and promote the accessibility and affordability of vaccines in developing countries.

On economic recovery, the G7 leaders reaffirm their support to the most vulnerable countries, their commitment to the Sustainable Development Goals, and their partnership with Africa, including to support a resilient recovery.

“We will work through the G20 and with the International Financial Institutions to strengthen support for countries’ responses by exploring all available tools, including through full and transparent implementation of the Debt Service Suspension Initiative and the Common Framework,” according to the statement.

Meanwhile, the leaders pledged further efforts to curb the impact of climate change ahead of the next UN Climate Change Conference (COP26) in Glasgow, Scotland, in November and the 15th meeting of the Conference of the Parties to the Convention on Biological Diversity (COP15) to be held in May in Kunming, China.

“Looking to UNFCCC COP26 and CBD COP15, we will put our global ambitions on climate change and the reversal of biodiversity loss at the centre of our plans. We will make progress on mitigation, adaptation and finance in accordance with the Paris Agreement and deliver a green transformation and clean energy transitions that cut emissions and create good jobs on a path to net zero no later than 2050,” said the statement.

Meanwhile, the leaders stated that they will be committed to upholding open economies and cooperate on a freer and fairer rules-based multilateral trading system.

“We will champion open economies and societies; promote global economic resilience; harness the digital economy with data free flow with trust; cooperate on a modernised, freer and fairer rules-based multilateral trading system that reflects our values and delivers balanced growth with a reformed World Trade Organisation at its centre.”

“With the aim of supporting a fair and mutually beneficial global economic system for all people, we will engage with others, especially G20 countries including large economies such as China,” they said.

ALSO READ: World welcomes US return to 2015 Paris climate accord

The leaders reaffirmed that these will be priorities at the G7 Summit in the Britain in June.

The G7 summit will be held in Cornwall on June 11-13. Australia, India and South Korea are invited as guest countries.

The G7 gathers Canada, France, Germany, Italy, Japan, the United Kingdom and the United States. The European Union is an invitee to the G7.