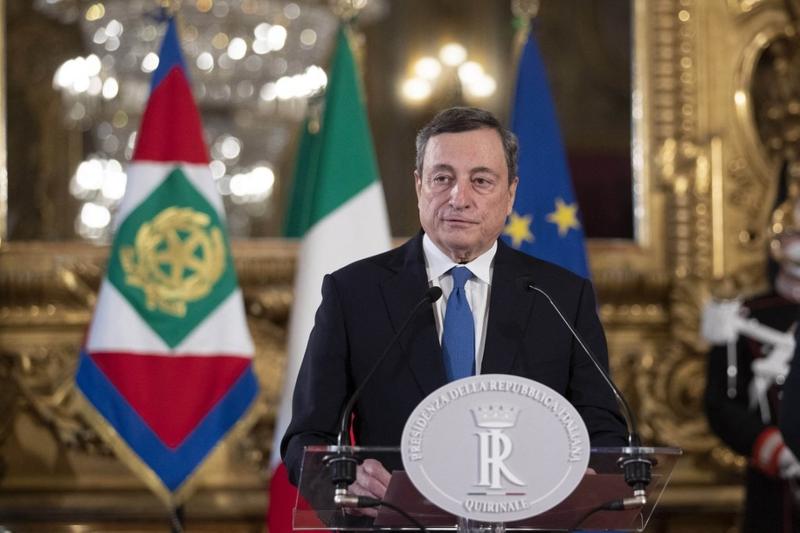 Former head of the BCE (European Central Bank) Mario Draghi gives a press conference after a meeting with the Italian president, at the Quirinal palace in Rome, on Feb 3, 2021. (ALESSANDRA TARANTINO / POOL / AFP)

ROME – Members of Italy’s 5-Star Movement voted on Thursday to back Prime Minister designate Mario Draghi, opening the way for the former European Central Bank chief to take office at the head of a broad government of national unity.

In an online ballot, 59.3 percent of 5-Star supporters heeded a call from party leaders to support the new administration, despite the fact it includes some of their arch foes and will be headed by the sort of technocrat they have previously decried.

After coalition infighting brought down the last government, President Sergio Mattarella called on Draghi, one of the most respected institutional figures in Italy, to form a new cabinet to tackle the coronavirus health crisis and economic meltdown.

Having secured the endorsement of almost all Italy’s political parties, Draghi is likely to present his list of ministers to Mattarella on Friday and unveil his policy programme next week in parliament.

Confidence votes in both houses enabling him to take office will be a formality. However some lawmakers from the 5-Star, which was born in 2009 as an anti-system, anti-euro party, have threatened to oppose Draghi regardless of the online ballot.

In a sign of the divisions, one of its leading lights, Alessandro Di Battista, announced he would quit the group. “My political conscience can’t take it anymore,” he said on Facebook.

The movement’s members held similar online votes before forming coalitions first with the rightist League in 2018 and then with the centre-left Democratic Party in 2019. The size of victory on those two occasions was 94 percent and 79 percent respectively.

While Thursday’s margin was far narrower, the result is still a boost for Draghi and means no single party will have the power to bring down his administration.

The 5-Star leadership had urged members to vote yes, saying the group had to help lead the economic recovery in Italy, which expects to receive more than 200 billion euros (US$242.56 billion) from a European Union fund to revive its battered economy.

“In one of the most dramatic moments in our recent history, the 5-Star Movement has chosen the path of courage … but above all it has chosen the European path,” Luigi Di Maio, foreign minister and a top 5-Star politician said on Facebook.

Draghi, 73, is widely credited with having saved the euro currency during his time in charge of the ECB and he will no doubt be influential now in shaping EU debate on how the bloc should engineer its economic revival.

He has told politicians this week that he is opposed to fiscal austerity, despite soaring national debt levels, saying it was important to protect social cohesion.

Draghi also reportedly promised to create a powerful ministry for ecological transition, a move that helped win over support from 5-Star for whom environmentalism is a core concern.

Policies to fight climate change are required to be a pillar of the Recovery Plans to be presented by EU countries to the European Commission by April.

Draghi has also said he will make the anti-coronavirus vaccine programme a priority. Italy has registered almost 93,000 deaths linked to COVID-19 since its outbreak emerged in February last year, the second-highest toll in Europe.