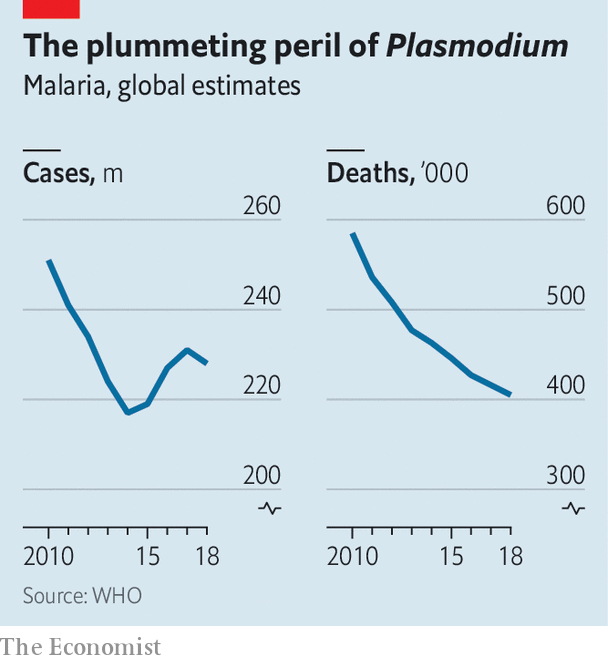 SINCE COVID-19 hit Kenya, Margaret Wanja has accumulated six grandchildren and great-grandchildren. She lives in Thiba, a rice-growing village. Her new brood are all evacuees from Nairobi, the Kenyan capital. Many city-dwellers believe it is safer to send their children to rural relatives. Others hope to save money. The pandemic has destroyed jobs and closed schools, where poor children are often given a free lunch. Dispatching kids to the countryside, where it is easier to live off the land, means fewer mouths to feed.

Yet there are hidden dangers. The irrigation ditches in Thiba’s paddy fields breed mosquitoes, which transmit malarial parasites from human bloodstream to human bloodstream. So even if there is less coronavirus here than in a city, it is far more dangerous for children. Worldwide, 400,000 people died of malaria in 2018, two-thirds of them children under five. Very few children die of covid-19.

To prevent mosquito bites, governments hand out insecticide-treated bednets. Kenya does it every three years; and was scheduled to do it in April. Alas, covid-19 scotched that plan. Kenya was under curfew, movement was restricted and health workers were on pandemic duty.

Belatedly, as the insecticide on Kenyans’ old bednets loses its potency, the government is trying again. On October 24th hundreds of volunteers began a household census in Mwea, the electoral district that includes Thiba, in preparation for a pilot programme handing out 60,000 nets with social distancing. Instead of rolling up with a truckload and letting villagers crowd around to receive one, workers will have multiple distribution points and staggered pickup times. Getting nets to all 15m Kenyans who live in malarial regions will take ages. There is no chance it will be done before the rainy (ie, malarial) season ends in late November.

As covid-19 started to spread around the world in March, malaria-watchers fretted. Supply chains for drugs and insecticide were bound to be disrupted. Pandemic-induced poverty was bound to make people more vulnerable. “All the alarm bells started ringing,” says Pedro Alonso of the World Health Organisation (WHO). In April a WHO study predicted that, in a worst-case scenario, the malarial death toll would nearly double in 2020, to 769,000.

Governments and donors were jolted into action. Supply chains were indeed disrupted, but firms found workarounds, and health workers found ways to fight malaria while avoiding spreading covid-19. Some 90% of malaria-prevention efforts are now back on track, says the RBM Partnership to End Malaria. The worst-case scenario now seems unlikely to come to pass, though conclusive data are not yet available.

Still, huge challenges remain. The global death toll from malaria was falling before covid-19 struck (see chart). It would be a tragedy if progress stalled, especially since, as Philip Welkhoff of the Bill and Melinda Gates Foundation notes, “Every malaria death is avoidable.”

Governments in rich countries have pushed a consistent message for covid-19. If your children have a fever, keep them at home. “That message would be an unmitigated disaster in countries with high malaria transmission, because a child with a fever can die from malaria in 24 hours,” says Melanie Renshaw of the African Leaders Malaria Alliance, an intergovernmental group. Such a child must quickly be tested for malaria and, if the test is positive, be given anti-malarial drugs. In recent years donors have done a good job of distributing rapid diagnostic tests. These plastic devices look like pregnancy tests, only smaller. They can detect malaria within 15 minutes, with just a drop of blood and no need for a doctor. However, each test can be used only once, so donors have to keep supplying millions of them to African villages.

Some of the difficulties health workers face can be seen at El Miskin camp, near Maiduguri in northern Nigeria. Rows of small square houses of thatch and tarpaulin stretch into the distance. Kids mill around. There’s a hand-washing station at the entrance, but no water or soap.

The people in the camp are among the 2m who have fled from Boko Haram, a slave-owning jihadist group. Because they are poor and their camp is puddle-pocked, they are vulnerable to malaria. At one tarpaulin house Nana, a mother, grinds orange pills in water and presses the cup to her son’s lips. Hussein, who is about four years old, grimaces at the bitter taste. The yucky pills were given to his family as part of a campaign of “seasonal malaria chemoprevention”. In the rainy season, when mosquitoes proliferate, children under five who live in the most malarial areas of Africa are given a prophylactic cocktail of drugs once a month. It cuts the likelihood of each child falling sick by 75%. It has helped Nigeria reduce malaria deaths from 153,000 in 2010 to 95,000 in 2018.

Many locals do not believe in covid-19, or dismiss it as a disease only for rich people who fly in planes. Despite numerous warnings, they crowd hazardously around the health workers who come to the camps. Those health workers must haul around bags of masks and sanitisers. This costs a lot; and the masks create a psychological barrier between health workers and ordinary people, frets Ini Nglass, who leads a WHO malaria team in Borno, the state of which Maiduguri is the capital. Masked people at the door look intimidating. And whereas health workers would normally laugh and play with children before dishing out pills, this year they stand a metre away, their reassuring smiles hidden.

This makes it harder to build trust, and that matters in north-eastern Nigeria, where suspicion is rife. Some 1.2m people are trapped in areas controlled by Boko Haram. The jihadists oppose modernity (though they cheerfully brandish modern weapons). In 2018 they murdered two Red Cross midwives, for supposedly betraying Islam by joining a Western charity.

They make it dangerous to save lives. Yet some health workers manage to distribute anti-malarial drugs. They disguise themselves as villagers, sneak into jihadist territory, stay put for weeks or months and only leave when the work is done. The WHO calls them “trapped health workers”.

When it is too risky to sneak in, they try a different ploy. Boko Haram’s subjects are not allowed to leave permanently. But they can make short trips to market towns, so long as they leave something valuable behind. “[Boko Haram] take their children and tell them, ‘If you don’t come back, we will kill them,’” says a local observer. So health workers station themselves at markets and, with the help of local informants, make contact with the villagers for long enough to slip them anti-malarial pills.

It feels odd to work in the shadows, like heroin dealers, but such tactics are effective. In August Africa was declared free of the wild polio virus, despite the efforts of Boko Haram to thwart vaccination campaigns, which its fighters imagine are a plot to sterilise Muslims.

Some places cannot be reached, alas. Of the 27 local government areas in Borno state, two have been struck off the anti-malarial campaign’s list. They are on the borders with Niger and Chad, which the terrorists cross at will, so they are too dangerous. No one knows how many children will die of malaria because the jihadists think science is sinful.

Most Africans disagree with Boko Haram. In a laboratory in Dakar, Senegal’s capital, technicians analyse the malarial parasites found in people’s blood. Genetic information is fed into computers and crunched. “Before genomics arrived, there were questions without answers,” says Daouda Ndiaye, Senegal’s top malaria expert, based at Cheikh Anta Diop University.

There is a correlation between the number of different parasites found in human blood samples and the prevalence of malaria itself. If only one kind of parasite is found in the samples from a given village, there may be only one source of infection. (The villagers are infecting each other.) Multiple different parasites suggests multiple sources of infection: traders crossing a border, migrant workers coming home and so on. People on buses travel much farther than mosquitoes can fly.

A mix of old and new

Genomics yields precious information. It can show how the disease is being transmitted around the country, and where infection rates are likely to be high. This lets health authorities concentrate resources where they are most needed. It can also show where drug-resistant strains of malaria have popped up, so medics can change the drugs they recommend in those places.

By combining new tools with bednets, pills and spraying, Senegal hopes to eliminate malaria by 2030. Ending it worldwide is further off. The Lancet, a medical journal, said last year that it could be done within a generation, if $6bn a year were spent on prevention instead of $4.3bn. The covid-driven global recession could make it harder to raise such sums.

Anti-malarial campaigns must be sustained. “If you stop holding it down, it goes back up,” says Dr Welkhoff. An Asian species of mosquito, Anopheles stephensi, has found a foothold in Ethiopia and Sudan. Unlike most African species, it thrives in cities, where previously the disease was rare. Since mosquitoes and parasites move and evolve, people must be adaptable. Mosquitoes are being genetically modified to sire offspring that die before they are old enough to start biting. In October the WHO came out in favour of such research. Victory against the vectors is not assured, but nor is it fanciful. ■

Editor’s note: Some of our covid-19 coverage is free for readers of The Economist Today, our daily newsletter. For more stories and our pandemic tracker, see our hub

This article appeared in the Middle East & Africa section of the print edition under the headline “Masked up, ready to battle bugs”