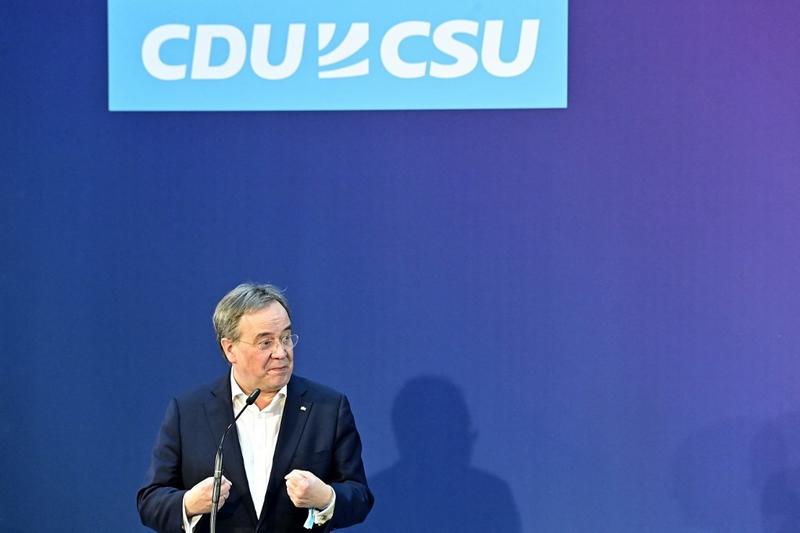 Fresh off a bruising nomination fight, Angela Merkel’s conservative bloc is headed for a tough battle with the Greens to run Germany when the four-term chancellor steps down after the September election.

A poll published just hours after Christian Democratic Union leader Armin Laschet secured the conservative nomination showed the Greens surging ahead to become the most popular party in Germany. The conservatives’ backing – already in decline over missteps in the pandemic – has plunged further as Laschet and Bavarian Premier Markus Soeder fought for the nomination in a mudslinging contest that was unusual in the staid world of German politics.

The Forsa poll for German broadcaster RTL published Tuesday night showed Merkel’s bloc at just 21%, a slump of seven percentage points and their worst result since at least 2013, with the Greens surging five points to 28%

The Greens by contrast named their chancellor candidate, Annalena Baerbock, on Monday in a perfectly choreographed event meant to display party unity.

The Forsa poll for German broadcaster RTL published Tuesday night showed Merkel’s bloc at just 21 percent, a slump of seven percentage points and their worst result since at least 2013, with the Greens surging five points to 28 percent. The Social Democrats scored 13 percent – ahead of the liberal Free Democrats at 12 percent, the far-right Alternative for Germany on 11 percent and the Left party on 7 percent. The euro slipped to the day’s low on the news.

The 60-year-old Laschet enters the campaign just five months before the vote already politically wounded, with the bruising contest between him and Soeder exposing just how many people in his own party doubt Laschet’s ability and laying bare the divisions among conservatives that Merkel’s authority had papered over. Laschet’s efforts to unite conservatives are made all the more difficult by the complicated power-sharing agreement whereby his CDU party shares control at the federal level with Soeder’s Bavarian CSU.

What’s more, Baerbock is the top choice for Germans. While the country doesn’t directly elect the chancellor, people vote for a specific party knowing who will be in charge if the party wins. In the new poll, Baerbock was the candidate of choice for 32 percent of respondents, with Laschet and Social Democrat challenger Olaf Scholz each at 15 percent.

“Everybody knows what’s at stake,” Laschet said Tuesday in Berlin as he gave an early glimpse of his likely campaign strategy, warning that a left-leaning coalition led by the Greens would be “a different republic.” And in another sign of what’s likely to come, Laschet played up his experience running Germany’s most-populous state of North Rhine-Westphalia, while implying that the 40-year-old Baerbock lacks the same know-how because she’s never run a German state or federal ministry. Baerbock in her speech on Monday said she was the candidate of change and that people wanting the status quo had other options.

There’s no hiding the fact that many in the conservative bloc think the Bavarian leader would have made the better candidate. CSU General Secretary Markus Blume called him the “candidate of our hearts” as Soeder made his concession speech Tuesday. The skeptics doubt whether Laschet has the steel to lead the conservatives through potentially the toughest campaign in its history, and some fear he’ll give the Greens an easy ride during the campaign and lose more right-wing voters to the Alternative for Germany.

There’s also concern about the deal he might have struck with Soeder to persuade him to step aside. Soeder is well known for his power moves in Bavaria and CDU officials think that he’ll force their party to accept more proposals from the CSU. Laschet denied on Tuesday that he’d made any commitments to Soeder to secure his backing.

The CDU and CSU “will lead this country into the future, and Markus Soeder will play a central role in that,” Laschet said. “I will continue to consult with him on a daily or weekly basis, or whenever is necessary, and these consultations are always driven by the desire to come to a unified result.”

That Germany’s dominant party wound up in such a mess with just five months to go to polling day reflects its struggle to move past 66-year-old Merkel, who has governed for 16 years and dominated the CDU for a generation. She stayed out of the selection of her successor but congratulated Laschet on his candidacy. After securing the nomination, Laschet told public broadcaster ARD that he knows he has big shoes to fill and expressed his “huge respect” for Merkel.

“I govern a big state, but also know with a certain humbleness what it means to be the chancellor of Germany,” he said.