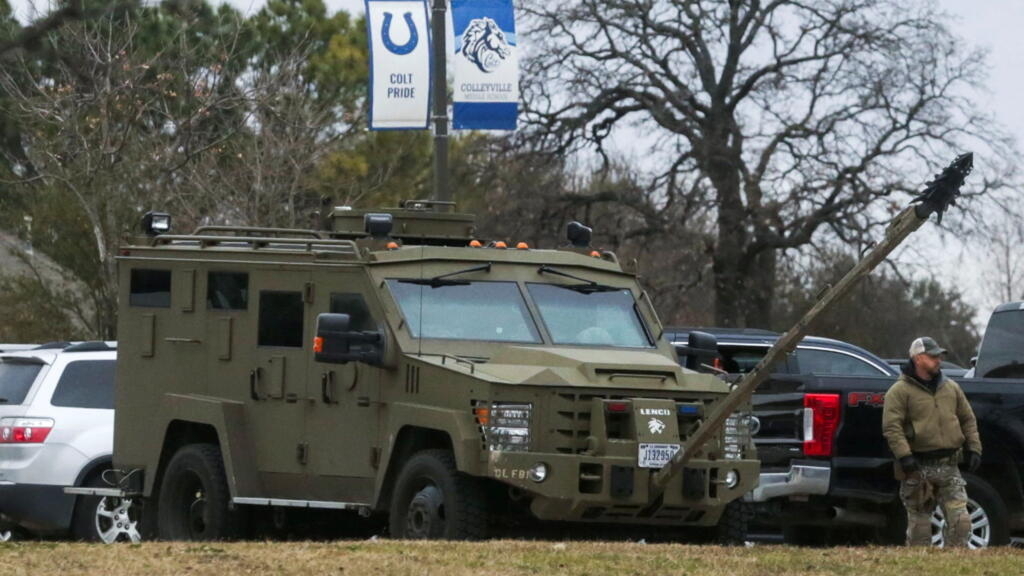 All four people taken hostage in a more than 10-hour standoff at a Texas synagogue have been freed unharmed, police said late Saturday, and their suspected captor is dead.

The siege in the small Texas town of Colleyville – in which the suspect was apparently demanding the release of a convicted terrorist – had sparked an outpouring of concern from Jewish organizations in the United States and the Israeli government.

Colleyville Police Chief Michael Miller told a news conference a “rescue team breached the synagogue” on Saturday evening and rescued three remaining hostages – all adults – being held inside. A first hostage had been released unharmed a few hours earlier.

There were reports from journalists at the scene of a loud explosion and gunshots at the synagogue shortly before the press conference.

That was more than 10 hours after police were alerted to the emergency at the Congregation Beth Israel in Colleyville, about 25 miles (40 kilometers) west of Dallas.

Officers evacuated the synagogue’s surroundings and cordoned off the area, the police said.

ABC News reported that the hostage-taker was armed and had claimed to have bombs in unknown locations. That was not confirmed by police although Miller said that “bomb techs are clearing the scene.”

At about 3am local time (0800 GMT) the police tweeted that it was “now safe for residents who were evacuated to return.”

It is now safe for residents who were evacuated to return to their residences. We know this has been a huge inconvenience and we are appreciative of your patience. #Colleyville


Quoting a US official briefed on the matter, ABC reported the man was demanding the release of Aafia Siddiqui – a Pakistani scientist who in 2010 was sentenced by a New York court to 86 years in prison for the attempted murder of US officers in Afghanistan.

She is currently being held at a prison in Fort Worth, Texas.

DeSarno told the news conference the suspect had been identified, but did not disclose his identity.

The FBI special agent did not confirm the suspect’s demands, but said they were “focused on one issue that was not specifically threatening to the Jewish community” – and that he did not believe there was an ongoing threat.

ABC initially said the man claimed to be Siddiqui’s brother, but later clarified her brother is in Houston – while experts said the word the man used in Arabic was more figurative and meant “sister” in the Islamic faith.

Siddiqui’s lawyer said she “has absolutely no involvement” in the hostage situation in a statement to CNN. The lawyer confirmed that the man was not Siddiqui’s brother and said she condemned his actions.

All hostages are out alive and safe.


DeSarno said police negotiators “had a high frequency and duration of contact with” the hostage-taker.

“There were times when it stopped for periods of time and like many hostage situations, the relationship between the negotiators and hostage-taker had been floating a little bit and sometimes got intense,” he said.

A live stream of the congregation’s Shabbat morning service, available on Facebook for around four hours during the standoff, appeared to capture audio of a man talking loudly – although it did not show the scene inside the building.

He could be heard saying, “You get my sister on the phone,” and “I am gonna die.”

He was also heard saying: “There’s something wrong with America.”

She said the congregation was a “tight” community, and the rabbi in particular was “the best human I think anyone could ever meet.”

But she said it was “not shocking” the crisis occurred in a Jewish community.

“Cases of anti-Semitism have risen lately, but since Jews were first walking the Earth, we have been persecuted,” she said.

President Joe Biden pledged to “stand against anti-Semitism and against the rise of extremism in this country.”

“I am grateful to the tireless work of law enforcement at all levels who acted cooperatively and fearlessly to rescue the hostages,” he said.

Israeli Prime Minister Naftali Bennett tweeted: “This event is a stark reminder that antisemitism is still alive and we must continue to fight it worldwide.

“To the Jewish community in Colleyville and around the world: You are not alone – we stand united with you.”

“No one should ever be afraid to assemble in their place of worship,” the Jewish Community Relations Council said in a statement, while the Council on American-Islamic Relations said it was in contact with Colleyville Jewish leaders to “provide any assistance possible.”