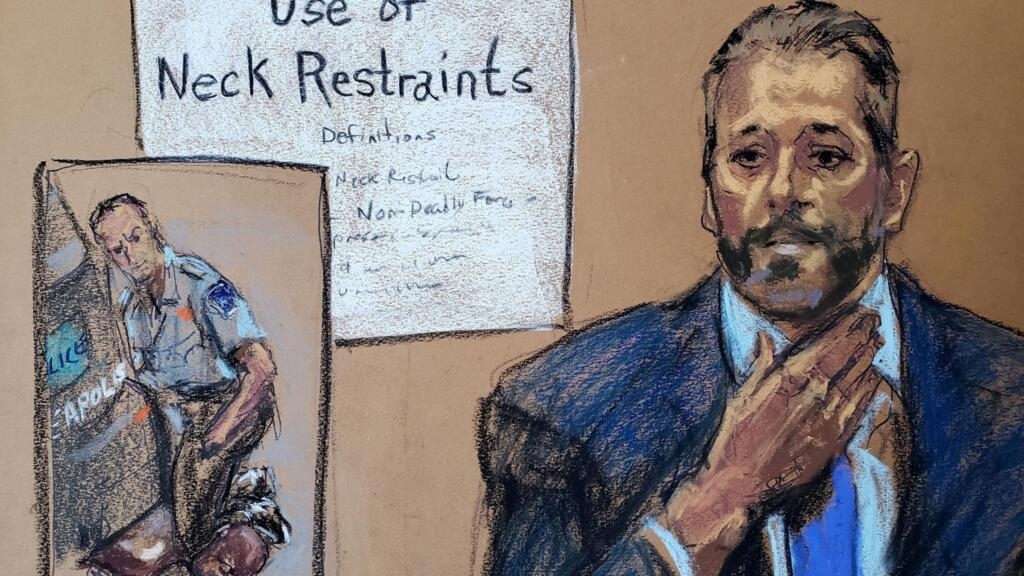 Prosecutors in Derek Chauvin’s murder trial presented a series of witnesses on Tuesday in a bid to show that the former Minneapolis police officer disregarded his training when he knelt on George Floyd’s neck for more than nine minutes.

Lieutenant Johnny Mercil, who teaches the proper use of force for the department, told jurors the neck restraint applied by Chauvin during the deadly arrest of Floyd was unauthorised. Officers are trained to use the least amount of force necessary to subdue a suspect, he said.

During the May 2020 arrest, the handcuffed 46-year-old Black man fell limp and stopped breathing, an incident caught on videos taken by bystanders that millions of people around the world viewed.

The incident prompted protests in cities across the United States and around the world against racism and police brutality.

Chauvin, who is white, has pleaded not guilty to murder and manslaughter charges, arguing that he was following the training he had received in his 19 years on the force.

During Tuesday’s testimony, one of the prosecutors showed Mercil a photograph of Chauvin using his knee to pin Floyd’s neck to the ground and was asked if the officer was using an authorised neck restraint under the circumstances.

“I would say no,” Mercil testified.

Chauvin and three other officers were attempting to arrest Floyd on suspicion of using a fake $20 bill to buy cigarettes at a food store. They were fired the day after the incident.

Mercil testified that officers like Chauvin are trained to use a proportional amount of force and on how to properly use neck restraints, handcuffs and straps.

“If you can use the least amount of force to meet your objectives, it is safer and better,” Mercil testified. “It’s very important to be careful.”

On cross-examination, Mercil agreed with Chauvin’s attorney, Eric Nelson, when asked whether officers must protect themselves when arresting unruly subjects during evolving situations.

“We tell them to stay away from the neck when possible,” Mercil told jurors.

Mercil’s testimony came a day after the Minneapolis police chief testified that Chauvin violated department rules and its ethics code while arresting Floyd.

Prosecutors also called to the stand Jody Stiger, a sergeant in the Los Angeles Police Department who is a use-of-force expert.

Stiger said use-of-force reviews and standards take into account the severity of the offense to which officers are responding and the threats and risks that they may perceive when apprehending a suspect.

Stiger testified he had reviewed the use of force Chauvin employed on Floyd and found it to be “excessive.”

Earlier in the day, two department trainers in crisis intervention and first aid took the stand to describe what they characterized as extensive and continuing training that Minneapolis police officers receive.

Sergeant Ker Yang, a crisis intervention training coordinator, testified that Chauvin completed 40 hours of training on dealing with suspects going through a crisis. He added that police are trained to use neutrality, respect and trust in crisis intervention situations.

“The ultimate goal in action for someone in crisis is to see if that person needs help,” Yang testified.

Before the jury was brought into the courtroom in the morning, Hennepin County District Judge Peter Cahill heard arguments on a request by a friend of Floyd to quash a prosecution subpoena for him to testify.

Morries Hall was in the car with Floyd when police arrived, setting the stage for the attempt to arrest Floyd. Hall has said he would invoke his constitutional right against self-incrimination if he had to appear in the witness stand.

Nelson told Cahill he planned to ask Hall whether he gave Floyd any controlled substances and why Hall left Minnesota immediately after the incident. Floyd’s girlfriend testified last week that she and Floyd struggled with opioid addiction, and that she thought Hall sometimes illegally sold pills to Floyd.

Cahill decided that most questions Nelson wanted to ask could incriminate Hall. Even so, the judge said Hall should be able to testify on Floyd’s condition in the car and whether he fell asleep suddenly after possibly taking opioid pills. Cahill gave Nelson until Thursday to draft potential questions.

The county medical examiner has ruled Floyd’s death a homicide at the hands of the police, and noted Floyd had also taken the fentanyl and methamphetamine before his death.

Chauvin’s lawyers argue that Floyd’s death was a drug overdose, although prosecutors have said medical evidence would contradict that.

Hall attended the hearing via a video link from a county jail where he is being held on unrelated charges of domestic abuse, according to court and county jail records.