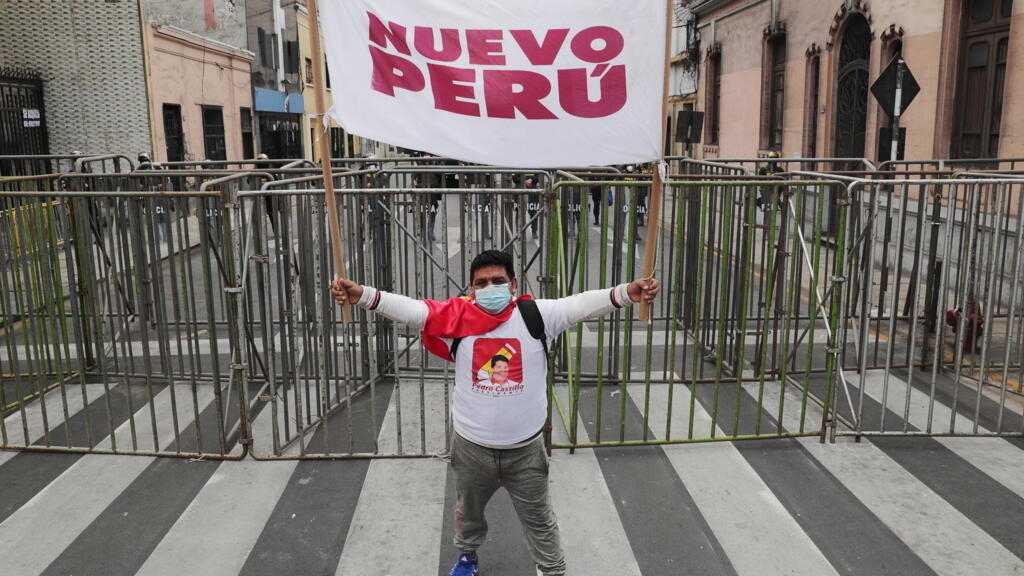 Fujimori had led early counting, but school teacher Castillo gained ground as votes from Peru‘s rural areas – his stronghold – came in from across a country battered by years of political turmoil.

“There is a clear intention to boycott the popular will,” said Fujimori, the daughter of the imprisoned former president Alberto Fujimori. At a press conference, she showed videos and photographs allegedly showing proof of counting irregularities.

Castillo’s Free Peru party called on election authorities to “protect the vote” as ballots are counted and published.

Election observers from the Organization of American States (OAS) said the candidates’ “conduct in these crucial hours is decisive to maintain calm”.

With 94.8 percent of ballots counted, Castillo was narrowly ahead of Fujimori with 50.2 percent compared to her 49.7 percent, though there could still be a long wait for the final outcome.

Whoever wins the battle between left and right will take leadership of a nation battered by a recession and the world’s highest per capita coronavirus fatality rate with more than 186,000 deaths among its 33 million population.

Castillo caused an upset by topping the first round of voting in April, with Fujimori in second place.

The relatively-unknown teacher was consistently ahead of his rival, though narrowly so, in the latest opinion polls before Sunday’s vote that comes at a crucial time for the country.

Two million Peruvians have lost their jobs during the pandemic and nearly a third now live in poverty, according to official figures.

The candidates have polar-opposite recovery plans.

Favoured by the business sector and middle classes, Fujimori – her bastion the capital Lima – sought to portray Castillo as a communist threat, warning Peru risked becoming a new Venezuela or North Korea.

Rural-based Castillo, in turn, pointed to the Fujimori family’s history of corruption scandals.

Keiko Fujimori is under investigation over campaign funding in her 2011 and 2016 presidential bids.

Apart from corruption charges, her jailed father, 82, has been found guilty of ordering two massacres by death squads in 1991 and 1992 while president.

He is being probed over the forced sterilization of hundreds of thousands of poor, mostly indigenous women during his final four years in power.

“If Keiko is eventually elected, you can’t forget that this 50 percent is not her real support but rather a reaction from an electorate that is afraid of what her opponent represents,” political scientist Jessica Smith told AFP.

Castillo “would be the first poor president of Peru,” added analyst Hugo Otero. The leftist candidate has vowed to forego a presidential salary and live on his teacher’s wages.

Whoever wins will have a hard time governing as Peru’s Congress is fragmented.

Castillo’s Free Peru is the largest single party, just ahead of Fujimori’s Popular Force, but without a majority.

“It won’t be easy (for Fujimori) given the mistrust her name and that of her family generates in many sectors. She’ll have to quickly calm the markets and generate ways to reactivate them,” said Smith.

But if Castillo triumphs, he will have to “consolidate a parliamentary majority that will allow him to deliver his ambitious program”, she said.

In either case, “it will take time to calm the waters because there is fierce polarization and an atmosphere of social conflict”, added analyst Luis Pasaraindico.

At the height of a political storm in November last year, unleashed by more corruption claims, Peru had three different presidents in just five days.