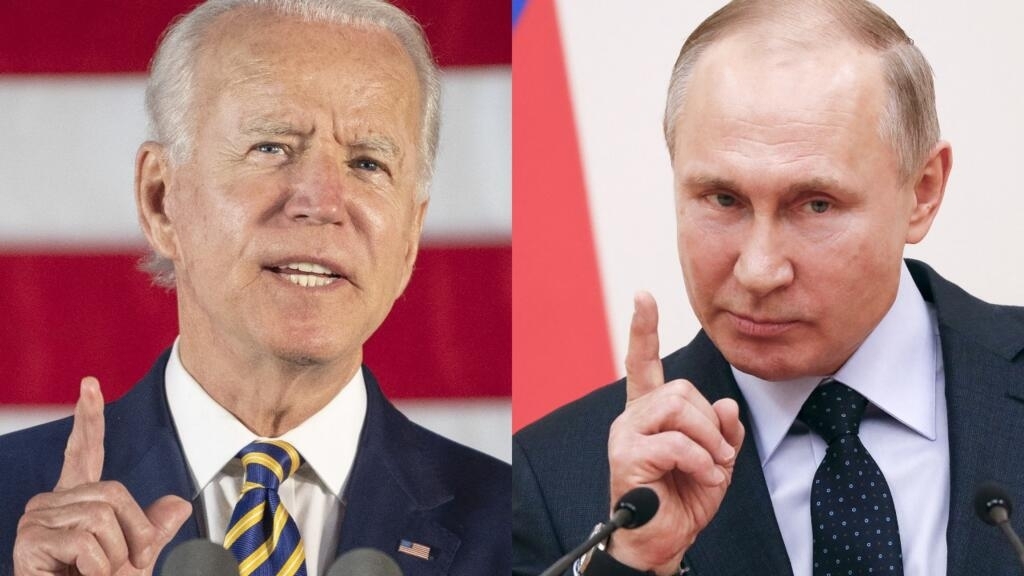 US President Joe Biden and Russian President Vladimir Putin meet June 16 in Geneva for talks that promise to be a fraught amid continuing disputes over allegations of spying, hacking, election meddling, Russian incursions into Ukraine and human rights issues.

US President Joe Biden used the G7 summit in the English seaside resort of Carbis Bay to argue that the world’s richest democracies now faced an existential contest with “autocrats” that would define the 21st Century.

Biden said on Sunday that “autocrat” Vladimir Putin was right to describe UR-Russian relations as being at their lowest point in years, though he suggested that Russia might be weaker than it seemed and that Moscow had overreached in the Middle East.

The US president cast Russia – whose economy is 13 times smaller than the United States – as engaging in unacceptable behaviour on a range of fronts but also pointed to Russia’s own “dilemmas”, including its post-Soviet economic collapse, what he called its overreach in Syria and persistent problems with taming Covid-19 infections.

“Russia has engaged in activities which we believe are contrary to international norms, but they have also bitten off some real problems, that they’re going to have trouble chewing on,” Biden said.

He also said that Putin was right to describe relations as being at a low: “He’s right, it’s a low point.”

Biden said he told Putin before being elected that he would look at whether the Russian leader had been involved in trying to interfere with the US election.

“I checked it out, so I had access to all the intelligence – he was engaged in those activities,” Biden said.

Biden cited Syria as a case in point and an area in which the two powers could work together to find “an accommodation”.

But moderating Russia’s behaviour on the world stage has, in the past, proven difficult.

Asked why Putin, who has led Russia since Boris Yeltsin resigned in 1999, had not changed despite years of Western sanctions, Biden quipped: “He’s Vladimir Putin.”

“Autocrats have enormous power and they don’t have to answer to a public and the fact is that it may very well be if I respond in kind, as I will, that it doesn’t dissuade him – he wants to keep going,” Biden said.

The two former Cold War foes have had a turbulent relationship for years, though relations soured further after Putin sought to rebuild some of the clout lost in the chaotic 1991 Soviet collapse and began meddling far beyond Russia’s borders.

US and other Western leaders now see Putin and Xi Jinping’s China as their main strategic threats, though the Kremlin dismisses the hacking and election-meddling allegations against Russia, saying the West is gripped by anti-Russian hysteria.

The West, for its part, sees Russia as a dictatorial kleptocracy governed by an elite group of Putin cronies that has involved itself in irresponsible international forays such as the 2014 annexation of Crimea, attempts to meddle in US and European elections, and a series of high-profile espionage and assassination attempts abroad.

But there were some signs of a possible agreement in the days ahead of the Geneva talks, with Putin renewing an offer to swap prisoners ahead of his first summit with Biden, who has also come under growing pressure to win the release of Americans from Russian jails.

Asked about a Russian statement that Moscow would be ready to hand over cyber criminals to the United States if Washington followed suit, Biden said that was a good sign and “progress”.

Biden, who early on vowed to take a clear-eyed, tougher approach with Putin than his predecessors, has said he would raise the fate of jailed Americans when he meets the Russian leader in Geneva.

The most prominent US citizens in Russian custody are Paul Whelan, a former security official at an auto parts company who was arrested in December 2018 on charges of espionage, and Trevor Reed, who was arrested in 2019 for a drunken brawl in which he punched two Russian police officers.

Asked in an interview with NBC News broadcast Monday if he was willing to negotiate with Biden on a prisoner swap, Putin said, “Yes, of course” and called for a broader extradition agreement.

Putin said that some of the cases were “matters of a humanitarian nature”.

“Why not discuss them as long as they pertain to the health and life of specific individuals and of their families? Of course. Sure thing,” he said.

Putin also hinted that Reed’s case could be resolved quickly, calling him a “drunk and a troublemaker”.

“These things happen in life. There is nothing horrible about it. It happens to our men as well,” Putin said.

Putin has also specifically raised the case of contract pilot Konstantin Yaroshenko, saying he was also accused of “common crime” and that he has “major health issues” ignored by prison authorities.

Yaroshenko was convicted in 2011 of smuggling drugs into the United States. He was extradited from Liberia in what the Kremlin denounced as a kidnapping.

Other high-profile Russians in US custody include Viktor Bout, the prolific arms dealer arrested in Thailand in 2010 who inspired the Nicolas Cage character in the film “Lord of War.”

He is serving a 25-year sentence on charges of smuggling weapons to Colombia’s FARC rebels.