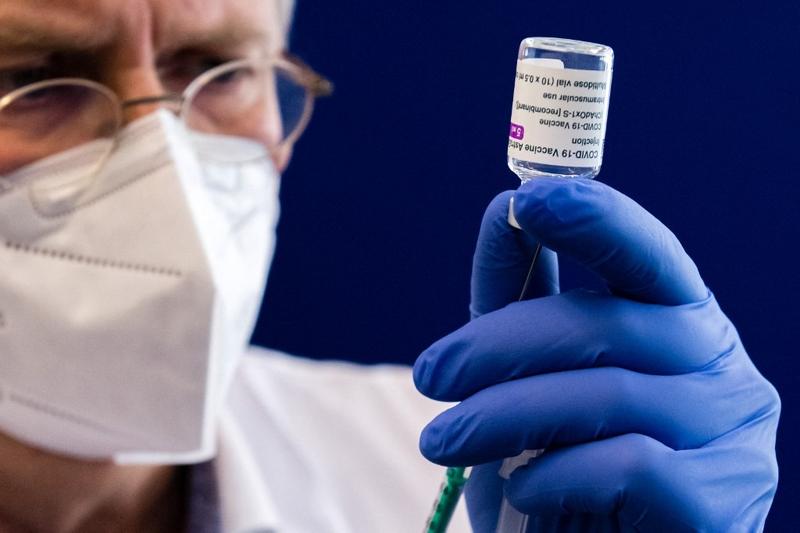 A healthcare worker fills a syringe with the AstraZeneca COVID-19 vaccine at the university hospital in Halle/Saale, eastern Germany, on Feb 12, 2021, at the start of the inoculation with the vaccine at the hospital. (JENS SCHLUETER / AFP)

MILAN / SANTIAGO / GENEVA / ALGIERS / SAO PAULO / HAVANA / QUITO / ADDIS ABABA / PARIS / MEXICO CITY / RABAT / MADRID / LISBON / LONDON / MOSCOW – The University of Oxford has launched a study to assess the safety and immune response of the COVID-19 vaccine it has developed with AstraZeneca Plc in children for the first time, it said on Saturday.

The new mid-stage trial will determine whether the vaccine is effective on people between the ages of 6 and 17, according to an emailed statement from the university.

Around 300 volunteers will be enrolled and first inoculations are expected this month, Oxford said.

The two-dose Oxford/AstraZeneca vaccine has been hailed as a ‘vaccine for the world’ because it is cheaper and easier to distribute than some rivals.

Europe’s medicines regulator is planning to speed up assessments of any COVID-19 vaccines that are modified to protect against variants of the virus, the head of the agency’s COVID-19 task-force told Reuters on Friday.

Marco Cavaleri, chair of the vaccine evaluation team at the European Medicines Agency (EMA), said there should be no need for lengthy large-scale trials like those needed to evaluate the first COVID-19 vaccines, since tweaks for new variants can be tested on smaller groups.

“We are working on updated guidelines, assuming that we cannot ask for large Phase III trials. This will allow us to go faster,” said Cavaleri.

Drugmakers including Pfizer, Moderna and AstraZeneca have been testing their COVID-19 vaccines against several fast-spreading, more infectious variants of the novel coronavirus.

Variants which emerged in Brazil (known as P.1.), Britain (known as 20I/501Y.V1 or B.1.1.7) and South Africa (known as 20I/501Y.V2 or B.1.351) have already spread around the world, piling more pressure on governments struggling to tame the pandemic which has killed almost 2.5 million people.

These are the three major variants that are worrying scientists, with their spread raising the risk that newly-developed COVID-19 vaccines will need to be updated or tweaked to be effective against some variants, and that people may require one or more booster shots.

World Health Organization (WHO) Director-General Dr Tedros Adhanom Ghebreyesus said here on Friday that although the number of reported COVID-19 cases has declined globally for the fourth week in a row, “now is not the time for any country to relax measures or for any individual to let down their guard.”

According to the WHO chief, the decline in reported COVID-19 cases appears to be to the result of countries implementing public health measures more stringently.

The death toll from the virus in Algeria rose to 2,932 after two new fatalities were added, said the Algerian Ministry of Health in a statement. 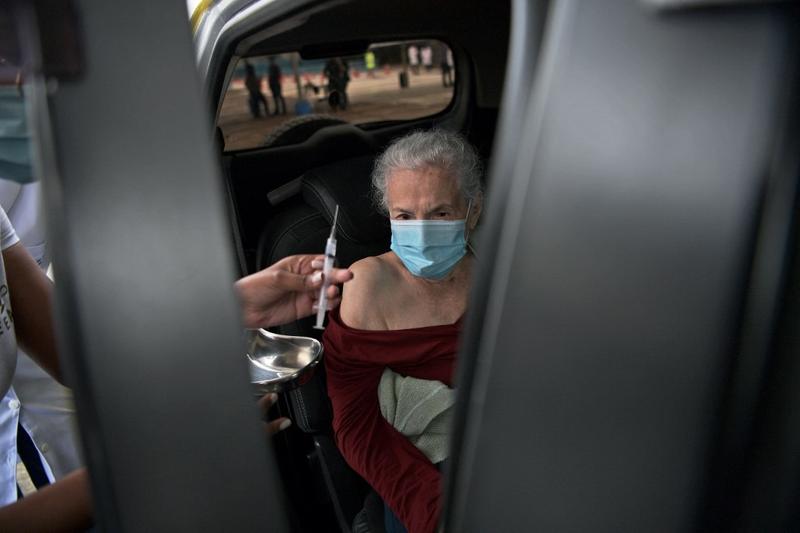 In this Feb 06, 2021, a Brazilian elderly woman receives a dose of the Coronavac vaccine at a drive through vaccination center at the Sambodrome Rio Carnival venue, in Rio de Janeiro, Brazil. (CARL DE SOUZA / AFP)

Brazilian cities including Rio de Janeiro risk halting vaccinations as the supply of shots runs out and prospects for the delivery of new doses remain murky.

On the eve of Carnival, local authorities are begging people stay home to avoid an explosion of cases. Festivities were canceled in Rio and Sao Paulo, where governor Joao Doria also scrapped the holiday for civil servants, but there’s concern travel and large gatherings over the four-day weekend will increase transmission.

The South American country is prepared to skip this year’s traditional Carnival street celebrations and parades for the first time, with all activities canceled to avoid large gatherings in Brazil’s main cities.

As of Feb 22, travelers arriving in Canada will soon have to foot the bill for a pricey hotel stay, Prime Minister Justin Trudeau said Friday. On arrival to Canada, airline travelers will be required to spend the first three days of a 14-day quarantine at a supervised hotel for a cost that’s expected to be upwards of C$2,000 (US$1,580 USD).

They’ll also need to pay for a COVID-19 test at the airport, and for another test near the end of the full quarantine. Rules for travelers arriving by land have also been tightened. “These border measures will help stop the spread of COVID-19 and new variants,” Trudeau said.

Chile’s President Sebastian Pinera on Friday received the first dose of the CoronaVac vaccine developed by Chinese pharmaceutical firm Sinovac against the novel coronavirus disease, along with those aged 71 and over.

While visiting a community healthcare center in the southern region of Los Rios, where the president spends his austral summer vacations, Pinera joined more than 1.5 million Chileans in receiving at least the first dose of the vaccine.

The president took the opportunity to send a message of confidence to the public regarding the application of Sinovac’s CoronaVac vaccine, the one most used as part of the national vaccination drive.

“I want to tell all my compatriots that this vaccine is safe, it is effective, and we have made an enormous effort to be able to vaccinate all Chileans,” Pinera told reporters at a press conference after getting vaccinated. 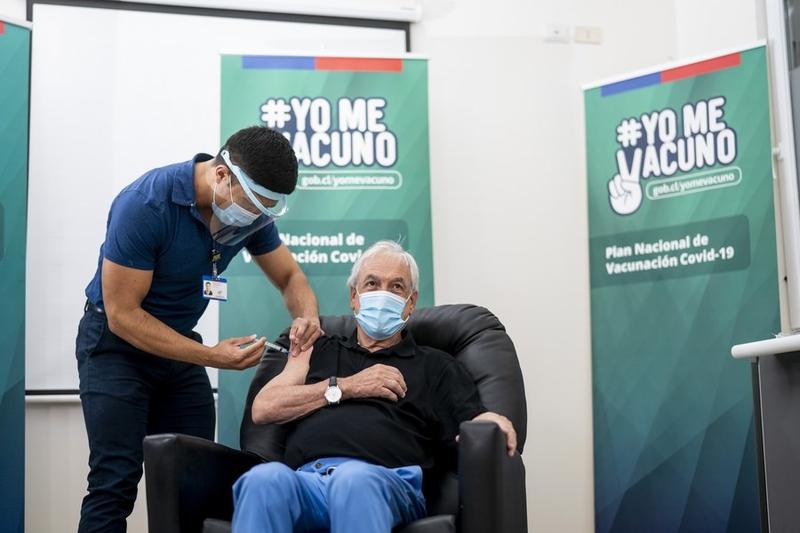 Cuba’s Ministry of Public Health on Friday reported 823 cases of the novel coronavirus infection in the last 24 hours, bringing the total number of confirmed cases to 36,595, in addition to four deaths for a total of 257.

“The February figures continue to be concerning, despite all the control measures implemented,” the ministry’s national director of hygiene and epidemiology Francisco Duran said during the daily report, noting that the 9,003 infections recorded in the first 11 days of February represented more than half of those detected last month.

In its daily pandemic report, the ministry said 42 more patients died in the same period, raising the death toll to 10,503, though another 4,717 suspected coronavirus deaths put the unofficial toll over 15,000.

The Ethiopian Federal Ministry of Health on Friday reported 686 new COVID-19 cases over the last 24 hours, taking the national count to 145,548.

The ministry said the COVID-19 death toll stood at 2,177, including six new fatalities recorded over the same period.

With 242 more recoveries registered, the total recovery tally came to 127,864, said the ministry.

Ethiopia, Africa’s second most populous nation, is among the countries hardest hit by the pandemic in Africa, after South Africa, Morocco, Tunisia and Egypt.

French health authority Haute Autorite de Sante recommended on Friday that only a single shot of COVID-19 vaccine should be administered to people who had been previously infected.

The HAS said in a statement that people previously infected retain an immune memory that calls for only a single dose.

“The single dose of vaccine will act as a reminder”, the health authority added.

The so-called R-Value for both the 4-day and 7-day interval remained below 1, while the number of patients in intensive care declined by 123, according to the latest situational report from the country’s health body.

Kenya expects to get its first COVID-19 vaccines by the end of this month and inoculate 16 million of its roughly 53 million people by June of next year.

The country will procure vaccines made by AstraZeneca Plc, Pfizer and Johnson & Johnson, and any others in the Covax facility, Health Secretary Mutahi Kagwe said Friday in a statement.

The government says the real number of infected people and the death toll in Mexico are both likely significantly higher than reported levels.

According to a statement by the Ministry of Health, the death toll mounted to 8,450 as 10 more COVID-19 patients died in the last 24 hours.

The total number of recoveries from COVID-19 in Morocco increased to 457,956 after 631 new ones were added, with 501 people still in intensive care units, the statement said.

The Swiss government had originally said it would announce on Feb 17 a decision on whether to ease restrictions in March on store and restaurant closings as well as work from home recommendations.

Five major retail associations said in a letter to health authorities that their members – many of which already carry out annual inoculations of staff – could administer COVID-19 jabs to their workers to ease the pressure on the health service.

Companies including El Corte Ingles, Carrefour and IKEA, said they could operate in strict compliance with the national vaccination strategy.

Although Spain initially said its primary-care network could handle the vaccination plan, an acceleration in vaccine deliveries expected in the second quarter after recent delays is prompting regional authorities to consider converting big venues into makeshift injection centres.

A healthcare worker attends to a patient at the Portimao Arena sports pavilion converted in a field hospital for Covid-19 patients at Portimao, in the Algarve region, on Feb 9, 2021. (PATRICIA DE MELO MOREIRA / AFP)

With 149 new deaths recorded in the last 24 hours, the total number of coronavirus-related deaths in Portugal has risen to 15,034 on Friday, according to the Directorate-General for Health (DGS).

Data from Portuguese health authorities showed that among the total deaths from the virus, 13,177 were over 70 years old.

The US Centers for Disease Control and Prevention on Friday issued new guidance for US schools to reopen, recommending universal mask-wearing and physical distancing as key COVID-19 mitigation strategies to get children back in the classroom quickly.

The guidelines which also emphasize the need for facility-cleaning, personal hygiene and contact tracing, are intended to give school districts a road map to bring the nation’s 55 million public school students back to classrooms without sparking COVID-19 outbreaks.

The agency also said school reopenings should not be conditional on teachers’ access to COVID-19 vaccines, but strongly recommended US states prioritize teachers and school staff for vaccination.

Another 15,144 people in Britain have tested positive for COVID-19, bringing the total number of coronavirus cases in the country to 4,013,799, according to official figures released Friday.

The latest figures were revealed as Britain’s coronavirus reproduction number, also known as the R number, has fallen to below one for the first time since July 2020.

The R number represents the average number of people each COVID-19 positive person goes on to infect.