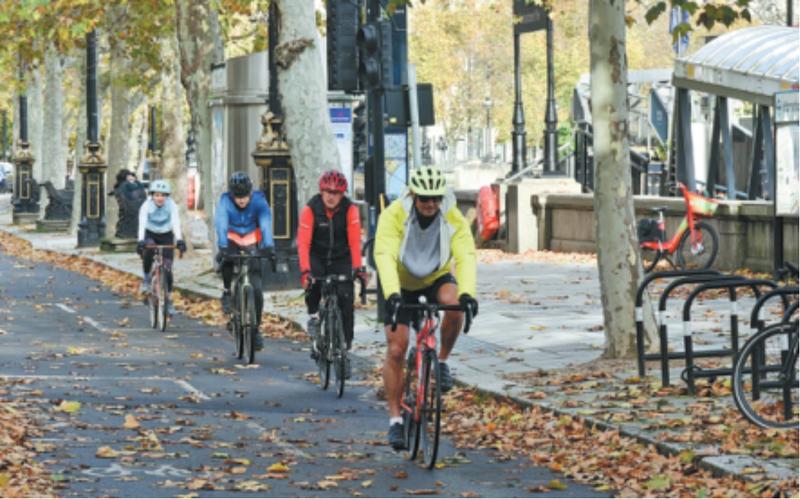 The authorities are set to invest US$234 million into high-quality cycling and walking infrastructure across England. (MATTHEW CHATTLE / BARCROFT MEDIA / GETTY IMAGES)

Cycling is enjoying a renaissance in the United Kingdom as people shun overcrowded public transport and cramped sidewalks during the novel coronavirus pandemic in favor of the calm of the open road.

It is a boom that has led Halfords, a British retail giant specializing in car parts, camping equipment, and bicycles, to announce a doubling of its half-year profits, and an intention to hire 1,500 new staff.

The company’s performance is in marked contrast to that of many other enterprises that have struggled to survive two national lockdowns in the UK aimed at preventing the spread of the virus and the COVID-19 disease it causes.

ALSO READ: England to use testing to shorten quarantine for arrivals

We are very pleased to have achieved such a strong first-half performance against the backdrop of one of the most challenging trading environments in recent history.

Graham Stapleton, Halfords’ chief executive, told Sky News: “We are very pleased to have achieved such a strong first-half performance against the backdrop of one of the most challenging trading environments in recent history.”

He said the company had to scramble to find “more stock from existing and new suppliers” in order to keep up with demand and has been importing between 20,000 and 30,000 bicycles a week to supplement those made in the UK.

The only downside for the company was that demand for automobile products crashed by 24 percent during the UK’s first national lockdown.

The company’s stores have remained open during both of the UK’s national lockdowns because they were classified as “essential”. All stores deemed nonessential were ordered to close.

The company has also performed well beyond its brick and mortar outlets, with online sales surging by 148 percent this year.

The Guardian newspaper said the boom has prompted the company to plan to create 1,500 new jobs, mainly focused on supporting the sale of electric vehicles, electric bikes, and electric scooters.

News of the growth in the company’s cycling business and of its increasing focus on electric vehicles comes days after the UK government announced its plan to bring forward to 2030 a prohibition on the sale of new fossil fuel vehicles.

The government is also understood to be introducing new subsidies to encourage the use of bicycles and electric vehicles.