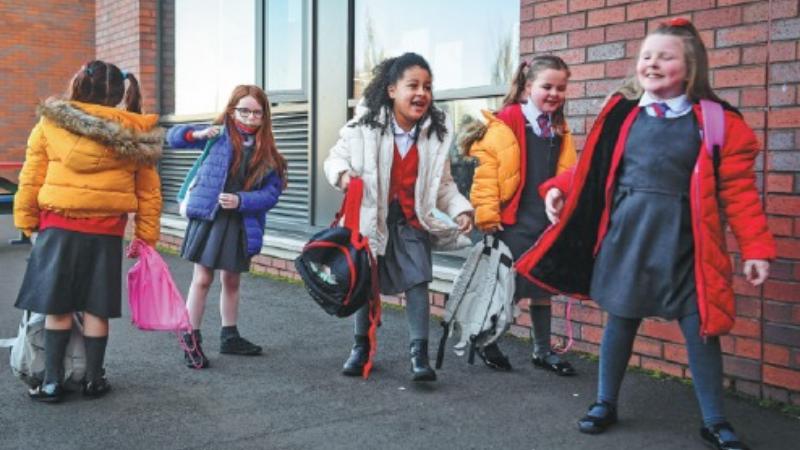 Children arrive at Clyde Primary School in Glasgow on Feb 22 as schools in Scotland started to reopen to more of the youngest pupils in an easing of the coronavirus shutdown. (PHOTO / AFP)

Schools across England will reopen on March 8 as part of the government’s so-called roadmap out of lockdown, which aims to have something like normal life back again for the whole of the United Kingdom by early summer.

Speaking in the House of Commons on Monday, Prime Minister Boris Johnson called the measures “a one-way road to freedom”.

Scientific evidence, he said, “shows we cannot escape the fact that lifting lockdown will result in more cases, more hospitalizations and sadly, more deaths and this would happen whenever a lockdown is lifted.

“Whether now or in six or nine months, because there will always be some vulnerable people who are not protected by the vaccines.”

However, he said, the “resolve of the British public and the extraordinary success of our (National Health Service)” meant gradual changes could be made.

The newly-announced measures are only applicable to England. The devolved authorities in Wales, Scotland and Northern Ireland will oversee their own reopening

At the same time as schools reopen, outdoor recreation will also be allowed again. At the end of March, when the school Easter holidays begin, outdoor sporting facilities will be reopened. Groups of up to six people, or two households, will be allowed to mix outside.

If that works, the second phase of reopening would be on April 12.They will include nonessential retail, and places such as hairdressers, libraries, zoos and indoor leisure facilities, including swimming pools and gyms, and self-contained holiday facilities.

There will be five-week gaps between the easing stages, allowing four weeks to examine the latest data, and an additional week of notice for businesses that will be permitted to reopen.

The newly-announced measures are only applicable to England. The devolved authorities in Wales, Scotland and Northern Ireland will oversee their own reopening.

The BBC reported that Scotland’s first minister, Nicola Sturgeon, will announce her plan on Tuesday, but it would not include hard and fast dates, and there may be localized restrictions.

Mark Drakeford, first minister of Wales, tweeted: “Here in Wales, we announced last week that we’re using the next 3 weeks to get more students back to school/college, and looking at options for reopening shops and hairdressers.”

If things go according to plan, it is hoped that the roadmap might be completed by late June, and by the end of July, every adult in the UK should have been offered a COVID-19 vaccine.

Speaking on Sky News before Johnson’s announcement, Vaccines Minister Nadhim Zahawi said the decisions were being taken with a degree of cautious optimism.

“Suffice to say, the evidence looks good,” he said. “We wouldn’t be in this place this morning to be able to say that we’re going to reopen schools… if we’re not confident that actually the vaccine program is beginning to really bear fruit.”

There are fears that coming out of lockdown could see an increase in violent crime, as the closure of schools and youth facilities for so long have put many vulnerable youngsters at greater risk of being drawn into a life of crime.