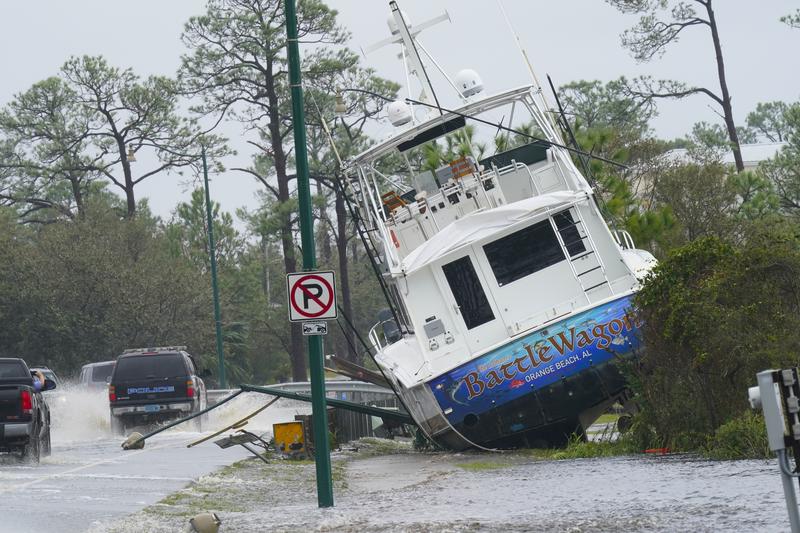 A boat is washed up near a road after Hurricane Sally moved through the area, Sept 16, 2020, in Orange Beach, Alabama. (PHOTO / AP)

PENSACOLA – Hurricane Sally uprooted trees, flooded streets and cut power to hundreds of thousands of homes and businesses on Wednesday as it brought what the US National Hurricane Center called “historic and catastrophic” flooding to the Alabama-Florida coast.

Sally, which made landfall early on Wednesday near Gulf Shores, Alabama, as a Category 2 storm on the five-step Saffir-Simpson scale of intensity, was downgraded in the afternoon to a tropical storm as maximum sustained winds dropped to 113 kph.

The storm is believed to have killed one person in Alabama.

“We had a body wash up, we believe it was hurricane-related, but we have no definitive proof of that right now,” said Trent Johnson, a police lieutenant in Orange Beach, Alabama.

Some parts of the Gulf Coast had been inundated with more than 46 cm of rain over the previous 24 hours, with more precipitation expected as the storm’s winds slow further, the National Hurricane Center (NHC) said.

The coastal community of Pensacola, Florida, experienced up to 1.5 m of flooding, and travel was cut by damaged roads and bridges. More than 500,000 homes and businesses across the area were without power as the storm knocked over stately oak trees and tore power lines from poles.

Several residents along the Alabama and Florida coasts said damage from the slow-moving storm caught them off guard. 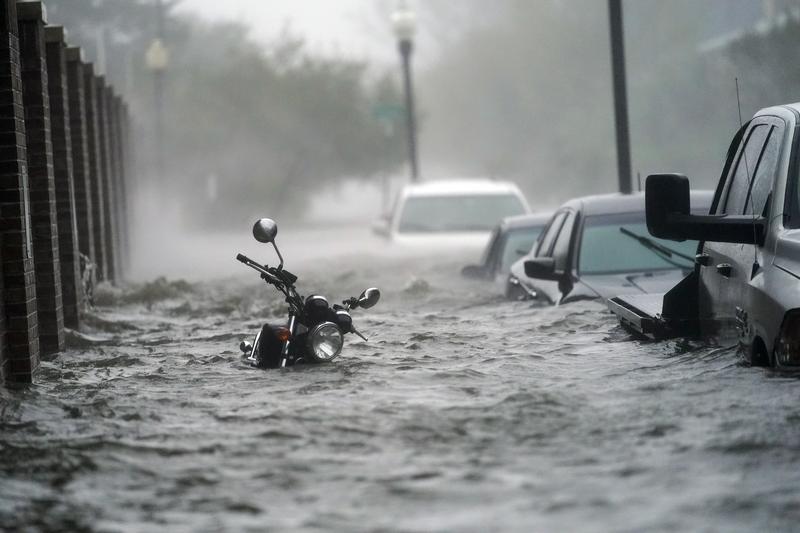 Cars and a motorcycle are underwater as water floods a street, Sept 16, 2020, in Pensacola, Florida. (PHOTO / AP)

Hurricane Sally, which made landfall early on Wednesday near Gulf Shores, Alabama, as a Category 2 storm on the five-step Saffir-Simpson scale of intensity, was downgraded in the afternoon to a tropical storm as maximum sustained winds dropped to 113 kph

Jordan Muse, 35, was working the 3-11 a.m. shift at the downtown Holiday Inn in Pensacola, Florida, when flooding peaked at about 8 a.m. The hotel was without power and water.

“Our manager didn’t think it was gonna be this bad. It was just so much rain and the winds were tremendous,” she said. The hotel had some supplies, but Muse said people quickly took everything that was available.

“The rain is what stands out with this one: It’s unreal,” said Cavin Hollyhand, 50, who left his home on a barrier island and took shelter in Mobile, Alabama, where he viewed the damage on Wednesday. Some isolated areas could see up to 89 cm of rain before Sally is done, the NHC said.

On landfall at Gulf Shores, Sally’s winds were clocked at 169 kph. Along the coast, piers were ripped away by the storm surge and winds.

Alabama Governor Kay Ivey told residents not to go outside to check on damage unless necessary, and to stay away from live power lines and fallen trees.

“We had strong winds for a long period of time,” said 38-year-old Grant Saltz as he took a break from clearing debris outside his Mobile restaurant. “Instead of a few hours, we got it for 12 hours.”

In Pensacola, where wind gusts were clocked at 124 kph at one point, images on social media showed major floods. One witness reported hailstorms in the city as well and the NHC warned of possible tornados.

Pensacola police warned of high winds and urged residents not to drive around looking at damage.

Electrical crews from other states arrived in Pensacola as utilities began restoring power to about 570,000 homes and businesses in Alabama and Florida, according to local utilities.

“This year we’ve just got hurricane after hurricane,” said Matt Lane, 23, a member of a crew from New Hampshire Electric Coop, who arrived late on Tuesday directly from Hurricane Laura recovery efforts in Texas. 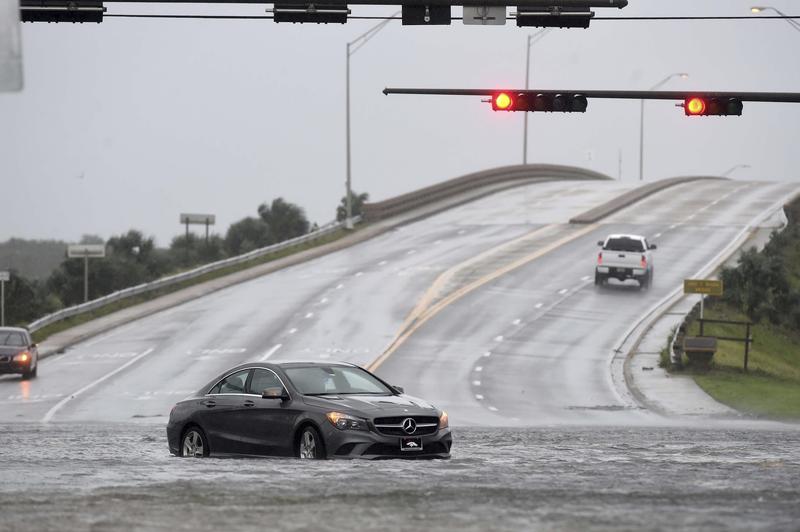 A stalled car sits near the intersection of US Highway 98 and Santa Rosa Boulevard near Fort Walton Beach, Florida, on Sept 16, 2020. (PHOTO / AP)

“We’ve only got one name left,” said Jim Foerster, chief meteorologist at DTN, an energy, agriculture and weather data provider, referencing the procedure to name storms and the prospect of running out of letters. “That’s going to happen here soon, Wilfred, and then we’ll be into the Greek alphabet.”

Hurricanes have increased in intensity and destructiveness since the 1980s as the climate has warmed, according to researchers at the US National Oceanic and Atmospheric Administration.

Damage from Sally is expected to reach US$2 billion to US$3 billion, said Chuck Watson of Enki Research, which tracks tropical storms and models the cost of their damage. That estimate could rise if the heaviest rainfall happens over land, Watson said.

As the storm moved east and inland, ports on the western Gulf Coast were reopened to travel and energy companies were beginning to return crews to offshore oil platforms.

Sally shut more than a quarter of US Gulf of Mexico offshore oil and gas production. Two coastal oil refiners halted or slowed operations, adding to existing outages from last month’s Hurricane Laura and demand losses from the coronavirus pandemic.